Luxe leaped into Tuesday evening as Chloé Laing popped down to the ballet for an evening of fabulous fairytales and sparkling scores.

The last in the trilogy of BalletLORENT’s productions of the Brothers Grimm fairytales is a tale of longing, heartbreaking desperation to belong and the devastatingly raw emotions human beings experience in life. We caught it at an intimate screening at Tyneside Cinema, the connection from the audience to the performance feels just as powerful as though you are sat there at the show.

Artistically directed by the immensely talented Liv Lorent, and scenario written by Poet Laureate Carol Ann Duffy, the production is a unique take on the fairytale classic and one that pulls deeply on the heartstrings from the onset and throughout. Rumpelstiltskin is a young prince who is the product of a mesmerising love between the King and Queen of the land. The giving of his life takes away his mother’s as the Queen dies and subsequently the King drowns in a pool of devastation and grief. The loss of the Queen causes him to reject his son, naming him as the undesirable and unwanted Rumpelstiltskin and casts him from the castle walls to live in solidarity. He interacts from a young age with the Shepherd’s daughter who shows him kindness which will later in Act 2 be returned. This interaction forms a bond that seals the lead performers right from the early stages. 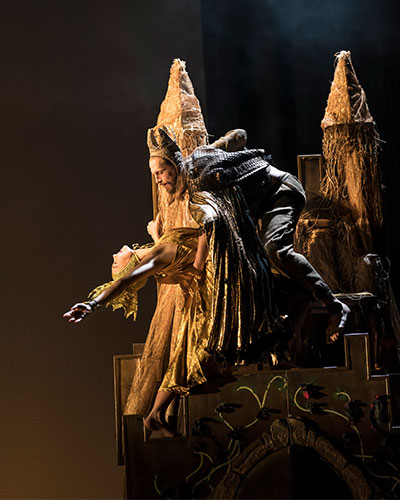 The King & The Queen

The King with baby Rumpelstiltskin

Liv Lorent’s husband and Game of Thrones star, Ben Crompton narrates the ballet. As Liv explains: “Ben worked very strongly with me to find and make sense of the Rumpelstiltskin film and find a real vivid connection. It was Ben’s idea to use a young Rumple and young Shepard’s Daughter as a recall memory back which was very strong and very powerful.”

The two inevitably reconnect in Act 2 where the productions protagonist Rumpelstiltskin helps the Shepherd’s Daughter to spin straw into gold for the King in a stunningly protective deal. It is not like your run of the mill Rumpelstiltskin tale as it humanises the rejected prince and evokes deep emotion from the start which Liv and Carol Ann have together beautifully created. The decision to gift Rumpelstiltskin’s character with a romantic and heroic complex is warmly welcomed. 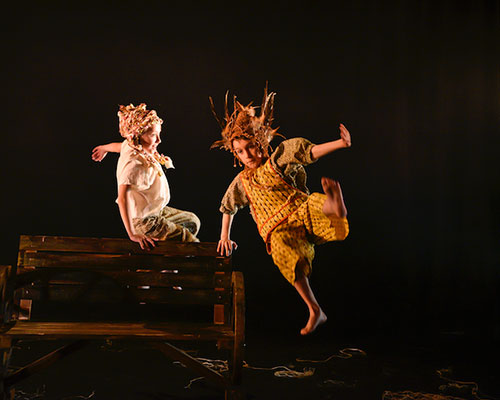 Liv shares more on this process: “I’d say all of us including Carol Ann and I are very keen on celebrating both the outcast and the antihero – the one who is not as popular or loved – and finding the compassion and the beauty within. We are all messy and we are all human beings. The King isn’t just an outright baddy, he is a grief stricken man and we have all been there. It is a sense that bad things happen to good people and it is very complicated. Having done the back story of Rumpelstiltskin, the way we did it would have been a terrible shame for him to have torn himself to pieces.” 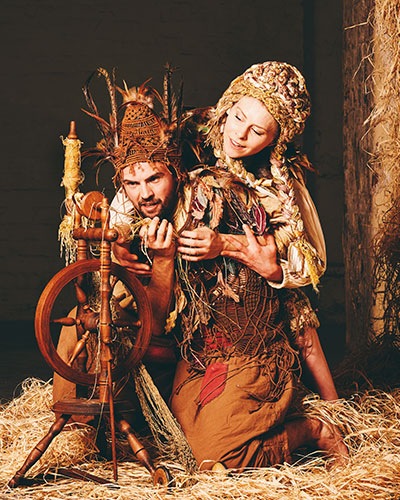 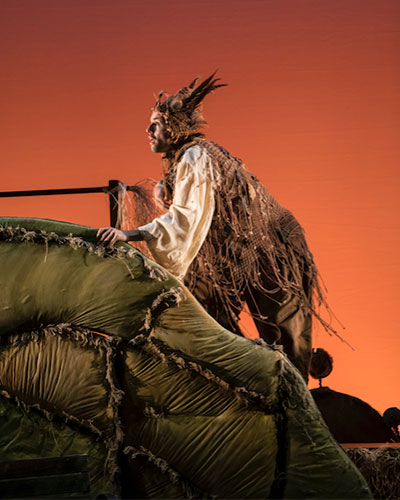 The cast is a star-studded collaboration of the best in the business, with actor and Liv’s husband Ben Crompton (known from Game of Thrones, Man Stroke Woman, Pramface and many more) who narrates the performance, five-time BAFTA nominated composer Murray Gold (Doctor Who) whom composes the highly energetic and emotive score, and the enchantingly talented Gavin Coward (as Rumpelstiltskin), Natalie Trewinnard (as The Shepherd’s Daughter) and John Kendall (as the King).

Liv shares with us how they chose the local cast for the production: “We know we will always find an amazing cast here. We make the bulk of the performance in Byker and for example, all the older ladies are from Benwell, so we don’t make them get two buses, one to town and one out to Byker we get them a taxi and help them carry their bags. They are all so charismatic and so amazing on stage and we just utterly loved having them in.

“It’s the same with the children. Gavin and Natalie – the young leads, the protagonists – are the ones doing a lot of the work. They go into the schools; they do the workshops and meet the children. They saw around 500 children over six schools,” says Liv.

The casting process also contributes to the performance of the children.

“Most of them have never been on stage before, they don’t know how to get giddy about it. They are not all from privileged upbringings and so the places we are going are where the kids are not doing expensive ballet lessons or attending expensive schools and extracurricular activities.”

Gavin who plays Rumpelstiltskin adds: “It’s very difficult to choose because each child has something. It is so clear that they are hungry to dance, so it’s just guiding them through some structured games and improvisations. It gets very creative in the workshops – it isn’t just sit and learn this routine, we encourage them to be raw and expressive.”

The collaboration of cast, emotive sound score and sensational narration all bounce off each other to create a truly striking and dazzling piece.

You feel as you you are part of something when watching the performance. There is a strong sense of family amongst the cast – the characters and the production as a whole. Immense nurturing and care has been added to every aspect of the production to make it the stunning heartfelt tale that it is.

The narration by Ben is truly sincere and dedicated to telling the tale in the moments where the dance can’t speak, which is few and far between.
On nailing down the narrating Ben said: “We did a fairytale back in 2006 and so we knew we wanted that warm and engaging quality – and that ties in with how Malcolm and Michael work with the lights.

“It’s funny because we recorded it predominately in London. My friend Shaun Dooley, who is also an actor, came in as an outside ear and revised it with m

“Inevitably when we put it together and Murray brings the music, you suddenly find pieces that don’t work and you might have a sentence that is a bit too long or you need to reintroduce the characters name at the beginning. So a week or two before, we ended up going to Murray’s basement hotel and bought a cheap – well by Murray’s standards – microphone and set up…” jokes Ben.

Murray steps in… “This is a typical BalletLORENT thing. Two days before the show opened and Ben says ‘you need to replace some of the text’ and we didn’t have a mic so I went off to buy one.”

Ben adds: “And we were in this one room hotel with Albi (Liv and Ben’s son), Gemma, who Murray met through one of the productions, and their daughter Maisie. So there’s a few takes where at the end you hear ‘ehhhh’ from her.”

The togetherness amongst the cast is what makes the performance what it is. The dedication and flexibility to change has made the end result something totally breathtaking to watch.

It’s a lovely and heartfelt production that is perfect for all ages to enjoy. It’s a seamless introduction to ballet for newbies – but there is depth and immersion that dance enthusiasts will fall in love with.

The stage version of Rumpelstiltskin will tour to middle and large scale venues across the UK throughout spring and autumn 2018. Including Pitlochry Festival Theatre, Sadler’s Wells, Lawrence Batley Theatre and The Lowry.

The film will be streamed live on Facebook on Friday 8th December 2017 at 6pm and can be found also on BalletLORENT’s Youtube channel.