As one of the most annually anticipated attractions in the region prepares to launch, Fenwick Newcastle has shared the top ten things you need to know about what has become a much-loved North East tradition.

We are of course talking about the Fenwick animated Christmas window, which has been illuminating the busy shopping thoroughfare of Northumberland Street for over 45 years.

The magical moving display at the flagship department store in the Fenwick group is expected to attract more than 2,000 spectators on its opening night when the closely-guarded theme is revealed at long last.

Visitors who first came to see the windows 30 or 40 years ago have since brought their children and grandchildren to experience the enchanting atmosphere together, often travelling miles to view it up close. 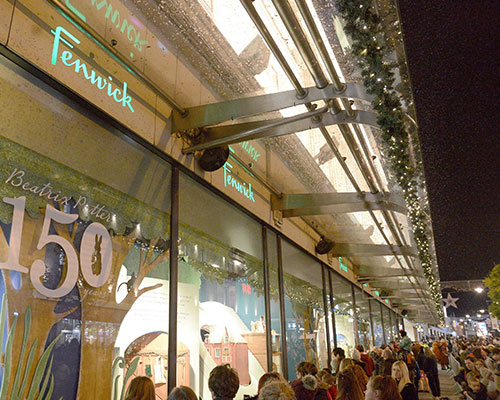 The complex and detailed process involves elaborate storyboards designed in collaboration with German company One World Studio, which creates displays all around the world. The transition from initial sketches to the finished product is the combined effort of a skilled team of artists, animators, technicians, musicians and window dressers.

When the directors of Fenwick took the bold decision to devote the entire window to animation, the debut window display was based upon the popular TV series Camberwick Green. Since then it has featured characters including Oliver Twist, The Snowman, Peter Pan, Alice in Wonderland and Santa Claus over the years.

Inspired by the 150th Anniversary of Beatrix Potter, 2016 saw the most popular of Potter’s much-loved stories depicted in the display, including the iconic Peter Rabbit in the first scene, followed by Jeremy Fisher, Jemima Puddle-Duck and the Tailor of Gloucester.

This year, the window will be unveiled on Friday 3 November at 5pm, bringing alive decades of tradition with another charming tableaux at the heart of Newcastle’s festive season.

10 things you need to know about Fenwick Newcastle’s animated windows:

1.    At 38 metres and with eight amazing scenes, the display is one of the largest Christmas showcases in Europe

2.    Up to 365 days and 3,500 hours of planning, building and working behind the scenes culminates in the big reveal on launch night

3.    Alice in Wonderland is the most featured literary adaptation over the years, appearing three times in reinvented scenarios

4.    The elaborate designs are built in a specialist German workshop in Berlin from which they make the 1,500km journey to Newcastle

5.    Five window dressers and carpenters install all the intricate masterpieces and mechanisms in the display over five days

7.    The first animated Fenwick window was created in 1971 after the display team were impressed by the spectacular windows they admired in Paris

9.    The window provides 840 hours of exciting entertainment over the festive period

10.  From the window launch night it’s only 52 days until Christmas!

Luxe will be posting live on social media from 5pm today.