Life is all about rugby and robust red wines for Newcastle Falcons’ fly half Toby Flood. Not necessarily at the same time. He’s brought a passion for the wine business back to Newcastle after three seasons with Toulouse. He tells Elysia Agnew how it feels to be back on home turf.

His tan may be fading but Toby Flood’s cellar still holds the best memories of his three years spent playing rugby for Toulouse.

As stunning as life was in the cosmopolitan French city they call La Ville Rose, there was something compelling about the open space of Northumberland that drew Toby back, and he made his return to the region with Newcastle Falcons this summer.

He returns with the best of France; shares in a wine business, an ever-growing knowledge of vinviculture and a determination to encourage people to ‘drink less, drink better’.

A glass of Bordeaux is a post-match pleasure but it’s a case of coffee in the cup when we meet at Kingston Park Stadium – the home of the Falcons – catching up after a morning on the training pitch. Rugby kit is swapped for downtime gear and conversation inevitably leads to the joys of the great British weather.

“It’s definitely a bit colder. I’ve lost my tan, but it’s nice to be back. It’s nice to see some familiar faces around the place.

Making the move from Toulouse was a tricky one, but came at the right time,” says Toby.

Known to locals as La Ville Rose (or The Pink City) thanks to its beautiful pink stone buildings, it’s a cosmopolitan haven of market squares and cobbled streets awash with chic city culture, inspiring architecture and authentic cuisine. So after three years of warm weather and luxury living in the south of France, just what made the 32-year-old, wife Sally and son Rafe return to his hometown club in the North East?

“Quite a few things really,” he says.

“After a couple of years in France, we were umm’ing and ahh’ing at whether we wanted to stay or go.

“The lifestyle over there was great, but the rugby could have been better.

“I just wanted to make the right decision and get an idea of what I wanted to do for my last or second last contract in the game. I had long conversations with Director of Rugby Dean Richards and Head Coach Dave Walder and probably the biggest thing for me was the direction and desire of this club.”

With a strong support network, good coaches and fond memories of growing up in the area, if an opportunity came up at the right time, returning home was always part of the plan.

It is certainly a home-coming. Born in Surrey, brought up in Morpeth and a product of the Falcons Academy, this area forms much of what the fly half calls ‘home’.

“My upbringing was pretty rural,” he recalls.

“I grew up in a place near Morpeth. It was one of those where the door was open for me when I got back from school and I was kicked out to go take care of myself and then the food would be on the table at half past seven.

“I spent a lot of my time outdoors. I didn’t have a computer, I remember desperately going round my mates houses and wanting to play on their computer games, but they didn’t want to – it was normal to them – they wanted to go out and play cricket or football.

“It was just totally outdoorsy and we spent a huge amount of time doing as much as we could outside.

“I fell into sport on the back of that. It was just a natural progression – I was out kicking a ball around and that fell into rugby and football. I had a very sport-filled childhood because ultimately I was out on my own playing all of the time.”

Toby was a product of the Falcons Academy. With inspiring school coaches, being part of successful university teams and picking up valuable experience at club level, he found himself part of the Falcons first team at the age of 19.

“It was all thanks to a chap called John Fletcher, the Academy Coach at the time, and a guy called John Davies who was my school coach.

“I played my debut at the Falcons through no fault or ability of my own. It was mainly due to the fact that we had nobody left on the field,” he laughs.

The Newcastle Falcons had a promising season last term, finishing eighth in the league – the highest position they’ve finished in a long time.

“There’s going to be a level of readjustment for the squad,” says Toby.

“But we’re no longer going to be flying under the radar. We need to keep doing what we’re doing and keep going with those positive situations we find ourselves in,” he adds.

As fly half, Toby is the chief decision maker in the game. But being the dominant figure is something that has developed in his game plan over the years and is not necessarily part of his personality, he explains.

“It’s kind of a chicken and egg scenario; I’m not too sure what came first,” says Toby.

“I don’t know if I was like that as a child so therefore I naturally progressed to play that position, or whether I just became accustomed to it through my rugby role.

“My feeling would be the latter. I think the more experience you have with rugby, the more decisions you have to make and the more people look to you. I think that has probably transferred to my personal life more than I’m socially aware of.”

Toby was playing in Newcastle at the time of his first international call up – in the fold for the autumn internationals in 2006. It was a proud moment in his playing career, then going on to pick up 60 caps for England.

“My first call up was against Argentina. I played a couple of guest test matches at that time, then I came back and played the Six Nations,” he explains.

“The decision to leave Newcastle and move down to Leicester was a really good one for me at the time as it pushed me to the forefront of decision making and a cut throat part of English rugby.”

Let’s talk France. Luxury living in Toulouse, well regarded rugby, vineyards and winter ski trips. The lifestyle was great – something he could get used to – but it was the quality of the rugby that brought him back home.

“We went to Toulouse on the back of going to what was, and still is statistically the biggest club in France and Europe, having won four Heineken Cup trophies.

“It was a timing thing really. It was all about the experience – we were never quite sure whether it was the right decision or not, but I think sometimes you’ve just got to jump in.

“We may never have had the opportunity to go and work abroad again. So a large part of it was that we just wanted to go and experience some different culture.

“We loved our three years out there. Lifestyle-wise, it was incredible. The rugby was fairly frustrating, just because of the level of coaching and fitness – it just isn’t what it is over here. But the time we spent socialising and the weather and what have you, we loved it. You sort of forget about the ability to just pack up and go skiing for the weekend in the winter months. We could get used to that.” 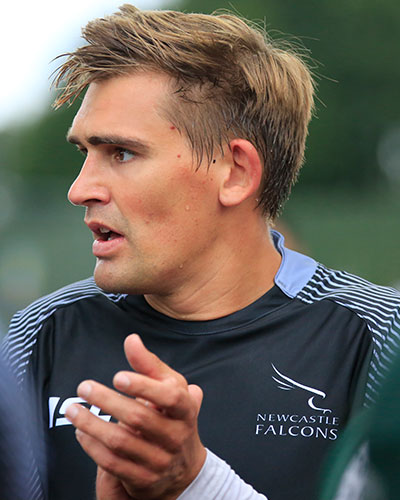 Toby arrived in France with no real knowledge of the language. A bit of studying here and there, but a far cry from tackling the tenses and the speed of conversation.

“I just tried to take it day by day, and by the back end of three years I understood absolutely everything,” he says.

As you become accustomed to a new culture, a new language and a new way of life, it might be that hobbies change too. Toby became quite the wine man during his time in the south of France. In his new environment, downtime often meant swapping rugby fields for grape-bearing vines. Something he has since become heavily involved in. Very much a luxe passion of his.

“A friend of mine in Bordeaux decided to go into the wine business,” he says.

“He now runs a company called 20h33 – 33 being the postcode for Bordeaux, so it mainly concentrates on the local stuff.

“I had an interest in wine before I went to France. I had a little cellar at home in the UK – nothing fantastic – but when I went to France it just really took off and I got a feel for the industry.

“I suppose the knowledge that they have over there comparatively is stark. They don’t understand when we ask for a merlot for example, because they can’t produce the same texture and quality every year, it all just depends on the weather for them. It’s a bit like farming over here. They see it as a crop.

“So I was interested in the whole process and then the opportunity evolved for me to get involved.

“We’re trying to get it up and running in the UK now. One of our players, Rob Vickers is having his testimony this year so we’re going to run a couple of casing events.”

Any more side projects up your sleeve, Toby? Both of his grandfathers were actors, one of them featuring in television drama, The Ratcatchers and the other a German actor who appeared in The Guns of Navarone. His grandmother was also in the industry. Should we expect a stage appearance soon?

“Absolutely not,” he laughs.

“It’s not for me. Both my grandfathers were actors, my grandmother was an actress and my parents both worked in theatre all of their lives, but luckily my sister and I didn’t get bitten by the bug. I suppose there is a level of performing in my role – so there is a bit of that but it’s not something I’m leaning towards in retirement.

“But in all seriousness, it’s nice to be back in the North East for that reason. I do enjoy it and Newcastle is a bit of an outpost in that sense; you’ve got all the theatres, you’ve got touring companies and you’ve got the West End productions comi

ng up here as well.

“So it’s probably increased my desire to go back out there and see stuff having three years’ sabbatical from it.”

Settling back in the North East, it’s a timely move for a traditional, family Christmas. But after spending the past three years in the beautiful mountains on the borders of France, just what does being back home at Christmas mean to the rugby star? And will there be any French influence?

“The beauty of having Christmas in France was that we got a bit of time off. So last year we went to a chalet up in the Pyrénées and had all the family there. My parents, my wife’s parents, our sisters, brothers, the kids – everyone. It was a classic family Christmas.

“So this year, sadly, I don’t think we’re going to better that. Everyone is going to stay put and it’ll be a quiet one. We play on the 23rd so we’ll get a couple of days off but will be back in on Boxing Day.

“You have to be a little bit careful at this time. What you don’t do is have a huge night out on Christmas Eve and eat yourself to death on Christmas Day because ultimately you’ll be training on Boxing Day and you’re going to be paying for it. So you have to be a bit modified in what you do – but it’s always great to spend a bit of time with the family.”