Geordie singer-songwriter and actor, Jimmy Nail is set to star in Sting’s debut musical, The Last Ship making its UK premiere in Newcastle next year.

“I’m thrilled to be back in the North East,” says Jimmy.

“I was born and raised in Benton, so it’s good to be back and it’s going to be great working at this theatre,” he adds.

The show opens on 12th March 2018 for a four week season at Northern Stage, ahead of a UK and Ireland tour.

The production, which was initially inspired by Sting’s 1991 album ‘The Soul Cages’ and his own childhood experiences, tells the story of a community amid the demise of the shipbuilding industry in Wallsend, with the closure of the town’s shipyard.

On the production, his involvement and his childhood, Sting says: “The story is set in Wallsend, which is where I was born and raised. It’s about the shipyard there. It’s a play about the importance of community, the importance of work and what happens to a community when work is threatened.

“It’s also a very entertaining, fun evening as well as being serious. I think this is the right place for us to be right now; we’ve been on Broadway, we’ve been to Chicago, Salt Lake City, Finland and now Newcastle,” he adds.

“I started writing about five or six years ago. For me it was a way of paying a debt to a community that produced me – honouring that community. I was near the shipyard watching those men every morning. I thought at one point in my life that was what my life would be. It was the last thing I wanted so I dreamed something different. I dreamt I’d be a sining – I’m still dreaming that.

“I started my professional career as a musician under this stage in 1974. I was the bass player in a show called Joseph’s Technicolour Dreamcoat. I used to work here, so this is me coming back.”

When Gideon Fletcher returns home after seventeen years at sea, tensions between past and future flare in both his family and his town. The local shipyard, around which Wallsend has always revolved, is closing and no-one knows what will come next, only that a half-built ship towers over the terraces.

The show is directed by Lorne Campbell, the artistic director of Northern Stage, with set design by the Tony Award-winning 59 Productions. 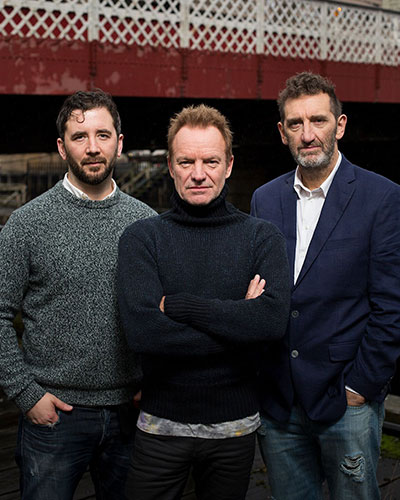 One of the country’s most exciting and acclaimed theatre directors, Lorne Campbell had his first professional job as an assistant director at Northern Stage, before returning as artistic director in 2013.

Discussing production itself as well as the score that’s got everyone talking, Lorne says: “We’ve just finished a week’s workshop on the show in it’s new version – we’ve been working with an incredibly group of musicians and performers from the North East.

“It’s about a very particular moment in British history. It’s set in 1986, it’s post the miner’s strike, it’s post the Falklands War. It’s at the very hype of Thatcherism and and the sustained assault on industrial Britain and the impact that that had on communities, on individuals, and the fabric of our whole society.

“What Sting and Jimmy have created is a truly remarkable score. It’s powerful, it’s emotional – it’s quite remarkably beautiful. And in that there’s an incredible story about hope and about people who in the very very darkest times, function as a community and find ways to preserve their dignity, to have control of their stories and to find a way forward – to survive, to endure and indeed to thrive out of that.

“To bring this story to Newcastle and the wider North East, feels incredibly exciting and powerful. We’re making the show here in the New Year. It will run at Northern Stage for a month and then we’re very much going to the post-industrial cities in the UK – Glasgow, Edinburgh, Leeds, Dublin, Bristol, Cardiff. It’s going to be an amazing three month tour.”

This personal, political and passionate new musical from multiple Grammy Award winner Sting, is an epic account of a family, a community and a great act of defiance. With original music and lyrics by Sting, The Last Ship also features a few of his best-loved songs Island of Souls, All This Time and When We Dance.

This is the proud story of when the last ship sails.

Tickets start at £10 and will go on sale to members on 2nd November and on general sale on 9th November.