A cool social space of a kitchen is the centrepiece of a dream home in Northumberland. Luxe paid a visit...

Many say that the kitchen is the heart of any home. It’s the place where mums feed small tums, where chums and family gather for ‘how-was-your-day’ catch-ups, where busy professionals chug back their morning caffeine and where ravenous, partied-out teens congregate in the wee hours.

A kitchen can set the tone for an entire household. And for Richard and Gina Hogg, theirs is very much the stand-out space within their home – a property that’s been transformed from quaint cottage to modern day power plot, surrounded by acres of lush land and blessed with breathtaking views of the Northumberland countryside.

The couple, who have been married just shy of 10 years, swapped their Newcastle penthouse for a life in the country back in 2010, moving into what had been both Richard’s parents’ former home since the 60s.

“It’s been a family affair since day one really,” says Gina, who works as an executive account manager. “Richard’s grandmother, Jean, moved into the adjacent farmhouse in 1969, before handing down the land to his parents. His mum and dad then built a little annex be

fore extending to create their own cottage.”

Years later, the pair moved in, living in the Morpeth home as it was for four years until their son, Michael, now five, arrived. It was then that the couple, who found themselves drowning in toys and longing for more space, decided to put their stamp on things.

Enlisting the help of a local architect technician and interior designer, they embarked on a period of ravishing renovation in 2014 with the aim of creating a hot property that offered more room to breathe, work and play.

“It was an opportunity to create our dream home,” says Richard, managing director of local recruitment business, Jackson Hogg Recruitment. “We did exactly what we wanted and turned the cottage into our ideal property.”

The results of the miraculous makeover  means the Hoggs’ new-and-improved home is the stuff of any aspiring house builder’s dreams.

“Some of the biggest, and probably most challenging, changes were transforming the front and back of the house,” says Gina. “We knocked down the roof and front of the property to make way for striking gable end design.”

“We also extended at the back, adding a bright and airy orangery so that we had somewhere to retreat to at the end of the day to really appreciate the views.”

All rooms are neutral, painted in white, soft cream, light tan and browns the colour of milky coffee, creating the illusion of yet more space. There are rustic wooden beams in the living room and original stone peeking out here and there – a nod to the property’s rustic past.

The most impressive of the changes is a state-of-the-art, open-plan kitchen – Richard and Gina’s favourite space.

“It’s definitely the place in which we spend the most time,” Gina says. “It’s where we eat our meals and catch up, and where our son watches a lot of TV. We love that it’s a room of two halves; the kitchen, which is decked out with everything we need to cook and entertain, and the dining and relaxation area for kicking back.”

The pair joined forces with Raven Kitchen Design to bring their vision of a traditional style kitchen, with a glossy, contemporary twist, to life. 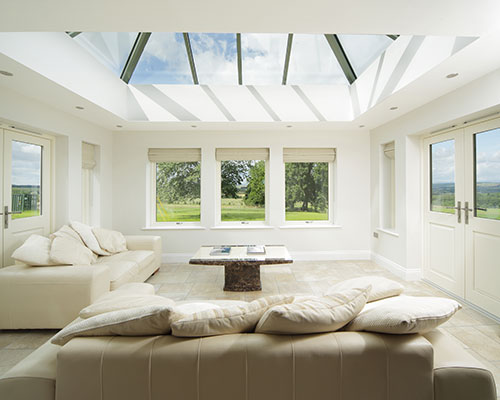 With father-and-daughter team, Tony and Hannah Raven, at the helm, the Blagdon-based business helps homeowners update their pads with fitted kitchens from cutting-edge German manufacturer SieMatic, as well as their own range of locally manufactured custom-made furniture – which is what they specified on this occasion.

Tony, already a pal of Richard’s, jumped at the chance of helping the pair create their perfect kitchen and, with the help of his daughter and a team of skilled builders, tilers and decorators, work soon began.

“Richard had always said he’d love one of our kitchens once he got married and had settled down,” says Tony. “So we were delighted to hear about the amazing alterations he and Gina were making.”

The pair knew what kind of style they were after: full-framed, painted and traditional, but with modern accents and fixtures. A fun change, according to Tony, for Raven, as the company is largely known for creating slick, contemporary spaces.

“Richard and Gina were keen to keep their range cooker and American style fridge/freezer, as well as incorporating a Belfast sink, and this largely influenced the design,” explains Tony.

“Initially, the idea was just to have the fridge/freezer free-standing on it’s own, but with some gentle encouragement Richard and Gina realised that by placing a tall storage unit either side and bridging across the top with another unit, it created a much more integrated look. That section almost reads as one piece of furniture now – a bit like a traditional press with a twist.”

“We also had to hide a large under-floor heating manifold, find space for an integrated microwave, a food mixer lift mechanism and space for a not inconsiderable quantity of wine bottles!”

“The soft colour scheme was very much their decision, but we encouraged them to use a contrasting granite on the large, central island – hence the beautiful river valley white surface supplied by Richard Hamblin of South Shields,” says Tony.

“The island dominates the space, but because of the pale granite, it doesn’t overpower and we loved how it turned out.”

At the request of Gina, all wall units have glass fronts with internal lighting, and the team also created a false chimney breast around the cooker, which serves as another of the kitchen’s real focal points.

The open plate rack, meanwhile, situated over the Belfast sink, adds some of that traditionalism that the couple longed for, while the use of plantation shutters either side of the windows, beaten metal handles and carefully-selected brick pattern tiles behind the range cooker all add a touch of luxury and modern edge.

“Overall, we couldn’t be happier with the outcome of the kitchen,” says Richard. “Working with Tony and Hannah was a total pleasure from start to finish – they made the process so straightforward and enjoyable – and there’s nothing we would change if we had the chance to do it all again.”