Martin Middleton is 43 and has a passion for classic motors. And tattoos. The dad-of-four was born and brought up in the North East and now his home is in Ebchester where he runs a tattoo studio. 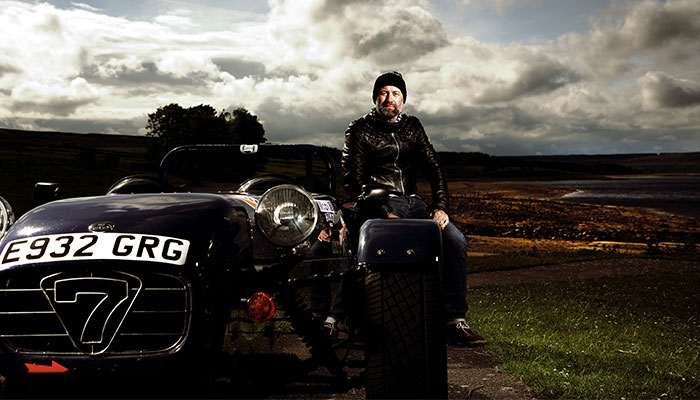 “Never had the urge to move away because in my opinion it’s a gateway to some of the best countryside in UK”, he concedes.

As a child his dad took him along to Croft racing circuit to watch one of his friends race Formula Ford.

“He wasn’t particularly great so inevitably my dad would have this little racing car in the garage for fibreglass repairs and paint.

“My passion is older vehicles as I think they provoke nostalgic feelings of a golden age of driving. I love the sense of achievement when a random stranger either takes pictures of your car or wants to know the back story behind it.”

Probably a Jaguar D-type in British racing green or and AC Cobra.

IN THE GARAGE AT THE MOMENT >>

Capt Slow definitely, but if I had to choose I’d rather be Steve McQueen or Jenson Button behind the wheel.

TRACKS OF MY TYRES >>

It has to be completing my first car restoration. It was a MGB roadster…previously I had no knowledge of car restoration, so just taught myself as I
went along with a bit help from dad if I wasn’t sure. It was a complete nut and bolt restoration… I perhaps became a tad obsessive as it was almost to good to drive. I was only 24 when I completed in a garage not much bigger than a shoe box. But I’ll never forget pulling it out of the garage for its first drive. The only thing that would have made it better was a bit dry ice when I slowly rolled out of the garage.

I keep the cars and bikes super well maintained as I enjoy working on them as much as driving them. But I’m not a believer in having a classic to sit in a garage and only come out for car shows. They are meant to be driven.

Earlier this year, thinking I’d have to sell them all after my divorce.