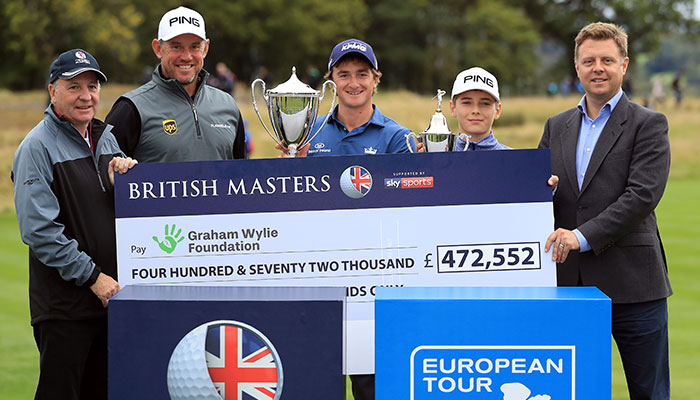 The Graham Wylie Foundation is set to benefit from more than £472,500 in its role as the official charity of the British Masters supported by Sky Sports at Close House, with the tournament leaving a lasting legacy in the North East.

As Paul Dunne wowed the British crowds with a flawless final round of 61 to secure his maiden European Tour title, tournament organisers were busy raising funds through donations and golf-related initiatives during the week, as the European Tour returned to the North East for the first time in 15 years.

Tournament host and Patron of the Foundation, Lee Westwood – who has been Close House’s Touring Professional since 2011 – threw his support behind the Foundation and founder Graham Wylie at the start of the week when he donated his winnings of £25,000 from the Hero Challenge.

As the local crowds streamed through the gates, with more than 68,000 attending over the course of the week, funds were also raised with ticketing revenue from the Hero Pro-Am on Wednesday, a Gin and Swing evening, golf competitions, and through a number of auctions held during the lead up to the tournament.

“This is such a phenomenal amount of money raised through various fundraising activities during the tournament,” said Wylie.

“This will leave a definite legacy in the north east which will help fulfil my charitable foundation’s aim to help, educate and inspire the children and young people of the North East.

“A special thank you to our Patron and Host Lee Westwood who also donated his winning prize money from the Hero Challenge.”

The European Tour Foundation will also benefit from the exceptional fundraising efforts at the British Masters supported by Sky Sports, with £60,000 of the funds raised by the Graham Wylie Foundation donated to the Foundation to ensure charitable initiatives and grants will continue to prosper in the communities in which the European Tour visit.

Tournament Director, Rory Colville said: “The response of the fans in the north east and beyond this week at the British Masters supported by Sky Sports has been simply incredible.

“The people of Newcastle have been extremely generous in their donations to the Graham Wylie Foundation, and in supporting Lee Westwood as tournament host, so we are delighted the European Tour Foundation can also be involved in further charitable initiatives moving forward as we look to leave a lasting legacy in the communities we visit.”