Luxe catches up with celebrity chef Michel Roux Jr. about mentoring, memorable foodie moments and his luxe things in life...

Charismatic celebrity chef Michel Roux Jr. has officially opened The Vault in Gateshead, a training facility for young people with autism and learning difficulties. The Vault is a vibrant American-style diner within the Rivers Edge Hotel. The restaurant’s aim is to help youngsters pick up real experience with a view to equipping them to work in the hospitality industry.

Michel Roux Jr. runs the two Michelin star restaurant, Le Gavroche in London and his family established the Roux Scholarship which has given some of the UK’s leading chefs their first step on the culinary ladder. Michael himself has mentored young people on a TV series’ including The Chefs Protégé and notably, Kitchen Impossible, where he helped young people with learning difficulties. He was also a former judge and presenter on BBC One’s MasterChef.

We check in at this new Gateshead venture to talk mentoring, memorable foodie moments and his luxe things in life.

Can you tell us a little bit about The Vault and your involvement in it?

My involvement was, first of all, to officially open it up, although it has been running for a while now. But I’m here to unveil the plaque at the front of the building, which I’m really honoured to have my name on – it’s fantastic!

It’s a project that I am very passionate about. It’s about getting more people into our industry – people with learning difficulties or a disability such as autism. I think that as an industry, the hospitality industry can do a lot more by bringing these people in. And John Heron at Rivers Hotel is proving that it is possible.

When did you first start mentoring young people with learning difficulties and what inspired you to get involved?

I did a TV show called Kitchen Impossible where eight kids (I call them kids because they’re younger than me), eight boys and girls that had different disabilities ranging from autism to Tourette’s and Down syndrome – a whole host of different disabilities. All of them were trying to get into the hospitality industry and hold down a job. So that really did interest me.

I do a lot of work with other charities – notably one called VICTA (visually impaired children taking action), which is about getting people with blindness or people who are partially sighted out and about and into sporting activities. So that’s something I’ve worked with in the past but autism is something completely different. And so I felt like when I did the show Kitchen Impossible, that there was unfinished business. That there’s still a lot more to be done – a lot more than we can do as an industry. And if I can highlight that and maybe change people’s perceptions of these disabilities then that will help in many ways.

So by coming here today and meeting John, meeting all of the boys and girls that work here, then that will inspire them and maybe help them to do even more, take on more people and ultimately maybe even open another place like this.

What advice would you give to youngsters starting out in the hospitality industry?

With learning difficulties, I would recommend coming to places like this, which are running as a business. This is not a charity, it’s real. And it’s that first step on the ladder to getting a job in the industry. For example, one of these guys gets a job behind the bar and once they’ve qualified here and worked sixth months to a year, then they could move on to another place because they’ve got the confidence, they’ve got the skill set and they’ve got the ability. 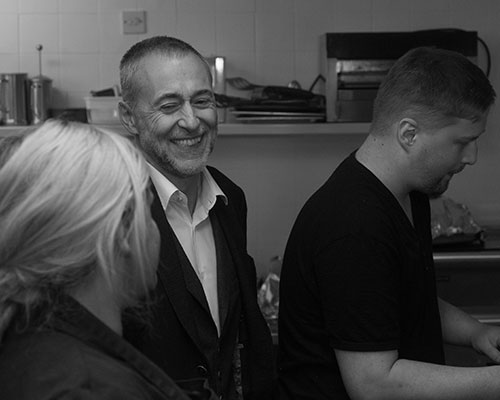 You started young. Tell us about your childhood food memories?

Oh gosh, I’ve got many. I think probably making and tasting vanilla ice cream with my dad when I was about six-years-old. Or going into the Forest of Dean in Kent with my grandmother and collecting mushrooms, wild strawberries, chestnuts – things like that. Foraging – which has become a very, very popular thing now. But I did that as a tiny toddler with my grandmother – it was just normal. I mean, we used to gather snails as well, and then eat them. The locals were like… oh those foreigners!

For example, when I last ran the New York Marathon I had planned to meet up with my wife at the finish line, but my wife wasn’t there. I waited for about half an hour and for some reason she still wasn’t there – and we were flying back to London straight afterwards. So I ran back to the hotel and to cut a long story short, she’d got lost and we were running very, very late to get into a taxi to get back to the airport to get on a flight back to London. I hadn’t had anything to eat after the run so I was going into a very bad, bad place. I was starting to go weak at the knees, shaking and not feeling well at all. So we were really cutting it short but before I jumped into the taxi I ran into a deli and asked for the typical New York sandwich which was the salt beef, pastrami on rye with mayo. And that first bite was just the best – I can still remember it now – it was staggeringly good.

Very often, the best food is just that moment in time!

I did the TV show up here, Hidden Restaurants. And Riley’s Fish Shack was just exceptional – everything was perfect. Cook House was fantastic too. There are some great hidden places to eat up here.

Your three luxe things in life?

Fine wines are a real luxury – because it’s not an everyday occurrence.

I do like to wear a nice suit – so a tailor-made suit is a treat.

And then the biggest luxury of all is your time – and that is something that is precious and is very, very difficult for me because I’ve got so much work that I do. So when I do grab time and I can put it aside for my wife, family and a bit of downtime.