THE STAR INN THE HARBOUR

Michelin star chef Andrew Pern is scattering his kitchen magic amongst the lobster pots in Whitby with his latest restaurant venture, the Star Inn the Harbour. Luxe paid him a visit. 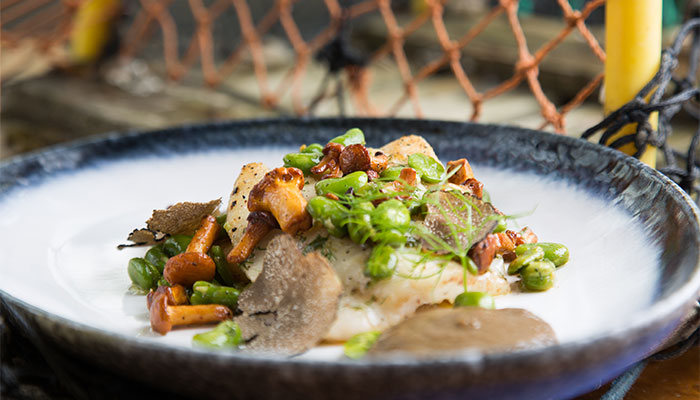 In the breeze of the Whitby air there’s simply no escaping the whiff of fish and chips. Every third person that passes seems to be clutching a polystyrene parcel of vinegar-soaked fresh-from-the-fryer pleasure.

Does this passion for a portion of cod and chips (scraps please), makes it the best or worst spot to set up stall (or high class restaurant)?

The town’s newest eating place is the very upmarket Star Inn the Harbour and with Andrew Pern at the helm, there’s the promise of a sprinkling of the Rick Stein magic that made Padstow the nation’s go-to foodie destination for all things fish.

Pern is the man who has Michelin star pedigree behind him with the whimsical and romantic gastro pub, Star Inn at Harome in North Yorkshire. More recently he has launched Star INN the City in York and made a foray into tapas and cocktails with Mr P’s Curious Tavern, also in York city centre. 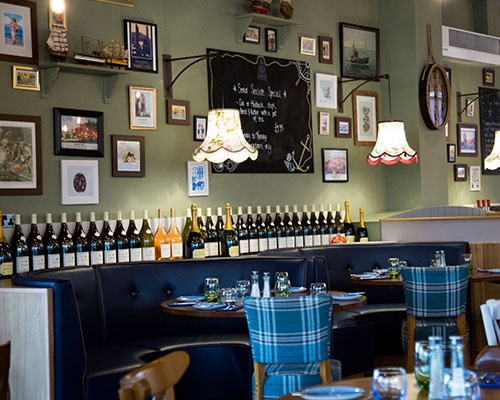 Launching a posh chippy in Whitby is something of a homecoming. He’s a Whitby lad (his parents still live in Sleights) who did his culinary training at Scarborough Tech.

The seaside restaurant is a dream realised, a stone’s throw from the harbour; so close that lobster pots from the fishing fleet find their resting place at the side of the restaurant, stacked up ready for another outing – once emptied of their luxurious gourmet catch.

Inside the restaurant – formerly the town’s tourist information centre with its grand conical roof – you get the chance to feast on this ocean harvest.

And Pern can’t wait for it to happen – even though the opening of his seaside outpost has coincided with the birth of Margot Bluebell – the seventh child of his own haul, aged up to 18.

“Yeah, it’s been an interesting time”, he laughs.

“When they were developing the place as a restaurant it was the obvious choice to get me as a local boy to come and do it”, says Pern.

“We’ve added the seaside to everything here – shellfish platters, traditional fish and chips, fruits de mer – there is attention to detail but it’s not taking itself too seriously.

“We have an ice-cream parlour, we have octopus door handles, we have a captain’s table in a private dining room.

“Personally I am embedded in this area, I have been since I was 14 or 15. It’s a case of giving something back now. I was born here and I’m back in my home town.

“I like to think we can offer great quality seafood that is all landed up and down the North East coast. Lobster, cod and haddock is processed by Hodgsons in Hartlepool. Langoustines and oysters are landed just a bit farther away’, he says.

Pern laughs at the obvious comparisons with Rick Stein and the celebrity of Padstow in Cornwall but it wouldn’t be a bad thing to bring a sprinkle of that to Whitby, which he maintains ‘is nicer looking than Padstow.’ 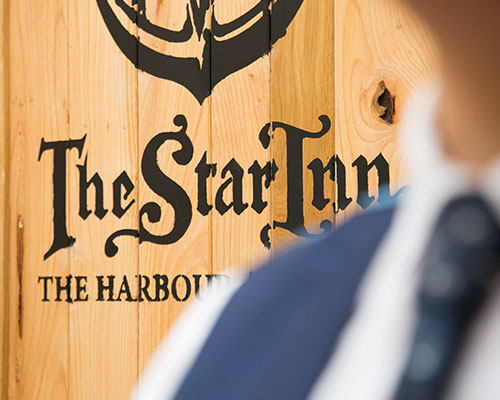 His menu certainly nods to the gourmet style hunter. As does the décor. The carpet is plaid, there is wood, there is rope and all manner of un-gimmicky maritime finery. There are quirky touches with handmade pots and witty bits of décor.

And on the menu, yes, you will find cod or haddock and chips (beef dripping of course), a woof fish finger sandwich and dressed Whitby crab salad.

But you will also find daily specials – John Dory among them when we visited – and North Sea lobster for a blow-out. Not to mention the current best-seller, halibut T-bone served with potted shrimps and samphire – at a not bad £22.

If you’re not into seafood then Pern has plundered the countryside around to offer up a Yorkshire feast of meat – from the comfort of deer and juniper cottage pie to local butcher Radford’s ribeye steak.

But let’s face it – folks will come for the Star-meets-seafood pleasures of the place and Pern’s great reputation – in a town with famous names like Trenchers and the famous Magpie – currently back as takeaway-only following a serious fire earlier this year.

Pern believes there is space for all in this seaside go-to town: “I don’t see us as competition, we are offering something different, bringing like-minded chefs and producers together – we want local support and to look after the locals.

“I was brought up going to Trenchers – I still go there, it is nice to be involved – we’re all doing a dinner for the RNLI in autumn.

“Like the Star Inn the City, we want to burst the bubble of eating something different.”

So, with your bowl of Whitby woof soup (his famous Great British Menu 2012 creation and a hot-seller), you get that little side dish of a mini club sandwich of Fortune’s Whitby crab.

But a menu classic is also one that Pern romanticises about:

“Sole Veronique is such a classic French old-school dish – I love that one!”

Fish of the day

So we ate our way through (some) of the Star’s seaside menu and the standout dish was definitely the starter called Rockpool of North Sea Shellfish.

It was pretty-as-a-picture, looking indeed like a rockpool – albeit a cleaned up-for-the-table version.

The dish it arrived in was one of the specially-commissioned pots made for the Star – a deep blue dish with little shells on the base so you felt you were foraging around in your very own rockpool of eating pleasure.

Couldn’t fault the abundance of seafood in there – hefty chunks of lovely sweet lobster, a big wallop of a juicy scallop, nicely cooked then nestling underneath were some fleshy mussels and cockles.  What made it stand out was the gently balanced sauce – a play on the old ‘cockles and vinegar’ seaside favourite. In these hands it became a perky creamy sauce with the slightest vinegar bite – a flavoured that mingled with the zesty samphire ‘seaweed’.

A great fun dish – and at £12 a come-again-for winner. I also had a monkfish ‘scampi’ ceasar salad (£19) – with hefty chunks of breaded monkfish piled on well-dressed salad leaves with bold anchovies and slithers of Botton cheese.