She's carved herself a record-breaking stand up career, had her own TV and radio series, notched up more panel shows than Countdown's Rachel Riley could calculate and has founded a smashing magazine and podcast for all the women. It was only a matter of time before Sarah Millican added an author cap to her busy hatstand. And that time is now, as she tells Sam Wonfor...

Sarah Millican’s willingness to share will come as no surprise to those familiar with her work.

Since kicking off her award-winning comedy career in 2004 by mining real life heartbreak for humour, South Shields-born Sarah has never shied away from giving her personal life a public airing on the stand up stage.

Her debut Edinburgh Fringe show, Sarah Millican’s Not Nice in 2008 focussed on the end of her first marriage and bagged her the if.comedy Award for Best Newcomer.

Ensuing sell-out tours such as Chatterbox, Thoroughly Modern Millican, Home Bird and Outsider have continued the trend – each offering a collection of funny stories delivered direct from her own, often very personal, experiences. 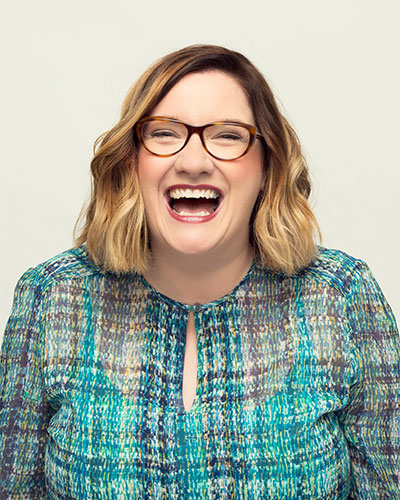 From bedroom antics and relationship quirks to hospital procedures and getting to grips with the heated poo bag realities of becoming a dog owner, Sarah’s ever-increasing audiences have loved keeping up to date with what’s been happening – and making her laugh – since they saw her last.

And they’ll doubtless be front and centre in the queue at their local book shop (or their prefered online supplier) this autumn, when the 42-year-old’s book, How to Be Champion hits the shelves.

Blending autobiography with a collection of practical self help tips and – one can safely assume – loads more gut-troubling giggles than your standard celebrity tome, the book will be released on October 5. And its author is feeling pretty pleased with herself.

“It’s worked out really well. I’m really proud of it,” says Sarah, speaking from her home, nestled in the North West countryside.

“It’s a weird thing to do – writing a book – in that, it feels proper. I don’t know why a comedy DVD doesn’t feel as proper, when it should. Maybe it’s because DVDs probably won’t be around quite soon and then I’ll be on little memory sticks or something…

There’ll also be an audiobook on offer, which will see Sarah, herself a former audiobook producer, (she spent three years doing this in between two stints at Job Centre Plus) take to the other side of the recording desk.

“I’ll be the one being shouted at to eat a banana. You always have bananas on stand by – the tiniest tummy rumble doesn’t half ruin a romantic scene.

“There were a lot more sex scenes in the books I used to produce than there is in my book, mind you. Plus, I won’t be doing any voices. Just mine.”

Having been winning at stand up and associated funniness for the best part of a decade – she was crowned Queen of Comedy at the British Comedy Awards in 2011, clocked up record-breaking DVD sales with Chatterbox Live the same year, and enjoyed Bafta-nominated success with three series of BBC2’s The Sarah Millican Television Programme – it’s fair to say 2017 wasn’t the first time publishers had come calling. So why now?

“Having some time I suppose is the main reason. I knew writing a book was a big undertaking and when fans and publishers talked about me doing one, I was always on tour or doing the TV series.

“Being 42 sounded about right.”

And while many of us may have opted to make use of the nearest foot stool and/or holiday brochure, this self-confessed work aficionado reckoned she could fit the writing of a book in. Once she’d done the maths.

“I gave myself a few months to write it. I worked out how many words I needed; how many days that would take me and then wrote that amount every day… then redrafted it and redrafted it.”

Rather than taking the chronological approach, Sarah decided to sort it by subject.

“There are chapters on divorce; body image; being bullied at school – that sort of thing.

“I decided to write a list of the things I was bullied for, because some of them were ridiculous. Like the fact that we had a microwave before anyone else,” she laughs.

“But it turned out there were a lot more than I thought. And while some of them were daft, some of them were quite hard to write about. So to combat that I wrote a list of things I liked about school, like the day I got to have a rabbit sitting on my knee for 20 minutes. Amazing.”

Although Sarah has been successfully using her life as stand up material since the off, I wondered whether putting it down on paper for people to read, rather than performing it for them in person, had required a different writing process.

“In stand up, I’ll talk about anything as long as it’s funny. I don’t really have a line. Whereas with this, I had to work out, if it’s not really funny, why is it worth including? With a book, you can go so much more in depth with things.

“There’s something about writing the words down which makes you feel like you can divulge a bit more. Like asking someone out at school by giving them a note. I felt like I could say more personal stuff.”

And now all of those well-honed words have been bound together at the printers  – together with around 40 photographs, which were begrudgingly handed over.

“I don’t really like what I look like, so I thought the best idea would be to just say, ‘we’re not having any pictures in it’. But they told me ‘no no no – you have to have pictures’. Sh**!”

So we’ll get to see perm-solution-drenched flashbacks from Sarah’s younger days at home with her mum Valerie, dad Philip and sister, Victoria, all the way through to her much less curly, but still very much bespectacled present day life, which she shares with husband and fellow stand up, Gary Delaney and their “fur babies” rescue dog Commander Tuvok and cats Chief Brody and Lieutenant Ripley.

“Oh my god there are so many pairs of glasses and perms from my childhood,” she laughs. “It’s basically like, if you’ve ever worn glasses or had a perm, this is the book for you.”

This will also be the book for you, if you fancy getting some properly practical tips from one of the UK’s most successful comedians, who remains utterly relatable to her fans, including more than two million twitter followers.

Blossoming post divorce, dealing with body image issues, the ‘excitement’ of IBS and being good at school but not good at friends are all covered. Sarah has even put her advice into easy-to-find lists at the end of the relevant chapter.

“I always try and share the things which have helped me. And I love a good list.

“So, if someone is getting divorced really quickly and hasn’t got time to read the book, they can just go straight to the tips!”

Sounds like an utterly common sense approach to time-saving self help.

And it’s not the only place this kind of impressive organisation can be observed. I refer you to the aforementioned, almost military writing plan for the book, as well as the fact that an autumn filled with promotion events – Sarah will be doing a mixture of signings and In Conversation gatherings – will enable her to also draw people’s attention to her upcoming tour.

“So if people are like, ‘I find her funny, but I can’t bear going outside’ – then they can buy the book; whereas if they hate reading, but like me, they can come and see a show. Ideally, they’ll do both.”

Which brings us nicely onto the tour, Control Enthusiast. Sarah says the show’s title isn’t a surprise to anyone who knows her.

“It does get levelled at me every now and then that I’m a control freak. But I thought, ‘why is this said like it’s a negative?’ No-one ever says ‘whoa, you’re in control’, which means the same thing.

“The thing with stand up is that you can be very controlling because everything I say, I choose to say.

“Mind you, I did also make my own magazine for women because I didn’t like any of the ones which already existed,” she laughs.

The award-winning Standard Issue Magazine (standardissuemagazine.com is where you can find all the archived articles) ran for two-and-a-half years before morphing into a weekly podcast in June this year.

“I’m so proud of what we achieved with it and the podcast is going really well. I love doing the live events too. I get to have a cracking night on stage with great women like Alison Moyet and Dawn French. It’s brilliant fun.

“Anyway,” she says, bringing us back to the tour title, “I didn’t like the word ‘freak’ so I decided to change it to ‘enthusiast’ instead… which, as my friend Hayley (Ellis, fellow comedian) pointed out, means I am now trying to control my insults as well!”

Having currently booked 11 North East dates (one at the Customs House, South Shields; two at the Gala Durham; one at Whitley Bay Playhouse; one at ARC, Stockton; and six at the Tyne Theatre in Newcastle), it’s a knocking bet there’ll be more added to the mammoth tour, which kicks off in January 2018 and runs through to December.

“Basically, we will keep adding Newcastle dates until no-one else wants to come,” she pledges. “The Tyne Theatre is certainly one of my favourite venues on the whole tour.

“You feel like you’re in a proper theatre and so to be swearing and talking about genitals feels as anarchic as I’ll ever be.”

Sara Pascoe’s Animal is incredible because I feel like it’s school, but brilliant. I’m learning but also laughing so it doesn’t feel like I’m learning anything, but I actually am.

I love Bridget Christie’s A Book For Her.

And the one I have re-read a few times is Caitlin Moran’s How To Be A Woman. It was the first time after reading something that I thought ‘Wow. A lot of this really applies to me’. I was used to reading things and picking out bits and bobs I could relate to, but I identified with so much of this, which I hadn’t read before.

How to Be Champion, published by Orion, is out on October 5.