GET TO KNOW: AIKATERINI GEGISIAN

Aikaterini Gegisian is a Research Fellow in Fine Art at Teesside University. We catch up with the Greek American artist as she launches her new artwork installation at Castlegate Shopping Centre, Stockton. 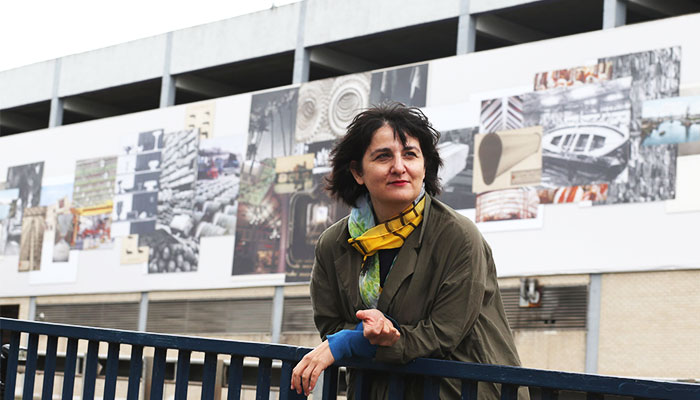 The installation of a new landmark artwork in Stockton-on-Tees, by acclaimed artist Aikaterini Gegisian, is built on Tees Valley inspiration. Commissioned by Middlesbrough Institute of Modern Art, Turn Back Tide is inspired by the evolution of Stockton’s industrial heritage and brings together reproductions of industrial products, interiors of shopping centres, decorative objects and views of ancient temples.

Can you tell us about your installation, Turn Back Tide?

I was approached by mima (Middlesbrough Institute of Modern Art) out of nowhere really – and I was quite surprised because I haven’t made a public art piece before. So as happy as I was, this was a scary moment for me. It was a huge challenge as my previous works have been on a small to medium scale and I had to think long and hard about how I could translate my skills and ideas into a large scale public artwork.

The other important thing about being selected by mima, Stockton-on-Tees Borough Council and Castlegate, was that since I arrived in the area as a Research Fellow at Teesside University, I have been working on the industrial heritage of Tees Valley, so I think that was something they wanted me to continue exploring for this public art commission.

So for me, Turn Back Tide is inspired mainly by the geographical aspects of  the river and the tide – but it also meant going back and looking at the history and the area.

Did mima, the local council and Castlegate Art discuss a brief with you ahead of the installation?

Yes. There were very specific constraints regarding the work. First of all it had to fit in this 38m x 6m frame that was already in place – so the formatting was already set in stone. But the only real direction from them was to make the connections with local history. The conversations we had were more about giving me inside insights into the local history such as what was on the sight before, how the river was used and so on. After much discussion, I found out that just across from the shopping centre was the site of Head Wrightsons Steel Foundry. So I definitely picked up ideas from the conversations we had along the way. And because of the long, rectangular format, I immediately came up with the idea of using the river and the horizon line as a way of constructing the work. 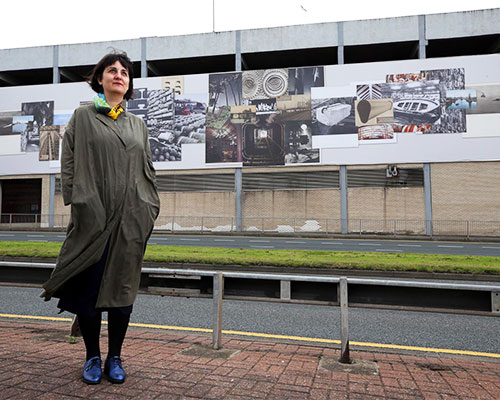 You’ve obviously spent quite a lot of time studying the area. Can you tell us about your research strategy for the project?

In June 2016 I presented my first work, which is now in a collection at mima. It’s called Memorial to the Man of Steal – it’s a sculptural photographic piece and it really looks at the industrial heritage of the area. That was part of the Teesside World Exposition of Art and Technology organised by mima – looking at the history of the steel industry on Teesside. This is when I started researching the subject for the first time, and I came across a 1920s/1930s product catalogue from the Dorman Long Factory – listing all of steel products available at the time. So that sort of became the centre of my work and I used that catalogue as an archaeological reference throughout.

So in a way, I continued the research for Turn Back Tide and went through the Teesside archives, looking through the factories in the area and the photographic material that they held. And using the archives, I identified specific publications that the factories themselves had published – then I sourced them online as material for myself to use.

What are some of your stand-out findings?

The way I work with a collage is by finding photographic evidence from the past and then I tear them apart in a way – combining the materials as I go. I found a book published in 1934 that has a foreword by Sir Hugh Bell, who was the Mayor of the area at the time. It mainly focuses on Middlesbrough but has images from the source of the Tees and the mouth of the Tees and all of the trading routes between. These images are actually used in the collage – at the beginning at the end.

I also found a book produced as a documentation of activities from the ICI factory in Billingham in the 1960s – as well as an ICI magazine. So there was a lot of research into the types of industries that were activity in Tees Valley from the twenties to the sixties. The photographs show the scale and the wonder of such industries. Postcards of Stockton’s bridges were used to connect the elements across the river.

The most important thing was that I wanted to find images that were celebratory – documenting the life of these factories and the structures and buildings surrounding. I wanted to make the connection between the buildings and the contemporary sites such as Castlegate as a shopping mall.

Your commission is quite timely, with the fairly recent closure of the SSI Steelworks in 2015. Many locals have a connection to the events in some way. Is the togetherness of the local community something that helped bring the topic to life?

Yes. I looked closely into the steelworks closure during the research for my Memorial to the Man of Steel piece. Obviously I don’t come from the area, but I’ve been interested in the loss of the industry because I’ve worked a lot in post-Soviet countries and there was a lot of loss of industry there and a lot of empty factories. I moved here just as the last factory in Redcar was closed, so I felt the loss that the local community felt – so I want this works to address the fact that there is a feeling of loss in the local community and that these buildings and factories were part of the construction of people’s identity and experience of the space. In this commission, I wanted to work in a way that gave the audience, the viewer or the passer by something they can identify with. So that’s why I used a lot of postcards from Stockton and images of the factories. I wanted to draw people in and get them to address this kind of feeling of loss and nostalgia and to bring that back to the surface again. But also looking back at history with a different perspective – it’s not just about loss, our experience of the past chances continuously and we must try and see it in a positive light.

Did you know much about the area when you moved here two years ago?

No. I have lived the majority of my adult life between London, Brighton and Bristol. I had heard of mima and I knew of Alistair Hudson, the museum’s director. I respected his ideas – so after finishing my PhD I jumped at the opportunity of a research position at Teesside University. It all happened very quickly to be honest so I didn’t get much chance to research the area – but this was a good thing because as I’m sure you know, there’s a lot of negativity in the press around Middlesbrough at Tees Valley, so I might have thought twice about the move. But because I came in with a blank canvas it has worked well – it has been very valuable experience living here and I love it now.

What can onlookers expect from the new public artwork in Stockton?

This is a public art piece, so in the way that it is placed on the back of the shopping centre and in-between the road and the river, it is not something that you go and see and spend time with. It’s kind of a fleeting-moment artwork. Something you see as you pass by, so I’ve made the work with that in mind. People might see it once, people might see it regularly on a commute to work for example, and so I wanted to have an identification with the space, so people can relate to the location and see things that were around the area in past times. There’s a real connection between the river, the trade, the route, the production of things in the factory and the shopping centre as a container of goods. It’s a link between the past and present of Stockton and as you see the work more and more, the connections become more and more obvious to the viewer.

In short, it is about presenting another point of view of this lost history. By bringing in these connections between different geographies, different culture and different places, I want to connect this area with the rest of the world, opening it up to other histories that might exist – and making a establishing the narrative that we’re all connected. So in that way, Turn Back Tide makes the loss of the industry less heavy. Something to celebrate.

And finally, your luxe local places?

Actually, I do really like The Smeltery, mima‘s new cafe – I’m a big fan and I go there a lot. I go there to work in the mornings when it’s not so busy. I also really like Bedford St Coffee – they have very nice coffee and it’s close to the university so I go there to escape sometimes if I want to have a break from the office. Great Modern Greek Food is also one of my favourite places because I sort of have a connection with it being a Greek restaurant. I was told about a Middlesbrough FC goalkeeper from the same city as me, who opened this Greek restaurant in town, so that is a nice home comfort for me – connecting my hometown and my new home in Middlesbrough.

Turn Back Tide is a bi-annual commission and is now available to view on the side of the Castlegate Shopping Centre, Stockton.