FINDING A FRIEND IN GEORGE

A trusty team player on and off the field, Boro defender George Friend is a footballing favourite, darling dad, charity hero - and new Luxe columnist. Elysia Agnew checks in…

Over a coffee at Chadwicks Inn, Maltby, George Friend reflects on a disappointing season, which has seen his team relegated to the Championship.

It’s been a tough time. If you’re fighting for your club; your adopted home. You’ve got to get the balance right when you’re a team player on and off the field. George is exactly that.

It’s more than just turning up and putting  in a good performance on a match day. It’s  a game filled with highs and lows. And it can be quite a lonely game; particularly when it means upping sticks and moving across country to bed down in a new town or city for what could be weeks, months  or years. It’s the unknown – but that’s just the way the game goes.

The industry is so fast paced; a player could sign for a club in the summer and be moving on come winter. And with loan spells too, it really is difficult to pin down an area that becomes ‘home’. But George has found his place.

“I love it on Teesside,” says George.

“For lots of reasons – obviously the football, but also our love for the area. It has kept us here for so long, and hopefully there will be many more years to come.”

“Home for us is Yarm. My daughter is three and she doesn’t know any different. She was born in North Tees Hospital – if you ask her where she’s from, she’ll say Yarm. That’s what she knows and we’re really happy about that.” 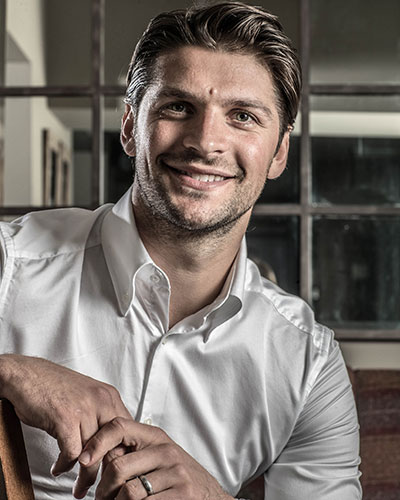 s been a climb in all respects; in terms of location and in league progression. Working his way up from the then non-league club, Exeter City – with a spell in the Midlands – and finally reaching top-flight football with Middlesbrough last season.

It’s a journey that began on a farm by the South West coast – pretty much the opposite of urban Teesside.

“I grew up on a farm in North Devon, near Barnstaple,” says George.

“I wasn’t great on the farm. I did my bit,  but I was always more into sport. I grew  up wanting to be a rugby player until I  was about 16, then I went for football  and haven’t looked back since.

“I started my football career at Exeter, then I went to Wolves, worked my way up the country and now I’m in Middlesbrough. I’m really settled here – it’s been almost five years now.

“When we made the move up here I said to my wife, ‘don’t worry, I won’t be playing in Scotland’, we’re not going to keep going North,” he laughs.

A successful career is about setting targets and achieving them.

“My first target was to play 100 games for one club. I have achieved that with Middlesbrough and now I’ve reached over 200, so now my aim is to reach 300,” he smiles.

A somewhat unusual route into the game, George started out as an aspiring rugby player.

“I think I’d get beaten up a little bit now,” he laughs.

“I haven’t turned out quite as big as a rugby player, but some people might say I’ve taken part of my rugby game into football.

“Obviously we can’t tackle in the same ways, but I do like the physicality of defending,” he explains.

George gives thanks to his agricultural upbringing for his sportsmanship. Growing up on the farm has shaped him as a
person, as a partner and as a player.

“The farm is a very creative environment,” he says.

“It’s a practical job and it taught me to try my hand at physical work as well as picking up some entrepreneurial skills from my dad.

“Weekends, of course, were always for sport. I played rugby on a Saturday and football on a Sunday.”

As exams passed and college progressed, it meant choosing between his beloved sports and a life at university. But then came the big break…

“I was signed by Exeter in 2006. I actually treated my first contract as a gap year, because I still wanted to go off to university.

The rest is history. Six years later he landed on Teesside where he has since won a PFA Player in the Community accolade, a trip to Wembley and a promotion to the Premier League. And despite their recent relegation battle, George remains positive.

“There’s always that unsettling feeling in football because you just don’t know what’s around the corner. But everything about this place has made me feel at home.”

For George, it’s the people that make him feel so welcome in the North East. Friendly faces, favourite food spots and family fun days.

“Without sounding too cheesy, I just love the people here. 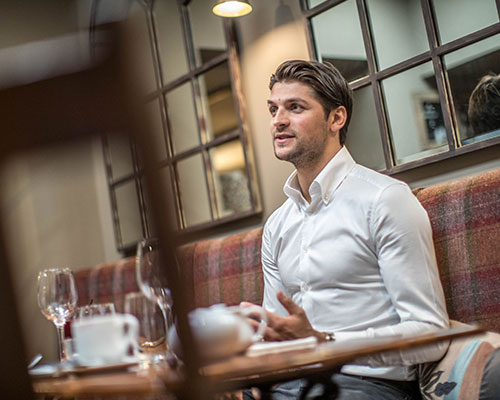 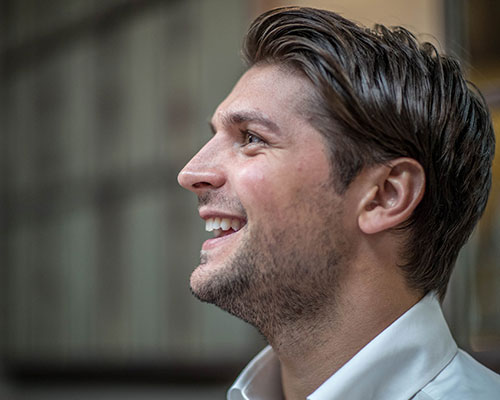 “I’ve lived in Essex, the Midlands, central London and in South Yorkshire. And I’m not trying to get the whole rivalry thing going,” he laughs.

“But for me, even the Yorkshire counties are so different when it comes to the people. North Yorkshire every time!

“We really love the area and it definitely helps when you’re in a good place of work as well.”

George, his wife Kerri and his daughter Isobel live in Yarm, where they enjoy spending quality family time away from the football field.

“Muse is probably my favourite restaurant in Yarm. We’ve got a bit of a breakfast club going there with the lads from football.

“But Kerri and I like to have a ride out of town to the likes of The Cleveland Tontine, The Crab and Lobster and The Crathorne Arms,” he adds.

We like your style, George. Perhaps you should keep a North East food diary…

“It’s funny you should say that actually,” he jokes.

“When I first signed back in 2012, Jonathan Woodgate would give me a different recommendation each weekend. I’d never heard of any of these little places before, I would never have found little gems like Osmotherley – it’s lovely – we love the Golden Lion.

“So from then on, every week I’d just be like ‘hey Woody where’s the best place for a nice Sunday roast’ and bang – he’d give me a list straight away.”

The Riverside is familiar territory for the Friends on a Saturday afternoon. But away from the football scene, they have really embraced the area as a family – whether that’s a day at the coast, a mooch around museums or an afternoon at the farm.

“Monk Park Farm down the A19 is Isobel’s favourite. Mine too,” he jokes.

“Going back to my roots!

“We spend quite a bit of time at Preston Park and we’ve exhausted most of the museums in the area – but again, they’re all good fun.

“I have to say we haven’t explored much of Northumberland. Everyone tells me how beautiful it is. So that’s next on the list.”

George is also heavily involved in local charity work. He’s a team player both on and off the field – representing not only the club, but the community too.

Teesside hit the headlines in 2015 when thousands of workers lost their jobs after the closure of the SSI Steelworks in Redcar.

A bunch of Boro players stripped down and posed for a topless charity calendar, pledging their desire to raise funds for a community project to help men over 40 get back into work.

“It was a really tough time on Teesside,” explains George.

“Obviously I’m not originally from the area, but I knew enough about it to know that it was going to affect our fans and some of the families of the local lads. So it had to be a quick idea, and it was something I’d done before at Doncaster.

“We had a lot of help from the MFC Foundation who made it all possible. And of course, the lads getting involved – I don’t think anyone feels comfortable taking their kit off in front of the cameras, but it was something we knew would work to raise money.

“I think it was the spirit of Teesside that really kept people together during that hard time,” he adds.

As a consequence of the calendar, MFC Foundation has set up a charity called Team Talk. Providing a place where people who lost their jobs can exercise, socialise and talk about how they can get back into employment.

George tells us of the many success stories that fill him with joy, but remains modest about his community efforts.

“What the guys at the MFC Foundation do is just incredible. I only do a tiny bit of that and if I get the plaudits it’s not fair because those guys work tirelessly to help.”

George continues to work closely with the MFC Foundation.

“We’re always talking about different ideas and ways in which we can raise money, but I have to say it’s not about giving myself the praise, because I do a tiny amount.

“A lot of the lads get involved too. The club is very good at that. Steve Gibson wants to maintain that local feel at the club – and we do that by getting involved in events and charities.

“There’s a family feel here, which is very important for the club and for everyone involved. It’s unique.”

Still very much at the peak of his career, with another important promotion push ahead, Boro’s number 3 is set to play a big part.

But for George, it’s important to keep looking forward for the sake of his family and his footballing future.

“But I guess the ten year plan is to play for as long as I can. I hope that can be at Middlesbrough, but we’ll see what the future holds.

“After I hang up by boots I’d like to stay in football, but in what capacity I don’t know.

“I’m doing my coaching badges now and I’ve also done a degree in journalism, so that’s something I’m interested in too.”

Quite literally writing his future. A keen writer with a journalism qualification and coaching badges under his belt, George is certainly keeping his options open.

“I did my degree through the PFA. It was a long distance course but I’ve got a full honours degree from it. I’d recommend it to anyone. I found it very beneficial.”

After a tough season, the Boro favourite remains confident that the team will pull together and go again; with the aim of winning the Championship title and returning to the Promised Land – the Premier League.

“We found it hard but we were always going to. I think we’d be very naïve to think that we would breeze our way through the Premier League.

“It’s not just the players who get relegated, it’s the staff, it’s the fans, and it’s everybody on Teesside. So we’ll do everything we can to get back. Back where we belong!”

Luxe have found a friend in George. He will be putting his journalistic skills to good use with us from September – writing a regular column with fashion-forward advice, North East must-dos and much more.

Look out for his first column in the next issue.