Luxe join the choir in an all-singing, all-dancing evening as Sister Act arrives on stage at Newcastle's Theatre Royal. 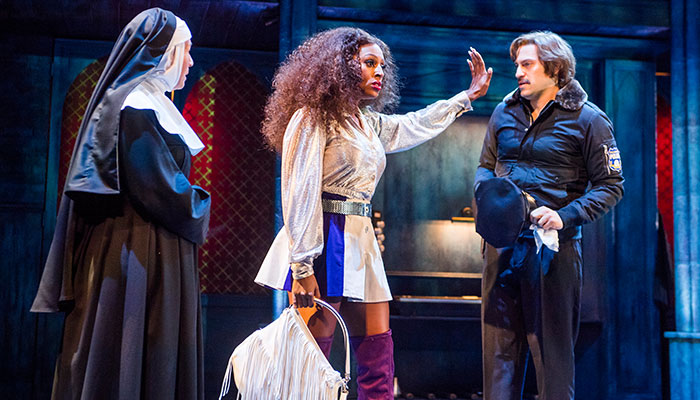 Sister Act is the hit musical (based on the blockbuster movie of the same name) directed by Craig Revel Horwood.  Nightclub singer Deloris Van Cartier is a key witness to a murder and her ex-boyfriend is threatening to kill her. Local copper ‘Sweaty Eddie’, who has a secret crush on the singer, arranges to hide her in the local convent – disguised as a nun.  The horrified Mother Superior sets her to work with the choir, whose performances are “beyond words”. 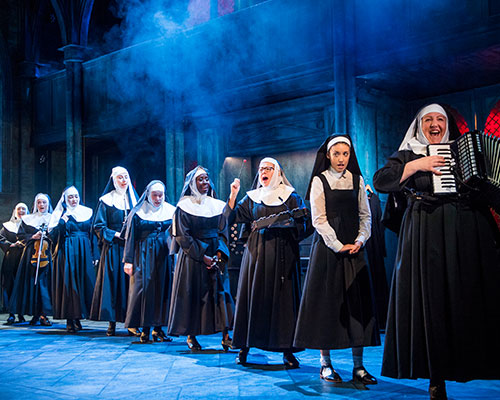 Deloris creates holy chaos before putting together a choir worthy of a papal visit. But all the attention brings danger right to the convent door, putting her and her holy sisters all at risk.  When the story, packed with catchy tunes, is all played out, the audience, from the gallery to the stalls, was up on their feet in appreciation with a minute long ovation.  They couldn’t have given a warmer Newcastle welcome to the show.

Forget Whoopi Goldberg, the fabulous feisty and funny Alexandra Burke is phenomenal as Deloris in a joyous, energetic and faultless performance.  Her rich, powerful vocals are demonstrated to their full range and she’s proved herself a truly great comic actress. 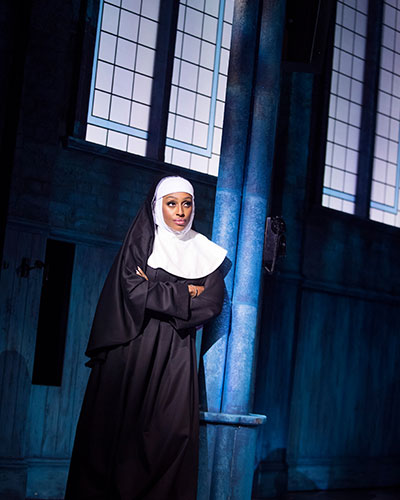 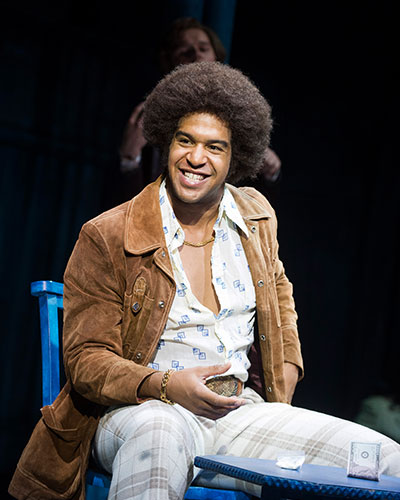 There’s an array of talent shining out from the rest of the cast, all multi-talented actor musicians.  Karen Mann is a totally believable Mother Superior – and in a poignant, funny scene where she prays for help from above with the help of a bottle of whisky was perfectly crafted.

Alice Stokoe (from Jarrow) as Sister Mary Robert, the timid postulant, demonstrates her incredible voice with a show-stopping rendition of The Life I Never Lived.

Joe Vetch as Eddie Souther is instantly loveable as the drippy cop who becomes the hero when he reveals that he has always loved Deloris and is transformed into John Travolta, while Aaron Lee playing the bad guy so convincingly you could be in Life on Mars.

And there’s lots of tomfoolery for some of the male members of the cast playing the not very bright mobsters with over-the-top prancing and deliberately awful jokes.

The cast are all actor/musicians, with instruments in hand throughout, performing a plethora of catchy tunes based on 70’s Motown, soul and funk taking you back to the world of disco and glitterballs.

Anyone who loves to boogie, wants to feel fabulous baby, and be taken to Heaven… a great feel-good show.