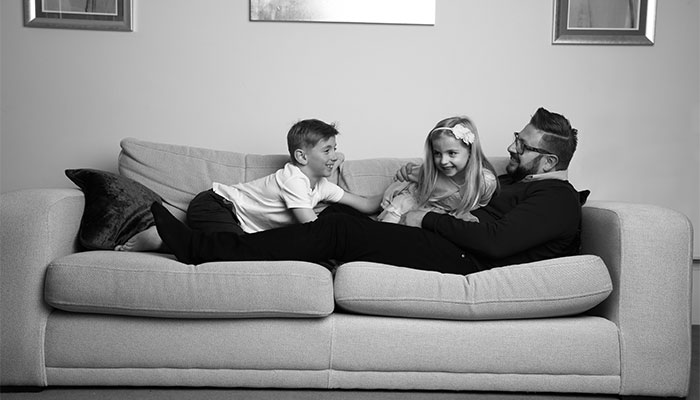 Sergio Petrucci is a big bear of a bloke. And big bears do cry. In the couple of hours we share talking about his little girl Luna, there are a lot of tears.

But for now they are happy ones. Luna and the family have been through some tough years as she went through treatment and ultimately surgery for heart problems.

Today Luna is a bright, beautiful and healthy four-year-old  and her dad is doing his bit to give back to the people who made her so.

Luna was discovered to have three holes in her heart when she was born in Sunderland.

The moments of euphoria after her arrival turned to the stuff of nightmares for Sergio and wife Emma, who also have a son Enzo.

“As time went on though, she had no symptoms and seemed to be doing fine. We were pretty positive about her health and she was getting regular checks at the Children’s Heart Unit at the Freeman Hospital in Newcastle.

“Then after one appointment we got a call to say that Luna needed surgery immediately, she was a ‘ticking timebomb’.”

This was days before Luna’s second birthday.

“We’d gone from planning holidays and going for check-ups to a state where Luna’s life was hanging the in the balance”, says Sergio, the tears coming.

“I remember watching Emma and Luna going along a corridor and the sun casting big black shadows of them as they went.”

They were all prepared for Luna’s operation but it had to be cancelled to make way for a child who was being flown to the hospital from Bristol for an urgent heart transplant.

They spent another worrying night with Luna preparing for her operation.

“I noticed the sky outside was so red, the clouds were crashing but there wasn’t a sound to be heard”, says Sergio.

Luna went down for surgery at 3pm and spent seven hours in the operating theatre with surgeon Bari Matuza. This was in March 2015.

“When she came out of theatre he was so matter of fact about the fact that he had just saved my daughter’s life.And that dad he had done a heart transplant as well – I remember he went to shake my hand and I just gave him a big hug.”

Being in the children’s heart ward was an incredible experience. Every baby has their own dedicated nurse. Te place is so calm and quiet.

Emma and Sergio stayed at Scott House close to the wards, a house where parents can stay while their children have treatment.

“It is a great facility – but you can’t take the emotion away, everyone is trying to hold it together. “

As Luna’s condition improve, Sergio and Emma saw more of the work of the unit and the facilities for families. The skies continued to be red and as she became well, the dark clouds cleared, sparking an idea in Sergio’s mind.

“I decided to do some fund-raising for the charity CHUF (Children’s Heart Unit Fund).

The Red Sky Ball was born.

“What something like this does do is make you realise that there are still children worse off than yours, other families who are going through a terrible situations. And not every child makes it.

“When Luna was in hospital there was a boy called Drew who needed a heart transplant. We weren’t allowed to know how he got on but he was always in my thoughts – he was so ill.

“We went to the CHUF toddle at Close House and we recognised Drew’s parents. They had a child in a pushchair who looked nothing like the boy we had seen in hospital – but then we knew it was him, he’d had a transplant and was doing well – that was a fantastic moment”, and the tears come…

Sergio and Emma have now organized two Red Sky Balls at the Stadium of Light. The guy’s a popular chap in his home city and people who’ve learned of Luna’s story have rallied round to help him raise money for CHUF and he Freeman, which cares for children from across the region.

The Red Sky Balls in the past two years have raised  £110,000 for CHUF, a mighty achievement for Sergio and Emma who pull it all together themselves.

They’ve had great support from the community for their efforts, from friends, colleagues, businesses and associates.

They’ve managed to buy fun stuff like one of the Great North Snowdogs – called Luna – which is a magnet for hugs in the heart unit’s play area.

“It’s not just about Luna and I don’t want it to be the Sergio Show – I am doing it because I owe the hospital. People are kind because they buy into me and the story of Luna. In turn, we make sure that not a penny of money raised is used for admin.”

“We had a daddy-daughter weekend recently when Emma was away. I took her to get her nails done and we went to see Beauty and the Beast. Then we came home and chilled out – I bought a 7ft by 7ft bed a while back so we could all get in !

*Sergio’s next event is a Dubai-style all-day Brunch at Ramside Hall September 17.