An ultimate feel-good story of love, friendship and identity, based on the songs of legendary, flare-wearing 70s squad, ABBA. Set on an idyllic Greek island, it tells the tale of bride-to-be Sophie who, days before her wedding, secretly invites three of her mother’s former lovers in the hope of finding her real father.

The laugh-a-minute reincarnation of the hit 2008 film, featuring big names Meryl Streep, Piers Brosnan, Julie Walters, Colin Firth and Amanda Seyfried, has taken the world by storm, selling out theatres across the globe, and ABBA members Benny Andersson and Bjorn Ulvaeus are still involved with the production’s journey. Up until recently, it was the highest grossing musical of all time in terms of worldwide take. 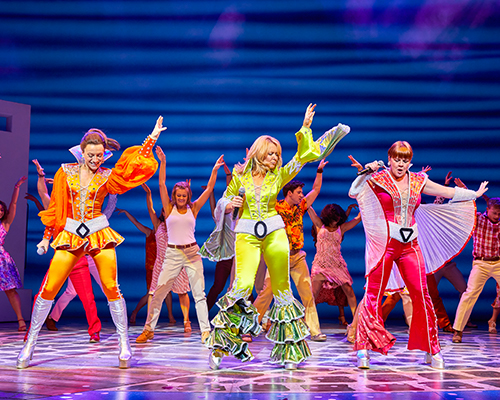 No-one we recognised, but after a thrilling show, we’d happily watch them again, again and again. Boy, did they put on a show, belting out ABBA’s timeless tunes like nobody’s business and acting with such gusto and believability, they had us all in the palms of their hands from start to finish. A cast bursting with star quality for sure.

Blonde beauties – both superb actresses and singers – Lucy May Barker and Helen Hobson step in to the roles of Sophie and Donna Sheridan, while Gillian Hardie and Emma Clifford join forces to play Donna’s hilarious best chums, larger-than-life Rosie (brought to life by Julie Walters in the film) and leggy glamazon Tanya. Alex Bourne, Jamie Hogarth and Christopher Hollins step up as dad number one, two and three – a trio that strike up an unlikely friendship, sparking plenty of laughs and banter throughout.

The fact that everyone brought the feel-good factor and it’s hysterically funny – but in a clever way. We were blown away by each and every member’s acting and professionalism; the chemistry, the fun, the laughter, between them all appeared so authentic – and not a single line fluffed.

The original storyline is preserved throughout, meaning fans of the film won’t be disappointed, and the theatre’s stellar band, lead by musical director Richard Weeden, paid homage to ABBA’s legendary work – everything from Dancing Queen and Gimme Gimme Gimme to Knowing Me Knowing You and The Winner Takes It All – brilliantly. There’s nothing quite like hearing the electric sound of Mamma Mia’s guitar intro blasting from floor to ceiling – the atmosphere was buzzing.

Usually we have a few stand-outs, but believe me when I say that they all shine bright as acting stars. Barker played Sophie oh-so well, serving up the perfect mix of sweetness, feistiness and frustration among the chaos of her on-screen mum and three potential dads. And what a voice, too. Her version of Thank You For The Music was nothing short of spectacular.

Hobson stole the show for many – and we can understand why. It takes a lot to step into the shoes of the nation’s beloved Meryl, but she really made it her own, delivering her lines – happy, sad, vulnerable – with such passion and bringing a real sense of humour and sex-appeal to the role, too, especially when joined by her fellow ‘Dynamos’.

Special mention goes out to Hardie for giving Julie Walter’s loveable character, Rosie, all she had. She had the audience in stitches from beginning to end with her sharp one-liners, laugh-out-loud version of Take A Chance On Me and hilarious rapport with Clifford’s character, Tanya. Perfect comedic timing – the pair of them.

Same to the guys, too, who each stood out during their solo moments. Bourne played Brosnan’s smouldering character, Sam, really well – a man still in love with his former flame, determined to win her back. Hogarth shone on stage as former rock-god and now London business man Harry, while Hollis played globe-trotting Bill with plenty of Aussie charm and swagger.

ABBA maniacs, fans of the film and anyone who needs uplifting.