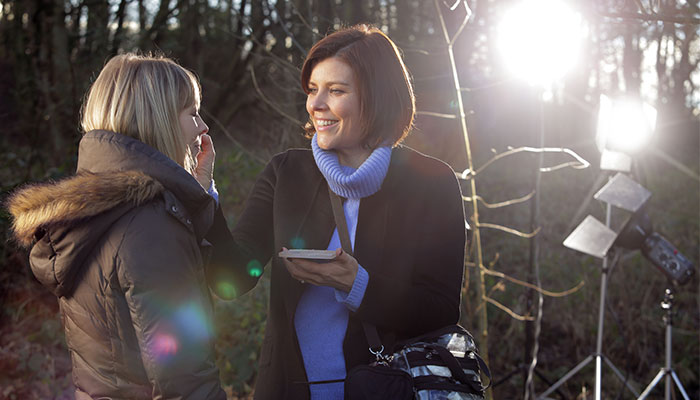 Few of us can say we’ve spent the day up to our wrists in blood and gore – and enjoyed every minute.

For makeup artist Kerry Nicholson, being asked to create a ‘dead prostitute dragged from river’ look is literally all in a day’s work. One she loves.

Welcome to the glamorous world of television. Kerry’s, more often than not, involves early starts, freezing weather, remote locations and the fear that a numb hand won’t even be able grasp a make-up brush. She has worked on location in the North East for dramas such as Vera, Beowulf and the children’s series, Wolfblood which saw her transform teen actors into wolves – teeth, eyes and painted veins.

She is a go-to when a corpse is needed on the post-mortem slab for a crime drama; “a dead body is easy – block out the lip colour and you already look dead”, she informs. By far her grittiest work has been on the series Wire in the Blood, which was made by North East-based Coastal Productions. Kerry was a trainee on set. She decided to train as a makeup artist to do something ‘more creative’ than her post-Uni job as a stockbroker in Scotland. The world of TV wasn’t unfamiliar to her, she is married to TV producer Will Nicholson who has worked on major series like Vera. They live in the Tyne Valley and have two children, Oscar, six and Darcy, four.

Wire in the Blood was a powerful drama –and the makeup team was able to create graphic, realistic ‘gore’ because of its post-watershed timing. She reveals, “You buy in fake blood which is very authentic, then mix it with mashed banana!  Pre-watershed you can’t show blood – a body might be found but they don’t show it – with Wire in the Blood it was pretty gruesome; dragging a body out of the river.”

It’s not always quite so gruesome. Kerry loved working on George Gently for example, a series set in the Sixties and filmed across the region.

“It was great because the attention to detail for the period was fascinating. Great hair and very specific makeup.”

Likewise, for the series Beowulf she would create ‘medieval, dirty sunkissed’ outdoorsy makeup.

Kerry worked on the the recent Bafta-winning film, I, Daniel Blake which was filmed in and around Newcastle. She also worked on the movie Song for Marion with Vanessa Redgrave and Terence Stamp. And when it comes to tears – she helps create happy ones for brides, making them beautiful for their big day.

“One really lovely thing was working with a bride-to-be who had plastic surgery just a few weeks before her wedding. She was bitten by a dog and wanted to be able to hide the scars. It was lovely to be able to help here – you really couldn’t tell.”

Naturally Kerry is a makeup junkie and likes nothing more than spending a few hours in the makeup halls. She will do one-to-one shopping sessions and makeup lessons with clients to help them get out of their makeup rut and try a new look. But she admits to finding the current trend for young girls to use loads of makeup ‘terrifying’.

“I am a bit terrified of the girls in the street who are so young but very made-up. I feel like saying, you’re young and lovely, you just need a bit of lipgloss! “

But she loves her creative new world, whether it’s the bride or the bloodthirsty side of it.

“I have worked on Vera – Brenda Blethyn is admirable as an actress a really lovely person, I’ve done the gritty stuff for Wire in the Blood but one of my favourite things was working on Songs of Praise in Sunderland”, she laughs.

“It was live and I was there in the background as it all happened – there was an adrenaline rush as it went live.

“There’s not that much glamour to the job – I generally spend my my life in thermals in freezing places!”

Sunday Riley Effortless Breathable Primer
This is a very sheer primer that gives a basic coverage to the skin so can be used in the spring instead of a tinted moisturiser to even out skin tone and reduce redness. It leaves your skin looking fresh and dewy but not ‘made-up’. If this isn’t enough coverage for spring it will easily blend with your tinted moisturiser or foundation to give you more coverage.

NARS Blush in Orgasm
Beautiful, peachy blusher that gives a hint of sheen and makes your cheeks have a lovely healthy glow. It works with different skin tones (ranging from light to dark). There is a lot of hype around this blusher, it’s worth the hefty price tag.
Chanel Universel De Chanel Sun Illuminator
This is a very versatile product.  It can be used on its own to contour the face or all over for a healthy glow. A little goes a long way. Apply using a synthetic brush. It is moisturising and never goes patchy.  If I was to only have one product in my bag this spring, this would be it!

Charlotte Tilbury Eyeshadow Palette in Dolce Vitta
The newest addition to my makeup collection is this gorgeous palette from Charlotte Tilbury. I love the colours and it works particularly well if you have blue or green eyes. Charlotte Tilbury has free videos on her website that gives you a step-by-step guide to getting a few different looks from one palette.

Urban Decay Eyeshadow Primer Potion
This is the secret to crease free eyeshadow. Blend lightly all over your lid then put on your eyeshadow as normal. It will give your eyeshadow more vibrancy. It will last for a full day filming, Urban Decay claim it will last 24 hours but I’ve not tested for longer than 12 hours.

LVL Lashes
This is a natural lash treatment. LVL straightens your natural eyelashes at the root, so unlike a traditional lash perm it creates the effect of longer, lifted lashes. The results are immediate, plus the added lash tint creates a mascara-type effect so you are always ready to go. A must as the weather starts to warm up and for any busy women out there. You can ditch your mascara for roughly six weeks, what’s not to love?

Wunderbrow
I was sceptical about trying is as I’m not a huge fan of the heavy HD Brows that seems to be on trend at the minute. Wunderbrow however is an easy way to fill in any gaps in your eyebrows but still leaves them looking natural. You can build to create a heavier look.

Kat Von D Lipstick
This lipstick will not budge and is described as life proof. Lovesick is a fresh beautiful spring colour that will compliment a natural day look

Liz Earle Deep Cleansing Mask
Spring is just around the corner its time to get back to a good exfoliation routine for your face and neck. Your makeup will sit so much better on the skin following exfoliation, leaving your skin clean and balanced.

Chanel Hydra Beauty Crème
A little indulgent, this moisturiser is so refreshing and light on your skin but very moisturising. After a winter in central heating your skin will feel amazing and be grateful for deep hydration it will receive from this product just in time for spring.