Jayne Secker is known to millions as Sky News' daytime presenter but in the North East she's happily known as 'Kathy Secker's daughter'. She reckons her late mum would be 'beyond proud' to see her hosting the glitzy RTS Awards in Newcastle this month, as she tells Kathryn Armstrong

Jayne Secker spends most mornings behind the presenters’ desk at Sky News. A familiar, reliable face who might at a moment’s notice be sent off to report a breaking news story such as the Charlie Hebo attacks or Nice’s Bastille Day terror.

War zones are familiar territory; she witnessed the ‘shock and awe’ bombardment of Iraq from a US warship and was inches away from death in Gaza, breaking a leg as she dived for cover after a bomb blast.

By comparison, the day we speak belongs to another life. Blissfully conflict-free. Jayne is enjoying a pre-Christmas day off, dedicated to seeing her two boys, Jake, eight and Seb, six, in their school nativity.

Always a teary one, the year’s performance has been all the more poignant for Jayne without her mum Kathy there to share it.

“The boys called her ‘Glam-ma’; she was a very glamorous, amazing grandma.”

Kathy Secker, died suddenly just before Christmas 2015 at her home in Jesmond, aged just 70. She was a well-known and much-loved television and radio presenter in the region for decades and her death caused a genuine out-pouring of grief. 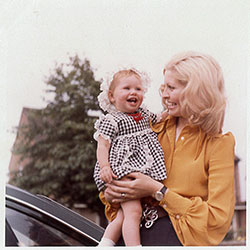 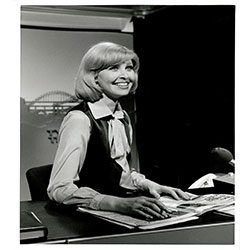 Kathy was a presenter at a time when you could count the number of TV channels on one hand, when regional television ‘was huge’ and when a voice on the radio was counted as a friend. Jayne had grown up with a mum who was a real North East celebrity, a woman who, she remembers, was mobbed like Posh and Becks are today, when she went out and about.

In the 1970s Kathy had gone from being a model – ‘the face of the North East’ – to being taken up by Tyne Tees TV as a continuity announcer then news presenter, a career path which seems incredulous today.

“Regional TV was such a huge thing in those days”, recalls Jayne.

“We couldn’t go anywhere without people standing and pointing and staring at mum. She was very much the girl next door. She grew up in Bedlington, went to the local school, was from a working class family.

“Her warmth really came through. When people called her radio request show, she was the one who answered the phone to them.”

The warmth and love felt for Kathy was obvious after her shock passing. Jayne remembers the comfort from she took from it.

“I usually rang mum on the way home from work. I called her and she didn’t pick up. My brother had had a call from one of mum’s friends to say that she hadn’t turned up for a lunch they’d arranged.

“The police came round and found her. It was desperately sad and a massive shock. I came up and when we announced her death the tributes were really moving – on radio and TV.

“She was a fixture in peoples’ lives and it was almost like they were in a state of shock too. I remember watching her on TV from being four or five and not thinking anything strange in that – it was just her job.

“But she meant so much to people – at BBC Newcastle (where Kathy was still broadcasting a request show), they wrote down all the messages people sent in or rang in, expressing how they felt, and put them in a book for us. That was so lovely.”

At Kathy’s funeral in Newcastle the region’s best-known broadcasting faces were there to pay tribute. Many of them will be there to see Jayne follow in her mum’s footsteps in February when she presents the regional Royal Television Society Awards in Newcastle.

Always a glamorous affair, Jayne remembers how much Kathy enjoyed presenting and attending the awards.

“Mum loved a bit of bling and I remember how she loved these awards. She loved dressing up and this was always a great opportunity for a night of glamour. I know she would be beyond proud that I am doing it”, says Jayne.

No doubt more than proud too of Jayne’s achievements as a journalist.

“She was always massively supportive of what we wanted to do ‘whatever you do, just try to be the best at it’, she’d say.

“Having said that, she actively discouraged me from going into the industry! I loved writing though, and went to do film and media studies at Stirling University.”

From there Jayne did work experience on newspapers and radio in the North East, becoming a BBC trainee then working in Oxford and Bristol before joining Sky in 2000.

“There was a point when I was presenting the late bulletins on HTV and mum was doing them in the North East – I remember thinking, this must be a unique thing, mother-daughter both doing it!” 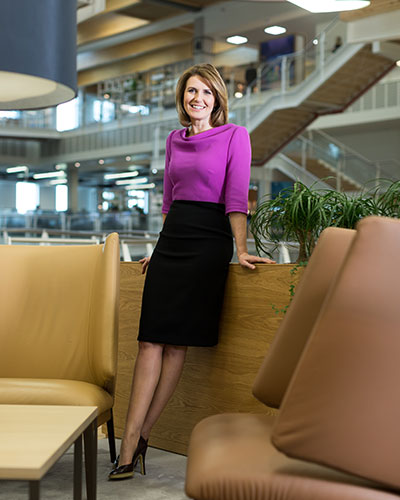 Jayne’s career at Sky saw her work as a foreign correspondent ten years, frequently in perilous war zones. She spent ten years on the road as a correspondent, reporting extensively from the Middle East, covering the Israeli / Hizbollah conflict, the withdrawal of settlers from Gaza, the Israeli election and the death of the spiritual leader of Hammas, Sheik Ahmed Yassin.

Jayne also covered the Iraq war broadcasting live from the deck of the USS Shiloh as tomahawk missiles were fired from the vessel into Baghdad the night the war began.

As a furiously driven correspondent, it is only now as a mother herself, she can imagine what her own mum went through when she was away.

“You have to go through hostile environment training before you go off – what I didn’t know was that as your employer, Sky gets in touch with your family beforehand to let them know procedures if anything bad was to happen.

“I didn’t think of the stresses my parents were under, they never let me know they were worried. From being a teenager I’d taken off back-packing and always had a sense of adventure – they were dead proud.”

She’s travelled through Vietnam and Cambodia on the trail of Gary Glitter’s young victims as well as reporting on child mortality in Liberia and illegal logging in Brazil.

In 2005 she decamped to California for five months to cover the Michael Jackson child abuse trial. By 2006 though, life on the front line was taking its toll on Jayne’s health, mentally and physically.

“I was in Gaza and there was a bomb blast right next to us, I had to run for cover and dived behind a wall, breaking my leg. I had never felt vulnerable before, never ben that close to a bomb.

“I glimpsed my own reality and it came home to me that maybe it was time for a change of direction. I wanted to settle down have kids.”

Jayne suffered from PTSD after her experiences and had counselling to deal with the trauma. After time out she returned to the presenting role on Sky’s morning news programme and the for the Week in Review show.

By no means a soft option, the rolling news programme offered Jayne the adrenaline kick she thrives on. And the ability to take a moment for her boys’ nativity.

She conducted the first interview that was broadcast live on television with Tim Peake from the International Space Station. Jayne also helped anchor Sky News’ coverage of numerous general elections and the Brexit referendum. She was live as the result was announced in Manchester and hosted a live studio debate bringing together those who voted for either leave or remain. She also anchored Sky’s coverage of Theresa May meeting the Queen and becoming Prime Minister.

“It can be a lot more nerve-wracking live in studio”, says Jayne.

“You can get an adrenaline rush as quickly as you do when you’re under fire. You have to be verbally sharp and switched-on.

“When the Bastille Day attacks happened in Nice we were reporting live from 6am for fourteen hours solid, until 8pm. It was amazing to be the first British broadcasters there – but that happens with Sky a lot.”

All of which add up to an impressive CV but Jayne remains the North East girl at heart – still chuffed to bits to be asked to follow in mum’s footsteps presenting the RTS Awards in Newcastle. And to take on Kathy’s charity role. Grace House  is the purpose-built respite centre that was founded in Sunderland by Kathy. It opened just a few months after her death and is a fine legacy to her.

“She was very much the driving force behind it – raising £5.5 million to get it up and running”, says Jayne, who attended the opening with her brother and family.

“She came up with the idea but never saw it fully opened. There’s a tree planted for her in the garden – that place, to look after children to give families a breather, really was a dream come true for mum, I am dead proud of her.

“After she died I had to think, she got to 70, had a great life, two children and grandchildren, was a super mum – she would be chuffed with that.”