TV chef, Omar Allibhoy, is bringing a taste of Spain to Newcastle in the form of a sizzling new tapas bar and restaurant...

Tapas – who doesn’t love it? We don’t know anyone who doesn’t harbour a bit of a love affair with Spain’s small plates. Chorizo nuggets, red wine hues and fruity gin, mountains of smoky paella, plump fresh seafood… it’s the stuff of dreams. Sunshine food that makes you think, long, for holidays.

And now, Spanish TV chef, Omar Allibhoy, is bringing that fiesta flavour to Newcastle. Dubbed the ‘Antonio Banderas of cooking’ by Gordon Ramsay, he’s a man on a mission to bring authentic tapas to the UK in the form of a contemporary ‘tapas bar’ concept – Tapas Revolution – inspired by the kind of atmospheric, authentic tapas bars you’ll find all over Spain, open all day and night.

“There’s a great restaurant and bar scene in Newcastle and I’m so excited to be involved in the buzz happening here and bring a little Spanish twist to the city,” says Omar. “Tapas Revolution is my version of the lively and bustling tapas bars in Madrid, Barcelona and Seville. We can’t to welcome the city’s diners and give them a true taste of Spain.”

Omar’s menu takes inspiration from his family’s recipes that he grew up with and Spain’s culinary culture of sharing, socialising and eating, offering freshly-prepared dishes cooked with the finest ingredients sourced from small artisan producers in Spain.

Open all day, the menu guides diners on a culinary adventure across Spain, from breakfast in Barcelona to dinner in Seville. Take a peek and you’ll see that it’s divided into fish, meat and vegetable sections, complemented with the best Spain has to offer in terms of charcuterie and its famous ‘jamon iberico’, hand-carved to order by a skilled maestro jamonero.

Expect all the classics, such as tortilla, croquetas de jamon, calamares, chorizo cooked in Asturian cider and freshly-made churros, too. You’ll also find ‘platos’, large tapas dishes to share including rib-eye and sirloin steak from 10-year-old cows in the Basque region of Spain, grass-fed and aged for 40 days, giving great depth of flavour.

You can sip on a selection of Spanish craft beers, including an exclusive draught craft beer from the famous Rioja region and a monthly rotating draft beer from Wylam Brewery. 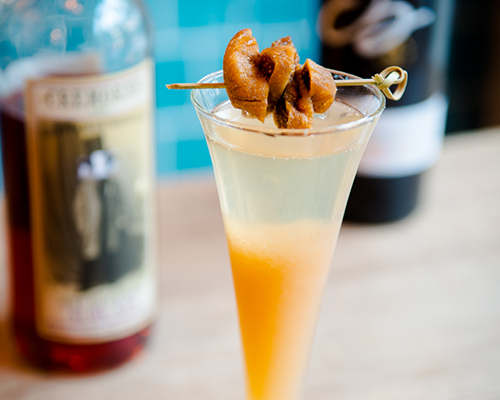 For tots and drivers, there’s a plenty of soft drinks and wine-wise, expect bottles from a number of small Spanish producers. Wine is served Catalonian style with a porrón – a traditional wine glass pitcher with a long spout that’s perfect for sharing. Glug and enjoy!

Honouring Spain’s position as the biggest consumer of G&T in Europe, Tapas Revolution also serves the only exclusively-Spanish gin menu in the country.

And for those who love their cocktails, or who just fancy stopping by for a quick drink, the bar has also collaborated with the award-winning Cocktail Trading Co to create a new cocktail menu of classics with a Spanish twist.

Omar has cooked for a host of celebrity and royal diners, including Penelope Cruz, Johnny Depp, Antonio Banderas, Tom Hanks, Bill Nighy and even Prince William. Alongside his five critically-acclaimed tapas bars, Omar has also written two cookbooks – ‘Tapas Revolution’ and ‘Spanish Made Simple’ – and made numerous TV appearances, including Saturday Kitchen, Masterchef, The One Show, Sunday Brunch and This Morning, all in aid of revolutionising the Spanish food scene in the UK.