The circus of the sun has arrived in Newcastle. Elysia Agnew enters the enchanting world of Varekai - a world where anything is possible... 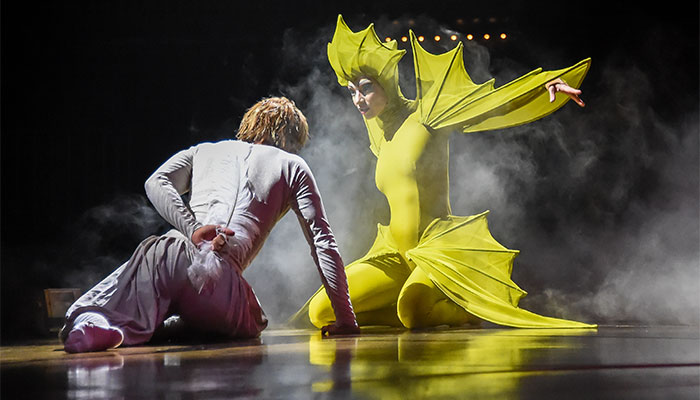 Whisked a long way from the edge of Newcastle city centre – it’s a day on the edge of time, deep within an enchanting forest. Varekai is a study of movement, exploring the mysteries and mythical happenings in an unknown world. In Romani language – the language of the universal wanderers – Varekai means “wherever” – embracing free spirits and the spontaneity of the supernatural. The show has been billed “an acrobatic tribute to the nomadic soul”, based on the Greek myth of Icarus, who flew too close to the sun and fell from the sky. Among the dazzling dance sequences and astonishing acrobatic numbers, a young, angelic-looking figure falls from the sky. Icarus enters a wonderful world of extraordinary eccentricity, backed by a story of love and life rediscovered.

And so Varekai journey begins…

What started as a group of 20 street performers in 1984, has since grown to become a major Québec-based operation providing performances to amazed spectators across the globe. With 4,000 employees and more than 1,300 artists on the books, the Cirque du Soleil shares its love of performance with talent from almost 50 countries.

Varekai features new and exclusive acts yet to be seen in the UK, making this a truly unique production. Some artists are famed for their time with the Cirque, but some are relatively unknown. ‘Unknown’ seems something of an understatement, because boy are these people talented!

Fernando Miro, (as well as being rather dishy) plays what you could call the ‘lead role’. And having been with Cirque for eight years, the Puerto Rican falls perfectly, both into the role of Icarus and from the sky in the opening scene. He’s an aerialist, a dancer and everything in between – and we’re quite simply in awe of what he can do. Sean Kempton and Emily Carragher really hold the show together, entertaining the audience from start to finish with their witty humour and clumsy clown acts.

A special mention goes to singers, The Patriarch (Jamieson Lindenburgh) and The Muse (Isabelle Corradi) – both evoking a sense of mystery and imagination in their perfectly articulated vocals. And of course, the musicians – who take a back seat behind the set. They pull the performance together, taking audiences from arena to another dimension as soon as the lights go down.

The cast are a delight to watch – each and every one of them portraying power and precision with every movement.

Varekai is directed by Dominic Champagne, who pays tribute to the nomadic soul, to the spirit and art of the circus tradition, and to those who quest with infinite passion along the path that leads to Varekai.

It’s a real spectacle, capturing the true essence of centuries of circus tradition – with an added bit of Geordie humour to make us feel at home. It’s an escape to an enchanting world where the supernatural meets circus mishaps, clowning around and acro-gymnasts. There’s a wave of ‘oohs’ and ‘aahs’ across the audience as each act is played out. The movement is so on point – so intricate that you’ll struggle to pick out the performers’ right leg from their left leg. Next level flexibility.

Stand out acts include the Sticks, the Wheel, Clown Salsa, Solo on Crutches and the Russian Swings (which will blow you away). It’s difficult to pick out just a handful though, as all acts are as captivating as the next. A wonderful bit of wit comes with the hosts (or the clowns). They’re relatable and seem to bring the production back down to earth – just when the audience feel they’ve been taken on a journey way out of this world. Our favourite, witty acts include Clown Magic and the Ne Me Quitte Pas (“do not leave me”) act, where the clown is forever following his spotlight, aimlessly ‘legging it’ around the arena to time his performance. It’s a total disaster – and it brings a bit of normality to what is an ‘out of this world’ production.

When it comes to the music, each track played out by the musicians and vocalists evoke a juxtaposition of different cultures – cultures that are not always identifiable. And again, this takes us to another realm – where the supernatural meets circus tradition.

The set jumps from the mysterious forest and the acrobatic needs of the stage, to the catwalk (high in the sky) and finally the lookout – the set’s centrepiece – a link to the outside world, and a view of what lies ahead. It’s all incredibly well thought out, and seems to effortlessly jump from act to act with no fuss or complications.

Anyone who wants to be wowed. Brilliantly bringing together everything from clown magic and trapeze, to spellbinding stick work, stunning vocals and the breath taking dance acts; this perfectly put together performance simply has it all. It’s a show that will captivate, make you laugh, and question your own flexibility (among many other things)! So round up the family or get together with friends and enter the extraordinary world of the enchanted forest. You’ll discover that anything is possible…

It’s on now – for the rest of the week until Sunday 19th. Go on, be spontaneous and head for the hidden forest!