Dobson and Parnell are responsible for shaping the look of Newcastle’s streets. They’d be delighted to see what’s turned up in one of the buildings they designed, says Kathryn Armstrong. 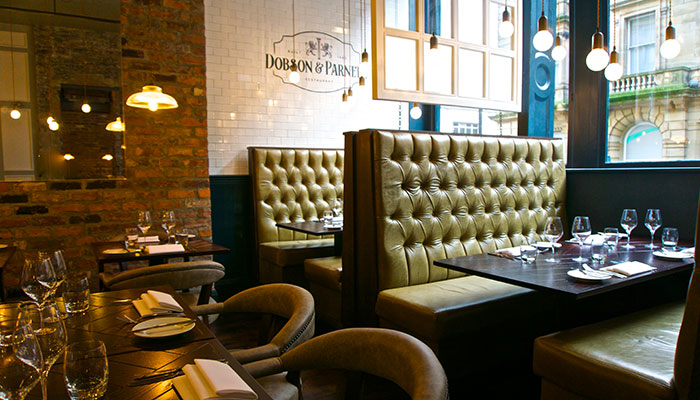 There’s something soothing and cocoon-like about the new inhabitant of 21 Queen Street in Newcastle.

The feel inside Dobson and Parnell flies in the face of the current trend for pared-back modernity. Panelled paintwork is a deep inky blue. Upholstery is rich and comforting and lighting, with a hint of  industrial-meets Victorian, offers a soft glow over the tables.

The dash of ‘now’ enters via exposed brickwork on some walls and underground-style tiling on others. It’s very nice, very solid; feels a bit like a hideaway. In fact in these days of street food and pop-ups, it feels beautifully grown up.

While the interiors are the opposite of Scandi, the food on the plate seems to nod to that Nordic fashion in cooking of from-the-earth ingredients, pickled provisions and inventive ways of paying respect to both. There’s an expectation that the food will be good. Apart from the building itself being the place that spawned Newcastle’s first Michelin star in as the eponymous 21 Queen Street with Terry Laybourne at the helm, Dobson and Parnell is headed up by another pair of North East food stalwarts.

Andy Hook, owner of Blackfriars Restaurant in Newcastle and Hinnies Restaurant in Whitley Bay, has teamed up with head chef Troy Terrington. The pair set the bar in terms of offering a menu that showcased regional produce, genuinely making much of seasonality and small suppliers, rather than just paying lip-service to the local food mood. Just like architectural stalwarts, John Dobson and William Parnell, who designed the original building in 1863, the menu has solid foundations.

Menus are re-written every day depending on freshness and seasonality. There’s been a frenzy of foraging and pickling going on – and it continues – to prepare a bespoke food larder that can add a flourish of individuality to menus. The team will be curing, smoking, salting, brining and fermenting as the seasons change.

We went to D&P early evening where the set menu is £25 for three courses.

First up was a taster of smoked cod roe with a dash of allium oil; a creamy fishy, whippy mousse with an onion-y kick from the oil and a little shard of salty crispy chicken skin to scoop it.

My starter of line-caught mackerel furthered the allium journey. The fish came as a nicely-charred fillet, strong on flavour and thus able to cope with its plate mate of charred alliums – alongside this was a little pot of the same ingredients in tiny diced form with a stock liquor – dashi – poured over. All very eventful at the table, a bit of theatre and plenty of punchy, fresh flavours and textures.

My pal had pressed wild rabbit with pickles and pumpernickel – which is lovely to say even before you’ve eaten it. On the plate it looked great and there was a lot of mouth action from the kick of the pickles and the earthiness of the pumpernickel and from the rabbit in its precise, textbook terrine.

The menu really is a joy; the calibre of dishes and attention to detail contained in them makes for something of fun-packed journey.

The fish was a beautifully cooked slab of slithering white flesh, made beautiful by its frumenty friend. This, if you’re wondering is a bed of softy, almost rubbery spelt grains, a risotto but not. Then sweet nuggets of clams, hints of lemon and a gentle stock salted by the seaweed, added another level of flavour.

My chum had slow-roasted shoulder of rare-breed pork with parsnips, trivet onions and pickled walnuts. This was an embarrassingly huge plate of food – looking every bit the roast you’d dream of.

A dense chunk of pork with some chewy caramelised bits round the edges was surrounded by sweet roasted veg – the trivet onions richly bathed in stock. Pickled walnuts were cheeky latecomers to this traditional party – sharp but a necessary and effective foil to the creamy richness of the pork.

It was tricky to move after the above, we were nicely cosied in to our comfy surroundings, drinking a bold Rueda by the glass, from a strong wine offering.

Desserts defied us but good coffee revived us. And worthy of note, when we collected our coats: they were toasty warm – thanks to the utter sanity of having a coat rack by a radiator. Little things. We think Dobson and Parnell would definitely approve of everything, from pickles to panelling.