Celebrating the launch of NE1 Restaurant Week and in association with Smooth Radio - we've picked out Fuego, Fenwick as the dine out of the day - enter below to win a meal for two this evening

Fuego is a Mediterranean-inspired wine bar and restaurant situated within the Food Hall at Fenwick, Newcastle. It is centred on a wood stone oven, a striking focal point that creates a real ambience within the dining space. The name ‘Fuego’ was inspired by this feature stone oven and many of the restaurant’s dishes will be delivered directly from it. The menu for the 70-cover restaurant has also been influenced by the Food Hall’s inherent focus on charcuterie, cheese and delicatessen as well as the popularity of its wine selection. 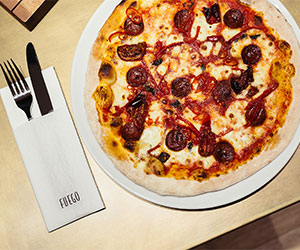 The concept and menu were created by Fenwick Executive Chef, Kelly Richardson, supported by prominent North East restauranteur, Terry Laybourne of the 21 Hospitality Group, who acted as consultant on the project.

Kelly said: “I’ve always had a passion for Mediterranean food. The Fuego menu is centred on ‘small plates’ or Mediterranean tapas, allowing customers the opportunity to enjoy a light snack or create a full meal alongside hand-stretched pizzas from our wood stone oven.”

For your chance to win a meal for two this evening at Fuego – on behalf of NE1 Restaurant Week – enter below at the Smooth Radio website: