Today (Monday 16 January) is the day the United States celebrate Martin Luther King Jr. Day. This year, Newcastle upon Tyne launches an exciting, year-long commemoration to mark the 50th anniversary of Dr King receiving an honorary degree from our very own Newcastle University.

This address was to be Dr King’s final speech outside America before his assassination in 1968. Freedom City 2017 explores the themes of what he called the three ‘urgent and great problems’ of war, poverty and racism – which remain as relevant today as they were back in 1967.

In addition to the cultural events and performances, an education and academic programme – delivered by Newcastle University – will explore the themes of Dr King’s speech and bring his legacy to life for a new generation.

Professor Richard Davies, Pro-Vice-Chancellor for Engagement and Internationalisation, Newcastle University, said: “Awarding an Honorary Degree was the highest honour that the University could bestow and came at a time when Dr King was an increasingly controversial figure. Indeed, Newcastle University was the only UK university to honour Dr King in this way during his lifetime and it remains one of the most important moments in our history.

“The 50th anniversary of his visit provides an opportunity for each of us to reflect on how we can contribute towards tackling the challenges of war, poverty and racism Dr King spoke of, and will enable a new generation to engage with his legacy.” 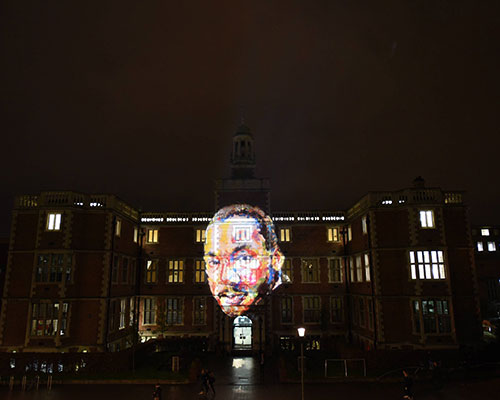 An image of Dr Martin Luther King Jr. – by artist Derek Russell – was projected onto Newcastle University’s building to mark the launch of Freedom City 2017 and to commemorate Martin Luther King Day in the US (Monday 16 January 2017).

Highlights of Freedom City 2017 include Freedom City on the Tyne, an epic, day-long series of performances commemorating historic civil rights marches from across the world.

Directed by renowned British theatre director, Tim Supple, Freedom City on the Tyne will use drama, dance, performance art and music to tell the stories of people throughout history who have united to demand political and social change.

Other highlights of the year-long cultural programme include a major new exhibition at BALTIC Centre for Contemporary Art featuring work by world-renowned artists responding to ongoing issues of civil rights internationally. Starless Midnight is co-curated by leading artist Edgar Arceneaux, who has worked extensively with Dr King’s archive, and BALTIC’s chief curator Laurence Sillars. A solo presentation of Arceneaux’s work will also be on display.

And in November, Sage Gateshead will host a celebration of the music that defined the Civil Rights movement in the 1960s and 70s.

16 JANUARY
SOLE Central
A ‘Big Question’ posed via the international SOLE network on Martin Luther King Day to schoolchildren around the world.

MARCH
Muslim youth and political participation in Scotland
Academic research project looking at how Muslim youth in Glasgow participate in politics and the political issues that are most pertinent to them.

JUNE – DECEMBER
Theatre Royal Newcastle and Bravo 22 (provisional)
Bravo 22 company is the Royal British Legion’s recovery through the arts programme, helping wounded Service personnel along with veterans and their family members on their path of recovery through theatre or art.

JULY – SEPTEMBER
South Shields Museum and Gallery
On 16 July 1977 World Heavyweight Boxing Champion, Muhammad Ali visited South Shields. This mini exhibition, celebrating 40 years since his visit, will include a set of signed boxing gloves alongside photographs and text relating to his visit.

25 SEPTEMBER
Newcastle University’s School of Arts and Cultures – Teaching Module
A cross-School, team-taught module on the theme of cultural responses to war, poverty and racism.

26 SEPTEMBER
Rhyme Scene
An evolving exhibition at Seven Stories, National Centre for Children’s Books developed with a group of young people. Rhyme Scene will develop and grow as visitors contribute to an ongoing conversation about freedom and other complex themes impacting on our world.

OCTOBER & NOVEMBER
Kalpana’s Warriors at The Athenaeum Building, Sunderland
A new installation exploring the disappearance of Kalpana Chakma who campaigned for the rights of indigenous people in the Chittagong Hill Tracts area of Bangladesh.

20 OCTOBER 2017– 21 JANUARY 2018
BALTIC Centre for Contemporary Art
A major group exhibition featuring the work of some of the most significant artists working today responding to ongoing issues of civil rights internationally.

27 & 28 OCTOBER
Platforma Festival
The fourth Platforma Festival: bringing together artists, organisations, policy makers, academics and the public to discuss and celebrate the arts by, with and about refugees and migrants.

21-28 OCTOBER
Juice – NewcastleGateshead’s festival families and under 25s
The 2017 Festival will use the theme ‘Freedom City 2017’ to commission and create a number of arts projects made by children and young people, drawing upon their ideas and creative responses to Dr King’s legacy.

OCTOBER – DECEMBER
Pittsburgh Oral Histories Project
185 oral histories of Black Pittsburgh collected by academics at Newcastle University will feature as part of the GNM:Hancock exhibition, and will also be used in research, teaching and impact.

11 NOVEMBER
‘The Mighty Stream’ – Poetry Anthology and Performances
The Mighty Stream is a collection of new and published poems from some of the best US and UK poets organised around the themes of war, poverty and racism, edited by award-winning poets Jackie Kay and Carolyn Forché and published by North East-based Bloodaxe Books.

13 NOVEMBER
Songs of Freedom
A celebration of the music that defined the Civil Rights movement in the 1960s and 70s.

DATE TBC
Freedom City on the Tyne
An epic, day-long series of performances in November commemorating historic civil rights marches from across the world. Directed by Tim Supple.