QUEEN OF THE CASTLE

Interior designer Melanie Brown doesn’t do things by halves. Her latest project to restore a Scottish castle proved to be the ultimate in antique up-scaling

In terms of interiors, it’s fair to stay ‘baronial’ is having a moment. Plummy plaids and stags’ heads have invaded hotel and show home, leading to full-scale antler overload. Seems we all want our home to be a castle.

So what happens when you’re given free-reign with a real castle? Forget faux and gaudy gimmicks, this is where a designer’s dreams really can come true.

Interior designer, Melanie Brown, owner of North East-based Design Direction is no stranger to a chunky project. She is the go-to for people who want their homes to look individual, stylish and expensive – a service delivered with much discretion along the way. 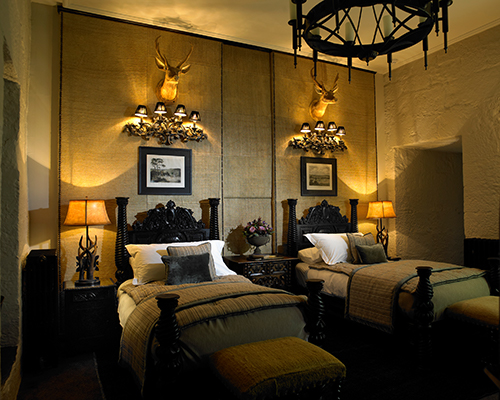 She designs for an exclusive clientele – private individuals, hotels and property developers – and has an enviable ‘little black book’ of artisans and craftspeople. She is a whizz at finding those certain ‘somethings’ that take a property from show home pristine to lusciously glamorous or urban and eclectic.

So the prospect of reviving a 14th Century castle near Edinburgh was a challenge that made her fizz with enthusiasm – and invest in some very warm clothing.

Borthwick Castle is known as the finest keep in Scotland, but when Melanie met the place it was functioning as a weary B&B, nowhere near living up to its illustrious potential. She was charged with bringing it back to life and in doing so created ten magnificent bedrooms as well as reinstating imposing yet intimate dining and drawing rooms, historic corridors, halls and staircases.

Today it is re-invented as a unique luxury destination, restored to its medieval grandeur and given five star 21st Century comfort following the 18-month interior design project.

Melanie definitely thinks of it as ‘her castle’. 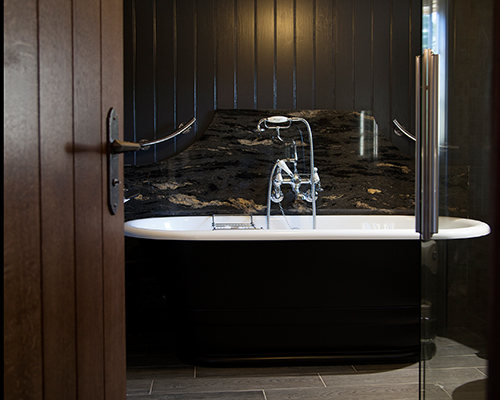 “I was named the ‘queen of the castle’ by some of the locals and it definitely feels like my castle”, she laughs. “I lived the place for months and months, even now it’s hard not to come across an antique or something and not think ‘that would work here or there in the castle’”.

“If you get involved in such a huge project then you really get to care about it. Every day was a challenge of logistics, often you’d be dealing with 75 people on site or be trying to get work done in a room when the roofers were still going up the spiral staircases!”

When it came to creating a look for the castle, fabulous basics such as the vast stone walls were there and Melanie was keen to work with those grand, authentic features.

“It was about whispering the hues of Scotland not shouting them,” she says. “The hues of soft plaid and leather, gentle animal and countryside references – and indeed a lavish, beautiful antique deer head!”

“It was antique up-scaling on a massive level. I felt it was important to show as much original unpainted stone work in as many areas as possible. I sourced the tapestries and hemp which lines the walls from many places”, she says.

Attention to detail was everything, as was the use of the ultimate fabrics and materials. Melanie was desperate to link the castle’s wonderous history to its interiors.

Her brief was to restore the castle to the historic grandeur which once attracted the likes of Mary Queen of Scots and the great Scottish poet and author Sir Walter Scott, creating a luxury destination to compete with the best in the world.

Melanie originally studied television and theatre set design at university so this project really appealed to the skills gained there. Her hands-on approach included a design for a gin bar and whisky bar in the Stateroom which was hand carved by artisans to echo the history of the castle via countryside motifs.

“I spent six months sourcing 150 Scottish regimental buttons, which were then passed to the artisan furniture makers at George Smith to include in a pair of deep-buttoned purple Mulberry velvet-covered loving seats for the State Room. That was a mission in itself,” she admits. 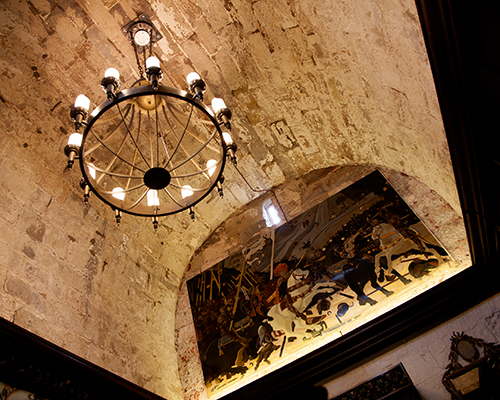 And when it came to paintwork; “I carried pieces of stone around in my handbag for many months before finding a paint maker able to mix a shade to match it,” she explains. “In the end, Dulux Paint came up with the perfect paint pallete, mixing a shade to tone with the stone, which contains numerous shades of sand and pale pink, depending on where it came from local quarries”.

The logistics of moving furniture and fittings into a 15th Century castle with only spiral staircases were extremely difficult. Furniture had to be hoisted in through a balcony window to the State Room, most of it in pieces to be re-assembled on site. The hand-carved wrought-iron chandelier in the Great Hall, for example, carved with Tudor motifs of flowers, wildlife, acorns, deer and twisted vines, arrived in 40 large boxes.  And Mary Queen of Scots’ bed was a jigsaw puzzle of 18 pieces.

That is in Melanie’s favourite room in the castle, the famous bedchamber where Mary Queen of Scots stayed several times and her last bedroom before her imprisonment.

“It is exquisitely decorated with a royal canopy and a hand-carved oak bed inspired by Mary’s bed at the Palace of Holyroodhouse in Edinburgh. The Red Room at the castle features a specially designed baronial Tudor bed carved with the tree of life and associated motifs, while the Earl of Bothwell bedchamber features a full four poster king-size bed carved from solid oak and inspired by the bed of Mary’s son, King James VI of Scotland and I of England, slept in when he was crowned King of England.”

Exhaustive historical research inspired the individual ambience of each of the bedrooms, the castle’s Great Hall, State Room, Garrison and numerous hidden passages, halls and stairwells. 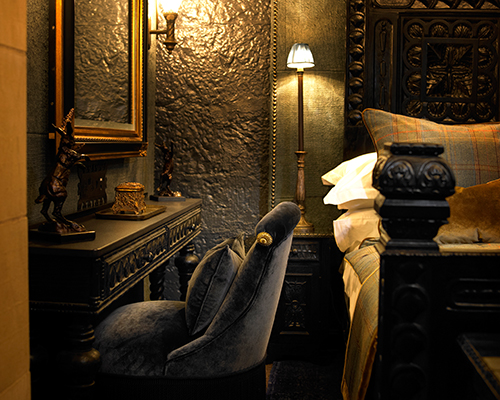 Crests from historic figures directly associated with the castle are embroidered into the Mulberry velvet-upholstered dressing table chairs in each bedroom, including the crests of Mary Queen of Scots, Lord Bothwell, and Oliver Cromwell. The colourways used throughout are inspired by popular colours in Tudor times, including ochre and bronze, lime, sage and emerald green, purple and red. In the State Room you see a hand-carved crest above the door of each bedroom, inspired by the crest of the person for which the room is named, such as Mary Queen of Scots and Lord Bothwell.

The remnants of 15th Century frescoes remain in the Great Hall, where Melanie installed hidden lighting to highlight them.

The castle has a real place in Melanie’s heart after sharing two years of her life – including some spooky nights when she stayed there alone during the restoration.

“It needed to feel right, not all polishy and new, a little mismatched here and there. I want people to feel like they are living in it – that these are the velvets that would have been there in Mary’s time, so a whole stay is like an intimate experience.”

Melanie travelled the world to source furniture, wall coverings, and artefacts in keeping with the castle’s long history, including antique hemp discovered at Maison&Objet in Paris, which was hand-dyed especially for this project. 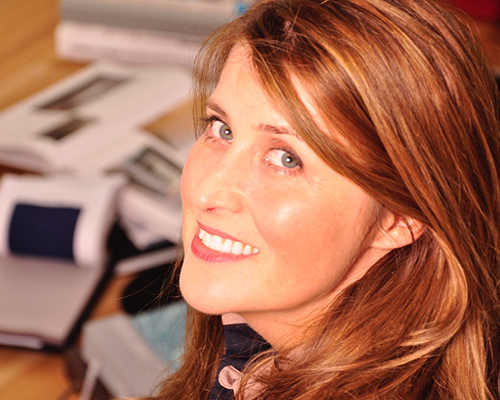 Fabrics for soft furnishings, furniture and wall coverings were been sourced in partnership with Mulberry, Sanderson
and Zoffany.

Furniture and decorative tailoring was in partnership with George Smith, whose founder, the early 19th Century furniture maker, remains a strong influence in the way the company’s craftsmen make and design its furniture with the best possible materials, hand-built using traditional methods passed down through the generations.

Many of the items were sourced in Edinburgh, including cushions by an artisan maker McKinely & Moth, occasional dining chairs from Georgian Antiques, rugs by Calzeat of Scotland and Harris Tweed on some special furniture pieces in the castle in herringbone made from 100% virgin wool spun, dyed and hand woven in the Outer Hebrides.

Beautiful faux flowers throughout from Holland were sourced and arranged by artisan florists at Secret Garden, Newcastle-upon-Tyne.

Leading North East interior designer Melanie Brown has been shortlisted in the prestigious Northern Design Awards for her landmark restoration of one of the UK’s finest historic castles.