A new season signals a host of cultural delights to add to the diary. Elysia Agnew sets the scene 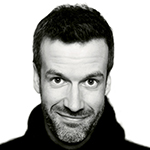 Teesside’s comedy following are in for a treat this autumn with TV and radio favourite Marcus Brigstocke confirming a date at Stockton’s ARC. Why The Long Face is an observational stand-up show with topics including politics, terrorism, the media, tax dodging and the art of being single. The comedy favourite first took to the stage in 1996 when he won the BBC New Comedian Award at the Edinburgh Festival, and has since established himself as one of the nation’s finest comedians.

Fine dining in fine surroundings this October. Durham Cathedral is the setting for An Evening with Anton Edelmann and Gerard Basset. Guests will enjoy an indulgent dining experience in the company of the legendary Anton Edelmann, Executive Chef and The Savoy Hotel’s Maitre Chef des Cuisines for over 20 years, and Gerard Basset OBE, Master of Wine and Master Sommelier. An authentic Georgian three-course dinner will be served up in the spectacular mediaeval Undercroft Restaurant. Each course will offer a range of culinary delights inspired by John Thacker’s The Art of Cookery (1758). A truly delicious evening in the company of the greatest.

It’s time to find your flares and dig out your disco shoes as The Counterfeit Seventies comes to the PLAYHOUSE for the first time. With the success of The Counterfeit Sixties, fast-forward a decade and we’ve got the new seventies show, celebrating all things glam rock. Featuring the music of T.Rex, Slade, The Bay City Rollers and many more.

Durham Book Festival returns this October with a host of household names taking over the city. There will be book-based discussions and interactive workshops to get involved with. From politics to poetry, and fashion to fiction. Some of this year’s highlights: The announcement of the Gordon Burn Prize 2016: Friday 7 October, 8pm-10.30pm, Durham Town Hall. Laura Bates: Girl up: Saturday 8 October. James Rebanks: The Shepherd’s Life: A Tale of the Lake District: Sunday 9 October. An Evening with Anthony Horowitz: Wednesday 12 October, First World War with Pat Barker and Michael Morpurgo, Durham Cathedral Nave. Songwriter in Residence: Kathryn Williams and Friends: Saturday 15 October.

Calling gin lovers of the North East – it’s time to try out more than 40 gins at the debut Gateshead Gin Festival this October. The team behind the ever-popular Gateshead Beer & Music Festival is set to take over Gateshead Rugby Club for two days of generous gin tasting. The all-new festival will see the Jam Jar Gin Company showcasing the best of the New Western style gins, while the Captain Snowball & Captain Swinborne Gin Company will serve up the best of London Dry Gins and the FiveUB Gin Company will offer the best of Sloe and Spiced gins. It’s a gin lover’s paradise here in the North East.

People of the North East are in for a tasty treat this October. Blackfriars restaurant is hosting a beer and bread weekender, where guests will be whisked away to a local brewery for an exclusive tour and tasting session, finishing with a beer-themed supper at Blackfriars. The following day, guests will take part in a bread-making session where refreshments will be available throughout the day.

Following his sixth month run as Joseph in ‘Joseph and the Technicolour Dreamcoat’, North East talent Joe McElderry heads home for a vocals show at the PLAYHOUSE.

Catch The Good, The Bad and The Ugly, an exhibition of new works by Andrew Miller at National Glass Centre. Miller explores work originating from glass found in charity shops – pieces that may have previously been the height of good taste and may hold an emotional value to the owner. This exhibition looks at how later in the life of an object, the prices are reduced and second hand trinkets tend to become less valuable.

Stratford comes to Durham as The Royal Shakespeare Company’s performance of King Lear is streamed to The Gala Theatre. Antony Sher plays one of the most epic and powerful Shakespeare characters of all. The story of a powerful man who deteriorates and is left to confront the mistakes of a life that has betrayed him. A Shakespeare favourite.

Lithuanian artist Deimantas Narkevicius presents ‘Doubled Youth’, a new 3D film looking at the removal of several socialist sculptures from a prominent site in central Vilnius. The process of erasure is documented using stereoscopic lenses in immersive 3D culminates. There will also be paper works available at the Baltic Mill, relating to the many hours of footage and a further installation.

The Last Night of the Proms returns to Newcastle City Hall after the success of the 2015 concert. Daft as a Brush, a cancer patient charity, will host this year’s event. The evening will host the 45 piece Bede Wind Orchestra and the stunning vocal chords of the principal soloist. This memorable evening will be backed with a supporting cast of choirs from all age groups. A roof-raising musical spectacular that will inspire, entertain and raise funds for the much-loved North East charity.

Out of Chaos: Art, Identity and Migration is a brand new display opening at the Laing Art Gallery this October. Addressing the issues of identity and belonging, this exhibition will showcase the works of Frank Auerbach, Marc Chagall and David Bomberg. Exploring themes of immigration, creativity and citizenship, telling the unique stories of people who have experienced social and political upheaval first hand.

Frozen, is without doubt, the fastest selling Disney On Ice show in the history of the Metro Radio Arena. This is the first time that audiences in the UK will see the entire Frozen story showcased by Disney On Ice – and two extra shows have been added. The ice-rink is surely the perfect venue for this much-loved performance which sees Mickey Mouse and Minnie Mouse take the audience through the magical story based in Arendelle, with special appearances by beloved Disney princesses and favorite characters from Disney/Pixar’s Toy Story and Finding Nemo and Disney’s The Lion King, who come together to prove that true love is the greatest power of all. Frozen transports audiences to a wintry and spellbinding world.

For a chance to win tickets | luxe-magazine.co.uk/win/