His need for speed

Graeme and Wendy Lowdon may have their wheels on some pretty glamorous tracks, but their feet remain firmly on the ground, as Peter Jackson reports 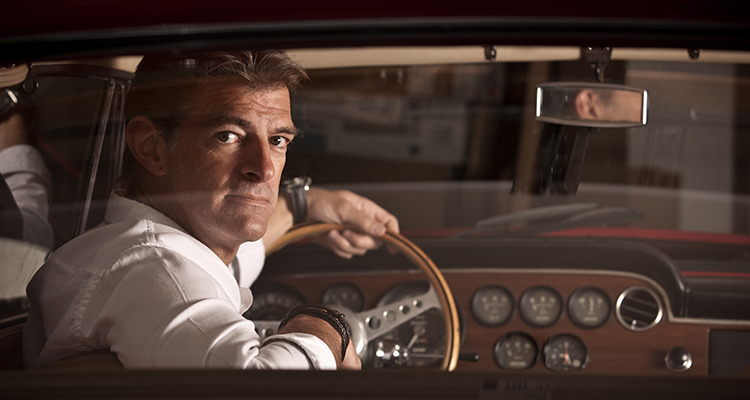 Graeme and Wendy Lowdon come across as a perfectly normal middle class couple. They are both native North Easterners, live in a charming house in Corbridge, and have two lovely children. Yes, they seem prosperous and successful, but not unlike thousands of others.

They are not what one would instinctively associate with the higher echelons of the glamorous world of international motor racing: that sport of the mega rich, of celebrities – of what would once have  been called the ‘jet-set’.

And yet Graeme, always supported by Wendy, has been chief executive of a successful Formula Renault racing team, which became a Formula 1 team – whose drivers have included Lewis Hamilton, Kimi Raikkonen, Paul di Resta and Robert Kubica – and has now jointly founded a sports car racing team to compete in the World Endurance Championship. 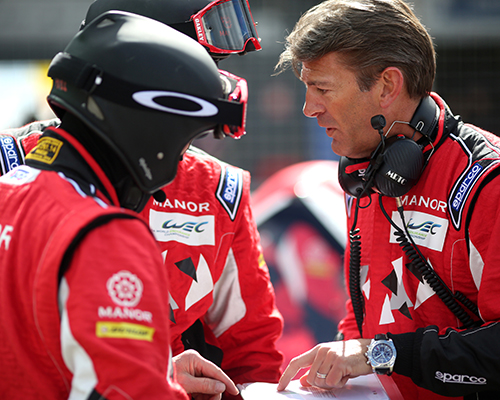 But they remain – and I have known them for 20 years – modest, warm-hearted and utterly unassuming. Perhaps because their road to success has not always been smooth.

Graeme studied at Prudhoe High School and read engineering at Sheffield University before going to work for NEI Parsons, which was then acquired by Rolls Royce Industrial Power Group which sent Graeme to Newcastle University to do an MBA.

“That gave me some exposure to the wider business world but I’ve always considered myself fundamentally to be an engineer at heart,” he says.

He had always had a great interest in motorsport and, when, in the mid 1990s, the company he was working for, ABB, started to sponsor a racing team he was delighted to get heavily involved in the programme.

“It was a perfect opportunity to see how a professional motor racing team worked from the inside,” he says. “I was really fascinated by it and decided that that was something that I wanted to get involved with.”

So, in 1996, he and Wendy – they were married by then – left Switzerland where they were living and working, returned to the North East and set up a Formula Renault racing team, Eiger Racing.

“I look back now and I still can’t believe we managed to do it,” he recalls. But, if that wasn’t enough, on the same day, he set up a new IT business, called Just Two Clicks, later J2C. This grew rapidly during the dot.com boom and floated on the stock market.

“Our business was in the right place at the right time,” says Graeme. “But it also got caught up with everything that goes with that boom and it was a very turbulent time and it required a huge amount of attention.” 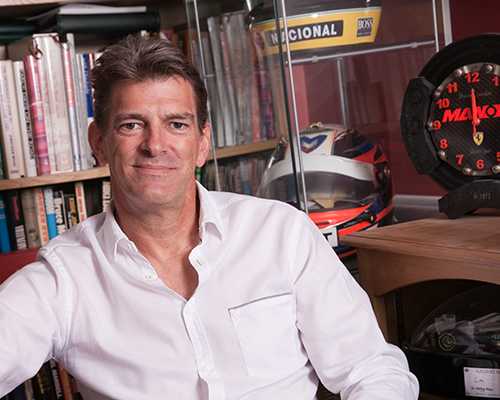 In order to be able to devote more time to J2C, in 2000 Graeme joined rival Formula Renault team, Manor Racing, which then had a young unknown driver called Kimi Raikkonen.

“Over the next few years we had some very good times with some very successful drivers who would go on to become very big names in motor racing, the most obvious being Lewis Hamilton who raced with us for three years,” he says.
With its talented young drivers, Manor went on to win plenty of races and a lot of championships and by the mid 2000s the team was running almost exclusively in European Formula 3.

If that wasn’t enough, Graeme co-founded a new business, Nomad Digital, which pioneered a way of delivering internet wifi signals to the transport sector, particularly trains.

They wanted to develop Manor further and in 2009, the FIA, the world governing body of motor sport, announced some regulation changes to encourage independent teams, such as Manor, into Formula 1.
Manor submitted an entry, along with 30 other teams, and was one of three successful applicants.

“It was a great achievement but it was very daunting as we had seven months to build a complete Formula 1 team and be on the grid for our first ever race in 2010 in Bahrain,” Graeme says. “That was an incredibly intense period, but we had the benefit of very high profile support from the Virgin Group. We learnt a huge amount. Sir Richard Branson was fully involved and came to a lot of races.

“What we were doing was an enormous challenge in sporting terms and in business terms. There’s a massive difference between a junior formula and Formula 1, and Sir Richard Branson had built very much a challenger brand in the Virgin Group and that’s what this endeavour was really all about.”

They entered the first year of Formula 1 as Virgin Racing, with Graeme as chief executive. By this time, Nomad Digital had grown and matured, with big contracts for rail projects all over the world. It was ready for its next stage of growth and Graeme was having to devote more time to Virgin Racing, so, in 2010, he gave up his executive role in the company to concentrate on Formula 1.

“The timing worked well for all involved and I was able to take a backseat in Nomad and eventually I exited altogether,” he explains.

A fresh challenge soon arose when the rules for Formula 1 changed and a promised budget cap never materialised. As Graeme puts it: “The goalposts didn’t just move around on the pitch, they moved to a different continent.”

This meant that the commercial environment that had been promised to encourage new entrants into Formula 1 was largely stillborn. Graeme and his associates were faced with a choice of adapting to this more challenging environment or giving up on Formula 1.

“One of the things I’m really proud of is that we stuck at it and, of the three teams that were awarded entry into Formula 1 in 2009, the team that we entered is the only one of those that’s still there and competing,” says Graeme.

By early 2014 everything was looking promising with the team running well, a good car and a talented driver line-up, including Frenchman Jules Bianchi. In Graeme’s words: “There was a  real spring in everybody’s step.”

Racing is something that, if you’re passionate about it, you want to do at the highest levels

But commercial pressures mounted and the rate of development slowed as more time had to be devoted to navigating choppy financial waters. Then tragedy struck. The emotion is still plain in Graeme’s voice as he explains what happened.

“The worst possible thing that can happen in a race team happened and one of our drivers suffered a very serious accident in Suzuka, at the Japanese Grand Prix. Jules had, what would normally be a not unusual accident in that, in very poor weather conditions, he left the track but, instead of hitting the safety barrier, he made contact with a vehicle that was recovering another car and suffered very severe injuries. Nine months later, very sadly, he lost his fight for life.”

So, by the end of 2014, the team was in crisis and the directors took the decision to put the company into administration. With a lot of hard work and against the odds they found a buyer. “I look back now and I still can’t believe we did it, but we found a new investor and handed the team over to a new owner,” says Graeme.

He stayed with the team until the end of the 2015 Formula 1 season, “but, as soon as the flag dropped in Abu Dhabi, I started looking to see what to do next in motor racing”.

In the end, he and his partner in Manor Motor Sport, John Booth, opted for sports car racing and the FIA World Endurance Championship, centred on the iconic 24 hours of Le Mans. The championship covers tracks from Silverstone to Fuji in Japan, from Mexico City to Austin, Texas, and from Bahrain to Shanghai.

There are four classes of car in each race, split into GT cars, such as can be seen on the roads and the more space-age prototype cars. The prototype division is divided into LMP1, which are designed, built and raced by manufacturers, such as Audi or Porsche, and LMP2, which is exclusively for teams racing cars built by others. 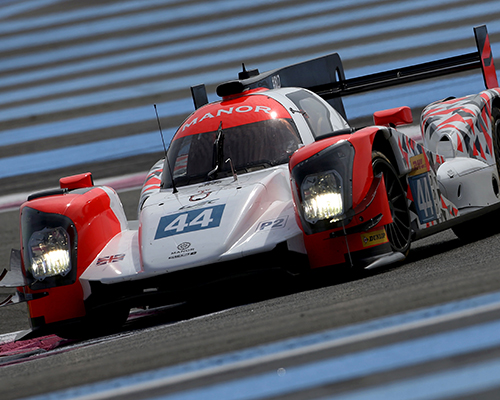 Manor is racing two LMP2 ORECA with Nissan engines. The drivers and several of the team worked with Manor in Formula 1. “Everyone races on the same track on the same time and there are enormous speed differentials, so it leads to some spectacular racing and a huge amount of overtaking and each race lasts for six hours, apart from the 24 hours of Le Mans,” Graeme explains.

The first race was at Silverstone and the second at Spa, Belgium, where Manor finished third – but with mixed feelings as they had been running first and second. So, why do he and Wendy do it? Why not settle down to a quiet life in Corbridge?

“Racing is something that, if you’re passionate about it – which we are – then you want to do it at the highest possible levels and there is no higher level in sports car racing than the FIA World Endurance Championship,” he says.

“Similarly in single seaters, Formula 1 is the highest level and we’ve maintained all our relationships in Formula 1 and are still very close to what’s happening.

“If you’re passionate about racing, there’s a reward from operating at the very highest level, it’s where you test yourself and where you get our fulfilment.” And is it as glamorous as people imagine?

“Yes, it is!” He laughs. “It definitely is, you travel the world to some fantastic places, to venues that are, by definition, glamorous. But nobody should ever mistake that for an industry that’s easy. Racing is incredibly hard, the highs are very high and the lows are desperately hard and not something that you’d wish on anybody. We’ve experienced both in the best part of 20 years.”

May they have at least another 20 years of highs.