We get to know Teesside Tornado, Richard Kilty, a little better as he takes to Rio as part of Team GB

Bullet-fast, Richard shook his sport at the start of 2014 when, after missing out on the Olympics and almost quitting the track, he came back and broke a world sprint record for the 60m at the World Indoor Championships in Poland. It brought him after-party glory and home-town hero status in Stockton with a welcome-home bash at Yarm’s Lotus Lounge. Not only that, but much-needed cash reward and opportunities he could once only dream of.

His story is an astonishing and humbling one. He is driven and incredibly articulate about his struggle and is only now beginning to take in the enormity of his new-found status as a sporting superstar.

“I’ve suddenly found people want me – I am on billboards and I am Elton John’s VIP guest – it’s crazy. It is amazing how my life has changed. “I have always had the dream – to be the one who won gold. It has always been there in my mind. You have to have the dream, not everyone is going to be a world champion, but I was blessed with fast legs and used them to shock the world.

“I had something to prove and I proved it – at the World Championships the fastest runners in the world were looking at me and asking ‘who’s the white guy who can run?’ “I could not believe that my life had changed forever in 6.49 seconds.” 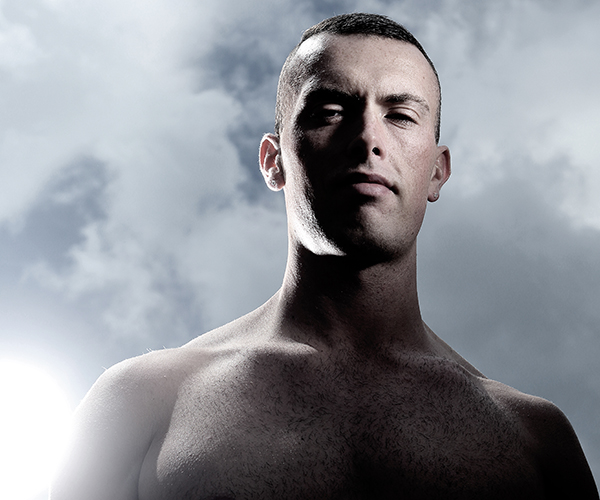 Those magical moments marked an extreme turnaround in fortunes for a boy who spent some of his childhood in a hostel for the homeless, nearly going into foster care and who was on the breadline after missing out on selection for the 2012 Olympics.

“When I was at school I was fast and won on sports day, but I went to a new school at seven or eight and was really scared at my first sports day. My legs were like jelly at the start of the race and my heart was thumping. I won and I remember the teacher – Mrs Edmondson at Pentland Primary in Billingham – saying she had never seen a kid run like that at sports day – she took me under her wing and took me to county and schools sports days at Clairville Stadium.”

“I remember the adrenaline of those days even from being so young – even now I can still remember the smell of lunch and the feeling of nerves on the days we were going to the county sports – we’d have lunch early in the hall, going to that stadium was what I lived for.”

As a teenager he continued his training – it was an escape from a tough life. “I lived in a hostel for a time – there were four of us in one bedroom – it was a dirty, smelly place. As a kid it was embarrassing to be poor and I didn’t tell my friends where I lived. But inside of me there was always this vision of one day going out there and being ‘the one’”.

The turning point for Richard’s ambition came watching the Sydney Olympics when he was a teenager. He put everything into training and competing, making the most of those God-given fast legs. By the time the 2012 Olympics came round he was a contender. He was training with Linford Christie, had run 10.23 for the 100m and was sure he could qualify for the Olympics.

Then, six weeks before the trials, he tore his hamstring and saw his sponsors – and any hope of making the Games – disappear.

“I should have been selected – my times were right, I had had an injury but I was ready. Controversially I wasn’t selected – I still do not know why. I lost funding and for five months just quit completely. I’d gone to university to study sports sciences at Loughborough, but I dropped out because the student lifestyle just did not work with an athlete’s training.”

“I couldn’t pay my rent and slept on Dad’s sofa. I had worked so hard with running and training but after not getting selected I thought I was fighting a losing battle. I even went to join up for the Army.”

One day a run by the waters at Tees Barrage brought him a jolt of clarity. “It just hit me – I have been blessed with this talent and have had one unlucky year – if I quit, then it has been a waste of ten years.”

Richard couldn’t afford to move to London to train so he decided to take matters into his own hands. “I have the talent, the legs and the surroundings – I ran up hills, on the dunes at South Gare and along cycle paths – real hard, old-school training. I teamed up with another athlete, Chris Tomlinson, who does long jump, and we’d push cars around Teesside Park to get our strength up. During those eight months I ran 10.1 seconds for the 100m and my indoor running was really quick. I qualified for championships in Moscow, which meant I earned some money and could do more training.”

The course was then set for the World Indoor Championships in Poland.

“This was my opportunity to change myself and to prove everyone wrong. I ran a personal best of 6.53 for the 60m against class opposition and there was the feeling of ‘who is this white kid who has come from nowhere?’ I wasn’t heard of on the world stage at all – that meant by the time the final came there was no pressure on me.”

Richard paints the picture of the build-up to that final in the most minute detail – the race may have lasted just six seconds but he can talk about the memory of it for much longer.

“For that final the pressure was off because just being in the final had made me a hero – but I knew I was ready. My mind was empty – the others will try and psyche you out, they might chant, stare, shout at themselves. You hear the commentator say ‘here’s the big one, the one you’ve been waiting for’ and we go on to the track. The roar is incredible and you feel your heart will burst. Twenty thousand people were chanting my name. The gun goes and you just react without thinking – you have the others in your peripheral vision and you know you are ahead.”

When he ran that world-beating race, six athletes were separated by just 0.04 seconds. Richard’s chest shaved the line first and he responded with a Tarzan-like chest-beat of triumph. Life had changed in 33 strides and 6.49 seconds.

“I thought, ‘this is the moment I’ve shocked the world!’. I clutched my head and only when I saw the board did it really hit me. I was the first white guy since Allan Wells in 1980 to be so successful in sprint.”

And then life changed completely.

Since then, the North East’s sprint king has gone on to enjoy a wealth of success both on and off the track, looking to events like BBC Sports Personality and the invitations that come every day. He loves it but never takes any of it for granted.

“Now I fly first class, stay in great places and have the money to do anything – before I was a raw kid who was hungry for fame and now the others are running. When people try to get into my head on the start line I just laugh and I think, ‘you can’t break me.’ I’ve seen things and had to do things that other people haven’t.”