Have a fancy fiesta at Wynyard Hall this summer. Throughout July and August, tapas will be served on The Terrace, where guests can while away a sunny afternoon with a chilled glass of wine and some tasty Spanish dishes. And with stunning views across the lake, the Spanish sunshine comes to the North East this summer.

Jackie Magazine is back, hitting the shelves of Sunderland this summer. A growing up reference point for more than a few Luxe readers we suspect? Jackie the Musical recalls the days when there were no mobiles phones, no apps, no texting and no emails; a world where teenage girls waited beneath the letterbox for their weekly issue of Jackie Magazine. A funny and feisty musical with a soundtrack including the era’s best-loved hits including chart-toppers by David Cassidy and Donny Osmond.

During the Second World War, The Band of the Royal Air Force College performed in London, marching through recently bombed areas. They went on to play at the coronation of our present queen and during the 1960s the band gradually performed an increasing number of engagements. The Band of the Royal Air Force College still perform up and down the country, with all of their proceeds going to charities such as RAFA – the RAF benevolent fund. The band will be playing at the Princess Alexandra Auditorium in Yarm this July, with a truly inspirational and enlightening concert for the North East.

The Incident arrives at the Richmond’s Georgian Theatre Royal ahead of its West End run this July. The production will take you on a journey of young singing, acting and dancing talents all the way from China and Hong Kong. In  post-war Britain, two gangs of school kids put aside their differences to join forces to overcome their troubles, learning about life along the way. This is a gripping and passionate musical full of comedy, delightful scenes, dazzling dance routines and an incredible score.

Live some Top Gear life as the NE1 Newcastle Motor Show, returns for its second show-stopping year. For two days Newcastle city centre will be home to what is believed to be the largest city centre open air, free motor show festival in the UK. The city will be taken over by more than 150 vehicles from the world’s most exclusive, unique and classic cars to showstoppers from leading dealerships including Aston Martin, Bentley, BMW and Jaguar who promise to polish up the best from their showrooms. Car buffs will be in their element and there will be lots to see and do for all the family and it’s all free to attend. Last year’s event attracted over 100,000 visitors – this year, with more cars and more to see and do, organisers NE1 are expecting record crowds. A heady mix of Newcastle’s famous architectural sites providing a backdrop for some of the world’s most beautiful cars is every motoring enthusiast’s dream come true.

X marks the spot at South Tyneside Festival this summer as a host of X Factor stars grace the stage. Alexandra Burke, Reggie ’n’ Bollie and Ben Haenow will all perform live at Bents Park in a special outdoor gig. Their performances will be the first in a whole series of Sunday Concerts taking place as part of the South Shields based festival throughout July. The trio of X Factor favourites will be joined by several other entertainers throughout the event.

This year’s Tyneside Festival is going for gold with an 80s star heading up the festival on Sunday 24 July. Tony Hadley, the Spandau Ballet frontman will perform for a North East audience at Bents Park. The singer has released five solo albums since 1990 and has been entertaining audiences across the world for more than 25 years. The crowd can look forward to hits including Gold, Only When You Leave, True and Through The Barricades.

As part of this year’s Tyneside Festival, reggae pioneers UB40 will be performing for audiences of the North East. One of Britain’s best-selling bands, UB40 have enjoyed international success for over 30 years. This performance will round-up a series of four Sunday concerts, with other headliners including The Proclaimers, Tony Hadley and X Factor stars. UB40, featuring original band members, Robin Campbell, Earl Falconer, Norman Hassan, Brian Travers and Jimmy Brown, have sold more than 100 million records and have achieved several Top 40 singles. Hits will include, Red Red Wine, (I Can’t Help) Falling In Love With You and Cherry Oh Baby.

With a mix of music and film, Asunder marks one of the region’s major commemorations of the WW1 centenary. Accompanied by contemporary music, the dramatic film brings together the stories and images of the past. Because of its shipyards and munition factories, the North East was in the front line. Asunder is a portrayal of what life was really like on the home front, told by the people of Tyneside and Wearside. The film, using archive and newly filmed footage is backed by a soundtrack from the world famous Royal Northern Sinfonia, Field Music and electronic duo Warm Digits. A unique and truly inspiration piece of film and a must-see at the Sunderland Empire as we approach the centenary of the First World War.

Strawberry cream tea and Pimms on the terrace is a good way to while away an afternoon at Wynyard Hall. Guests can enjoy a glass of Pimms on arrival, followed by two freshly baked fruit scones, strawberry preserve & clotted cream served with a pot of freshly brewed tea. £15.50 per person. Available from 12pm – 4.30pm, throughout the summer.

Acclaimed paintings by Stockton born Colonel Gilbert Ormerod Spence highlighting ‘the human side of war ‘ are exhibited at Preston Park Museum until October. Spence: The Art of War, explores the remarkable story of the Commander of the 5th Durham Light Infantry (DLI), through a collection of his wartime watercolours painted at the frontline. Born in Stockton-On-Tees in 1879, Spence took command of the DLI in 1910. He went on to fight during the First World War and was wounded in 1918. Paintings of barren landscapes and blitzed towns are hung alongside soldiers at rest on the DLI’s journey through Northern France and Belgium. Having survived the First World War, Spence was tragically killed in a car accident in 1925 at the age of 47. Spence – The Art of War coincides with the anniversary of the Battle of the Somme in which Spence and the 5th DLI took part. 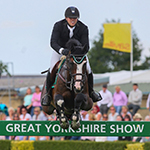 Celebrating the best of British farming, The Great Yorkshire Show returns. England’s premier agricultural show is held in Harrogate and exhibits the very latest in the industry. This year’s highlight is the exciting ring display, Bolddog Lings Motorcycle Display Team, with over 1,200 stands offering everything from country clothing to combine harvesters. The competitive classes have everything from prize-winning bulls to poultry and international show jumpers. Enjoy regional food stalls and a gift hall.

After 65 years, the Horrible Histories author Terry Deary returns to the Sunderland Empire with two brand new stage shows: Incredible Invaders and Groovy Greeks. The shows will bring back the ruthless Romans, the vicious Vikings and the savage Saxons. Incredible Invaders follows the story of crazy Caratacus. But can he save the nation? From savage Sparta to angry Athens, Groovy Greeks unveils the truth about growing up in Greece and competing in the first ever Olympic games.