with Terry Laybourne of 21 Hospitality Group

You can’t beat seafood cooked outdoors so forget the meat, fire up the barbie and impress your family and friends with Saltwater Fish Company’s healthy recommendations for the BBQ this summer.

When the sun is shining thoughts naturally turn to cooking and eating al fresco because let’s be honest, who doesn’t love a barbecue? As evocative of an English summer as strawberries and cream but all too often us Brits favour meat over fish on the coals. Steamed, grilled or pan-fried, fish is always a delight but introduce it to fire and the outcome is truly magnificent – it’s time we made more room for it on the barbie. 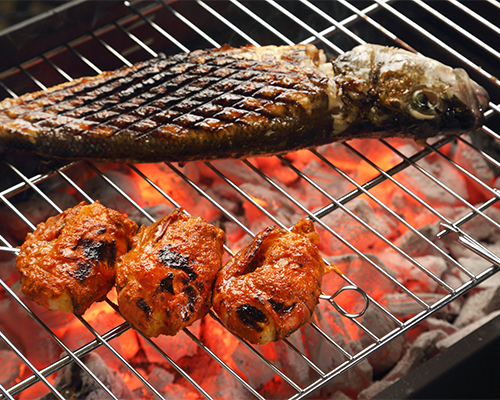 Whether you’re barbequing during the week or at the weekend these two recipes are simple, light and sure to satisfy.

Something for a school night – king prawns are made for the barbecue – easy to marinate, which gives them an extra kick of flavour, and quick to cook. If you’re barbecuing mid-week, king prawns with Indian spices are just the ticket – lovely served with warm naan bread and a salad of sliced tomatoes, red onion, cumin and fresh coriander.

Something for the weekend? Whole grilled fish is a summer favourite in the Mediterranean – the skin protects the flesh of the fish whilst the bones help to add flavour and moisture. If you’re planning a barbecue for two or are entertaining at the weekend, whole
sea bass with fennel, black olives and oregano served with salsa verde is a
real joy.

Rinse the fish, pat dry and then remove the fins from the fish with kitchen scissors. Trim the fennel bulb, cutting out most of the core but retaining the leafy fronds. Shave the fennel into very thin slices using a mandolin and then transfer to a bowl with the thyme, oregano, olives and fennel fronds – season with salt and pepper. Stuff the fish generously with the fennel mixture and secure the cavity with a cocktail stick. Preheat the BBQ and oil the bars.

Brush the fish with olive oil and place on the hottest part of the grill. Cook without attempting to move for 4 minutes, then lift and turn through 90 degrees so you get nice grill marks and cook for another 4 minutes. Turn gently and repeat the procedure on the second side, checking that the flesh is opaque. Transfer carefully to a plate and allow to rest for 5 minutes. Fillet the fish and serve each fillet with some of the stuffing on the side.

Make two cuts, using kitchen scissors, on the underside of the prawns, either side of the legs. Then remove the strip of shell with the legs attached. Nick the prawns, with the point of a sharp knife, in three or four places then toss together with the cayenne, salt and lemon juice – set aside for 30 minutes. Meanwhile, grind the fennel, coriander and cumin seeds with a pestle and mortar (or spice grinder).

Place the ginger, chillies, paprika, turmeric and lemon juice into a food processor and process to a puree. Add the ground spice mixture and process further. Stir into the yoghurt, then toss the prawns into this mixture and marinate for at least 30 minutes. Thread three prawns onto each of four metal or pre-soaked bamboo skewers.Place the skewers onto the hottest part  of the barbeque and grill for 4 minutes on each side.