Food wanderings with James Close from The Raby Hunt

We spent a few days over in northern France and Paris checking out restaurants – and admittedly, checking out Disneyland Paris (dining disaster in many ways, though at least eating at the Rainforest Café doesn’t feel like ‘work’).

Mindful that some Luxe readers might be heading over the Channel this summer, I thought I’d do a cook’s tour of some decent places to stop off if you’re taking the other A1. We went to the town of Lens. It’s the location of what’s essentially a regional branch of the great Louvre gallery. My eye was on food not paintings, however – though it is a spectacular and visit-worthy gallery. L’Atelier Marc Meurin is the eye-catching restaurant, bearing the name of the two Michelin-star chef who runs the kitchen team and who was born in Lens. The building itself is a sight to behold. A curvy, glass-walled space; airy and stylish.

It serves up a brasserie version of the chef’s three more traditional establishments elsewhere. Expect French classics – a tuna with beurre blanc was standout – lovely raw in the middle tuna. The man is famous for his marshmallows too! We went to the races in Chantilly – this year’s Prix de L’Arc de Triomphe is being staged there instead of Longchamp for one year only. The town is a horse-mad one – there’s a great horse-racing museum.

We stayed at the five-star Auberge de Jeu de Paume in the centre of the town and ate at the brasserie. And yes, ate Chantilly cream – no ice-cream in this town!
In Paris we dined on fabulous langoustine with a curried sauce, sounds boring but it’s a classic. The place was L’Ambrosie, a very stylish and traditional three-Michelin-star restaurant. Their grand claim is to produce the world’s best chocolate tart – admittedly it was rather special, so velvety and light – so who am I to argue?

The Amalfi lemon – maybe that’s worth another holiday drive? This luscious fruit is a favourite at Raby Hunt at the moment. In the kitchen Ryna has created a ‘doughnut’ with Amalfi lemon curd – tastes as good as it sounds. We’re also serving my take on a Mexican tostada. It’s on pork skin rather than a corn tortilla and brings together that base with a zingy, flavourful salsa with lovely ingredients from Ken Holland’s veg patch – radishes, tomatoes as well as anchovies and avocados – a definite taste of summer.

It was Harriett’s third birthday and I definitely lay claim to the title ‘world’s best dad’ when the bells of the traditional ice-cream van came round the corner to her party. Credit to the great team at Scoops ‘n’ Smiles who bring their traditional ie-cream van to parties and events. They serve up great ice-cream, lollies, tubs and loads of toppings for a perfect party sugar-fest. Brilliant – best party ever, even though I do say so myself! 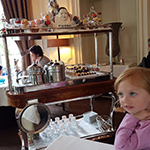 Life has been very sugary sweet the past few weeks. Dad has mentioned my fabby birthday party but I have also acquired a taste for posh Chantilly cream in France and Michelin-starred marshmallows at Marc Meurin.

It means my teeth-brushing has to be up to scratch too!