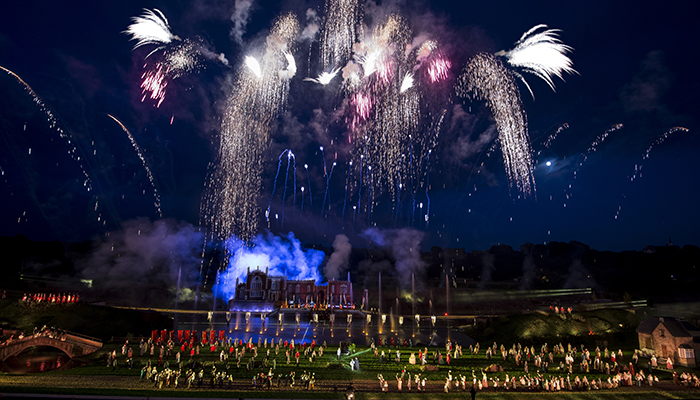 If you’re wondering if you should buy some tickets for the outdoor stage spectacular Kynren then quite simply, the answer is yes.

You’ll be blown away by the scale, the story and the surprises in store as a theatre spectacular formed by fireworks and farm animals colours the skies and draws you in to the history of our region and our nation. Add to that a cast of hundreds, pounding music, the patter of small hooves and the whoosh of galloping horses – and well, prepare for your jaw to drop.

The setting is a grandstand by a vast lake on which much of the story is performed. The background is a stage set which, thanks to skilful lighting, becomes a cathedral, a Durham street, a coalmine and even a back stage for Winston Churchill as the story of 2,000 years of English history unfolds.

It is so clever and very much a new and exciting form of outdoor theatre for this country. The format was inspired by Puy de Fou in France which stages several different historical performances every night. These inspired philanthropist and investor Jonathan Ruffer to bring a large-scale performance event to Bishop Auckland after he bought Auckland Castle.

His idea was to use land close to the castle and town for a regeneration project to transform the town. Kynren has been created as show which involves some 600 local volunteers, known as ‘Archers’ as part of the performance – plus nearly 100 animals. On top of this, volunteers act as cheery stewards and greeters.

They say it is ‘epic’ and indeed it is. Narrated from the point of view of a young boy called Arthur who is given a history lesson from Bishop Hensley Henson, the 8,000-strong audience is treated to a history lesson to surpass them all.

A life-size Norman longship rises from the waters in front of your very eyes. We encounter Shakespeare, the Roaring Twenties, the birth of railways, savage battles, the Industrial Revolution as well as tales of St Cuthbert and Lindisfarne monks. You’re stirred by a joyful recreation of Durham Miner’s Gala and stopped in your tracks by the sudden sobriety of a mining disaster.

The volunteer cast does a great job and there is never a moment when your eyes aren’t drawn to something happening on the vast performance area – that’s what makes it so absorbing. It is 90 minutes of enchantment: of storytelling with a proud Northern edge, made all the more atmospheric by its telling as the sun sets and with the proud backdrop of Auckland Castle overseeing it all.

The stirring story is told to a roller coaster of original music brought to a rousing finale with Land of Hope and Glory and much firework splendour. There are 14 shows from July 2 until September 17.