So much going on as we spring into summer. Elysia Agnew gets to grips with the cultural to-do list...

Exploring personal and collective memory loss and the importance of longing and belonging, Jumana Emil Abboud exhibits her drawings, videography and performance. The artist’s portrayal will comprise a selection of works including her film I Feel Nothing, 2013 – a video-poem inspired by a Palestinian folktale. She reflects on the cultural landscape of her homeland, Palestine. A truly unique and insightful study of fairytales, folklore and territories of the body.

A riotous, raucous and hilariously funny comedy comes to the Northern Stage this May. Michael Frayn’s multi-award winning production, Noises Off takes us on a behind-the-scenes tour of a shambolic production where everything that could possible go wrong… does. With only 24 hours until curtain-call, the touring troupe are destined for disaster as forgotten lines, backstage romances and hilarious malfunctions get the better of them. Winning both the Olivier and Evening Standard Award for Best Comedy in 1982, this is a must-see production that promises to have you falling into fits of laughter.

Over 60 venues across Newcastle and Gateshead will be participating in the North East’s annual free culture crawl. The Late Shows kicks off this May – a citywide party celebrating ten years of the festival. It’s the largest and longest running regional Museums at Night event in the UK and has become a highlight on the North East’s cultural calendar. Galleries, museums, studios, workshops and historical buildings across the city will open their doors after dark, offering workshops, installations, behind-the-scenes tours and exclusive performances. There will be sightseeing buses available too, encouraging festivalgoers to ‘culture crawl’ their way around town.

Newcastle’s Laing Art Gallery is giving visitors the chance to dive into the weird and wonderful world of Lewis Carroll’s classic tale, Alice in Wonderland. This exhibition will take you on a journey through the many generations of illustrations, musicians, artists, designers and filmmakers who have been inspired by the story of ‘the girl who went down the rabbit hole’ over 150 years ago. Works by Mervyn Peake, Ralph Steadman, Peter Blake, Arthur Rackham, Leonard Weisgard, Salvador Dali and the author himself, piece together a magnificent celebration of Alice in Wonderland. An incredible exhibition that really is out of this world.

Music, Magic & Marvellous Creatures brings music, food and fun to Beamish – after hours. The Living Museum of the North will re-open its doors after dark to welcome guests with a packed-out entertainment schedule. For the first time ever, Museums at Night will take place in the Pockerley Old Hall, with the chance to drive an engine on Pockerley Wagonway. You’ll also get the chance to see a spectacular eagle and vulture flying display as well as enjoy a short walk through the grounds on a packhorse. For those who wish to unwind a little, the Georgian Gin Bar will be open for a gin… or two.

The world-renowned Black Dyke Brass Band returns to Yarm for a concert at Princess Alexandra Auditorium, Yarm School. As well as the traditional brass band favourites, the programme also features music from Pirates of the Caribbean and a swing section. With 160 years of rich musical history, Black Dyke Band is the most recorded band in
the world with over 350 recordings and growing every year. It is also the most successful contesting band in the world having won the European Championships thirteen times, most recently in 2015, the British Open no fewer than 30 times (most recently 2014) and the National Championships of Great Britain 23 times (most recently 2014). No other ensemble in the world of music can boast such a record of innovation and success.

Tickets, £15 for adults, £10 for children are available from | thepaaonline.org

We’re all mad for a summer afternoon tea party. This May, Rockliffe will play host to an Alice in Wonderland Mad Hatter’s Afternoon Tea Party. In a celebration of Lewis Carroll, this family day will come complete with a delicious lunch, garden games and the chance to mingle with some of the book’s characters.

Colour, Surface, Description brings a wide range of artists to showcase a collection of paintings, ceramics and glasswork at the Kunsthuis Gallery in North Yorkshire. Experimenting with bright colours, interesting textures and shapes, this exhibition brings forth beautifully crafted creations. The gallery welcomes Dutch artist Corina Smits;, whose paintings explore nature and the landscape; Clare Maria Wood, who works with acrylic paints and printmaking;Catherine Keenan;, who exhibits her futuristic glasswork; Gavin Burnett, who creates ceramic tableware and Richard Wilson, whose ceramics play with colour and abstract patterns.

An enchanting modern classic returns to the stage this summer and theatregoers of the North East can catch it at the Theatre Royal this May. The Olivier award-winning production of Goodnight Mister Tom follows the story of an evacuated child during the Second World War. William Beech forges a remarkable and heart -warming friendship with his new elderly guardian, Tom Oakley. The celebrated literary favourite and BAFTA award-winning film is a truly enchanting tale that continues to inspire audiences. Bringing generations together in a heart-felt portrayal of love, loss and loyalty, this stage production is a must-see this summer. 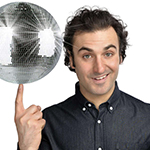 The North East’s favourite funnyman, Patrick Monahan returns to the region with his brand new stand-up comedy show. This laugh out loud performance is inspired by his memories of being an immigrant to the UK. Thoughtful, smart and brilliantly silly, The Disco Years is one of his best yet.

The Magic Weekend 2016 will return to St James’ Park, a must for sports fans. This sensational sporting event will feature all 12 First Utility Super League teams with three games filling up each day of the two-day event. But the fun doesn’t stop there; there will be a schedule packed full of activities for all the family including live music, stalls and a fanzone. The tournament will kick off with a clash between the Salford Red Devils and the Widnes Vikings, and the final showdown will see Hull FC take on Hull KR. Whether you’re a fan, or simply want to be part of this magic weekend, head down to St James’ Park this May for a rugby spectacular with something to entertain the entire family.

In the 60s and 70s, chart-topping hits such as ‘Sherry’, ‘Walk Like a Man’ and ‘My Eyes Adored You’ saw the harmonies of New Jersey’s finest skyrocket to stardom. Selling an astounding 100 million records worldwide, the Four Season’s song that stole the show was ‘Big Girls Don’t Cry’, a hit that showcases Frankie Valli’s impeccable falsettos. The East coast boys had created music that would stay with us forever. And Big Girls Don’t Cry celebrates everything we love about the band that took on the world.

Kick your summer party off with The Magic of Motown at the Sunderland Empire this June. Join the party as this glittering show celebrates the production’s 10th birthday. Thrilling its millionth music fan this year, this super-sensational show blasts out hit and after hit from artists including Marvin Gaye, Diana Ross, Jackson 5, the Supremes, the Temptations, Lionel Richie and many more.