BMW’s i3 is a cheeky head-turner that is proving something of a game-changer in the world of electric motoring. Kate Miles discovers why... 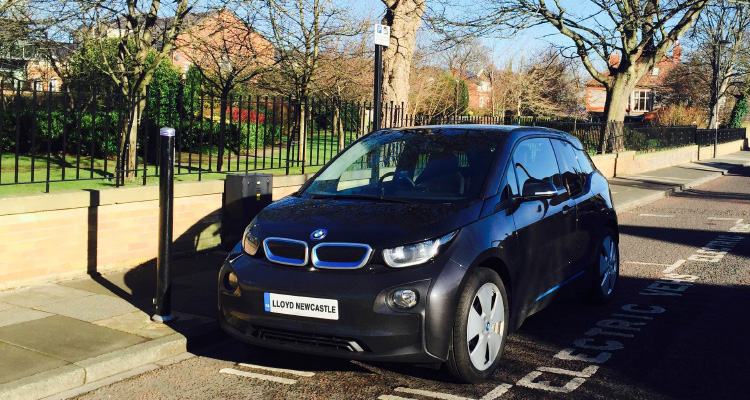 If Jamie Oliver did cars I’m thinking this would be it. The reason has something to do with the swoopy and smooth eucalyptus wood dashboard, very anti-pasti-appropriate. Makes you plan a picnic the minute you hop in.

In fact, the entire vehicle makes you want to plan for some zippy, play-away fun.

BMW’s i3 is like a super-cool play car: light, responsive, airy and generous to be in. Not to mention gadgets a-plenty.

At the press of a button you’re on your way – which takes a bit of getting used to when you’re from the world of the quaint old turn-key, engage gears and rev-up routine of starting a car.

It is impossibly easy to get used to though. That is largely thanks to your i-person on hand to help. In my case the chap was Graham Humble who is the iConsultant at Lloyd BMW in Newcastle where he and colleague Lewis Munnelly – the iGenius no less, are in-situ to drive you through the differences of electric motoring.

Graham was calm itself. A man of passion, infectious energy and reassurance when it come to the i3. He explained the model’s difference with clarity and simplicity.

It actually is push-button easy – and there’s really nothing you can do wrong. Important though to remember foot on the brake when you are starting up. Super-efficient Graham was a phone call away (at his kids’ bathtime I think!) when I couldn’t start the car!

However, that was a momentary lapse. Once you get to grips with the buttons, this is a car that drives itself.

You will never fear stalling at a junction ever again (if you ever did). You just press the accelerator and silently whoosh away.

At some pace it must be said. It is a dazzlingly fun way to zip around a city centre.

Though the i3 feels so sturdy, inside it is incredibly responsive and when you’re city driving you really have to keep your eye on the speed limit, it’s so easy (and tempting) to shoot off.

A car like this does require a shift in your motoring expectations and habits. Graham reassured me I wouldn’t run out of charge on a rush hour A1 and I believed him.

But you can’t fill it to full with petrol then forget about the next 300 miles or so.

You have to have an organised head on your shoulders. And ideally a short commute to work.

The battery will give you about 100-mile range. A back-up petrol extender gives you a further 90 miles or so and you flick a switch to activate this when your battery miles are getting low – which is easy to see on the dashboard display. At the max with petrol back-up you can reach 186 miles.

Any battery angst is something that would be assuaged by your familiarity with charging points along your route or at your destination.

I think if you bought one of these cars you’d be mad not to install the home-charger as well, which can be fixed to a driveway or garage wall so that plugging it in is as natural as plugging in the hair-straighteners every day.

The car comes with two chargers – one will plug into the mains at home alongside your vacuum cleaner and takes about eight hours to charge the car. The other is for the charging points you see in cities and new buildings everywhere with about a three-hour charging time.

Naturally, the i3’s information display screen can direct you to the nearest charging points on your route and this is as good as having Graham in the seat next you.

I powered up at the office charging point in Durham and the hotel/gym close to where I live. It’s a very easy plug-in process. It took about three hours to reach maximum. Some places – such as Dalton Park shopping centre on the A19 – have super-fast charge points which take about 20 minutes.

My work commute of a 60-mile or so round-trip meant the car needed charging after each journey, for my own peace of mind.

However, the average commute is apparently only 13 miles and if you were office-based with charging points on site, you wouldn’t need to think twice about the i3.

The cute (yes, cute is the word) car won very admiring glances from my female friends. Especially the doors. The front and rear doors open outwards like a double cupboard or wardrobe door, so the entire side of the car is open – so very clever and user-friendly – I reckon this was designed with a day’s-worth of kids, beach and that Jamie Oliver picnic clobber in mind. Brilliant.

The i3 requires a bit of effort and a mindset shift in your driving habits at first, but it is a real pleasure to drive and be in.

Squeaky-eco-clean and great fun: what’s not to love?

Party time for a top team

The award reflects outstanding customer service and business performance during 2015.

As well as this coveted award, Michelle Caveney received ‘Head of Business of the Year 2015’.

Lloyd Newcastle is part of the Lloyd Motor Group, with six BMW and MINI centres throughout the North of England in Blackpool, Carlisle, Cockermouth, Colne and South Lakes.

The evening was a great success all round for the Lloyd Group with Lloyd Blackpool BMW also picking up the renowned ‘BMW Retailer Customer Service Award 2015’.

Lloyd Carlisle was also in the running for the Customer Service Award as nominee, Lloyd Blackpool was nominated for ‘MINI Customer Champion’, Lloyd Newcastle for ‘MINI Aftersales Champion’ and Lloyd Carlisle for ‘BMW Retailer of the Year (Aftersales)’.

The awards were presented at the annual BMW, MINI and Motorrad Conference by Rob Brydon in February at the recently opened O2 Continental Hotel in London.

Michelle Caveney, Head of Business at Lloyd Newcastle said: “I am absolutely delighted for everyone here at Lloyd Newcastle. The business has transformed in the last 18 months and the award is a credit to every team member who are the real driving force behind our growth in both our performance and, more importantly, our customer satisfaction.

“We would also like to say a huge thank you to all of our customers who have been on this exciting journey with us.”