Charitable movement Middlesborough and Teeside Philanthropic Foundation has set up a new £100,000 fund to boost the region’s most talented sportsmen and women 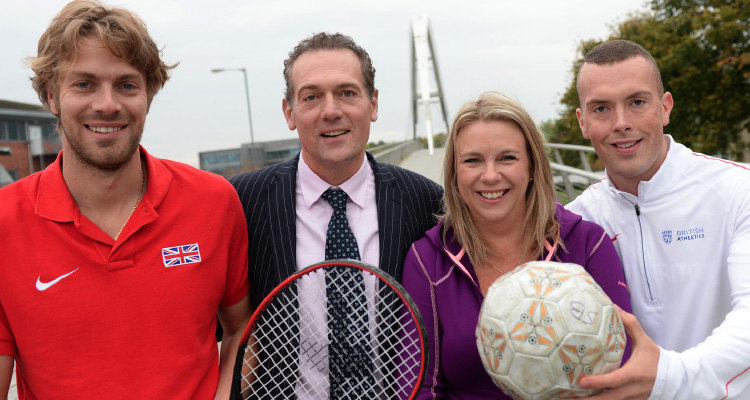 Backed by Teeside’s Chris Tomlinson, a three times Olympian, the Financial Assistance for Sportspeople on Teeside (FAST) fund aims to provide cash to boost opportunities for the region’s sports people as they strive to reach the top of their game.

Middlesborough-born businessman Andy Preston, who founded the foundation in 2011, said: “Teeside is renowned for its sporting talent, but many young people don’t fulfil their early promise because they are held back due to a lack of finance. That’s why we’ve created an initial £100,000 fund – to help those capable of reaching their full potential. Whether they need money for an overseas tournament or coaching opportunity, for vital equipment or some other crucial element to their development, they can apply to the FAST fund.”

The fund celebrates the foundation’s achievement in raising £1 million for good causes in Teeside since its launch four and a half years ago – a milestone that was further boosted by a £700,000 donation from an anonymous benefactor.

To apply to the FAST fund, visit fastfund.org.uk

A team of cyclists from Rockliffe Hall, County Durham, has raised over £5,000 for The Children’s Heart Surgery Fund at Leeds Congenital Heart Unit.

Twelve members of staff from the resort took part in a gruelling bike ride challenge in July, taking on some of the toughest terrains in Yorkshire, including Grinton Moor and parts of the Tour de Yorkshire route. They were riding in memory of a team member’s nephew who passed away just five weeks after being born with a heart condition.

The cyclists presented a cheque to Donna Webb, a senior sister at the Paediatric Cardiology Unit at Leeds General Infirmary and Alex Green, a community fundraiser for the Children’s Heart Surgery Fund, before kick-off at Middlesbrough’s home win against Queens Park Rangers on November 20. In total they raised £5,478.

Eamonn Elliott, chief executive at Rockliffe Hall, who took part in the challenge, said: “The charity bike ride was a real test of everybody’s physical and mental strength, but we all enjoyed it. We’re thrilled to have raised so much money for a cause that’s so important to many members of the Rockliffe team.”

CEOs, senior managers and business leaders from all industries in the region are being urged to give up the comfort of their bed for one night to camp out at St James’ Park for charity. CEO Sleepout Newcastle, taking place on March 3, will raise money for charities tackling poverty and homelessness in the North East. Now in its third year, the sleepout aims to raise over £50,000 for charities Changing Lives and The Newcastle United Football Foundation, which help both young and old people in the region.

Willing participants should book their place by emailing [email protected] to receive a registration pack. All participants must individually raise £1,000 or more either before the event or in the following weeks post-event. For further information, visit ceosleepoutuk.com

The brainchild of Gina Long, a friend of the Robson family and volunteer fundraiser, the auction attracted bidders from across the world, who competed to secure a wide range of sport and lifestyle prizes donated by the likes of FIFA, UEFA and the FA.

Over 160 lots were donated to help the charities, which included the Sir Bobby Robson Foundation and In The Game – the League Managers Association Charity.

Gina said: “Sir Bobby was a colossal global figure in football and the love and respect people still have for him has been reflected in the money-can’t-buy prizes that we were fortunate enough to receive. I cannot thank everyone enough for their support in making the auction a fitting tribute to an amazing man.”

To visit the auction, visit the-saleroom.com

Dr Richard Leck and Dr David Lawler from the Jesmond-based health group are members of local band The Vellocette, alongside David’s brother Andrew, and performed with The Whodlums and Friends at Newcastle’s 02 Academy in aid of Teenage Cancer Trust.

The trio joined six other renowned local bands, including The Ska Toons, Rigid Digits and The Middens, to support the headline act, who are billed as being the UK’s finest tribute to The Who. The evening raised £10,212 for Teenage Cancer Trust.

David said: “We really enjoyed joining some of the North East’s finest acts for what was a brilliant night of live music. It was a pleasure to support The Whodlums in their fundraising efforts for Teenage Cancer Trust and we loved playing on the main stage.”

A major fundraising concert at Sage Gateshead has raised over £80,000 for two North East charities Maggie’s Newcastle and Sage Gateshead.

Sponsored by Benfield Motor Group, ‘An Evening with Tim Rice & Friends’ was a sell-out and received rave reviews from the audience and critics. The money raised will help those affected by cancer and enrich people’s lives through music.

Event organiser, Carolyn Ramsbotham, said: “We are hugely grateful to Tim Rice and the performers for giving their time to help both charities. It was an unforgettable evening that brought together so many people from across the North East.”