BMW’s 7 Series is something of a plaything with lashings of dashboard toys - and if you’re in a tight spot it will even park itself... 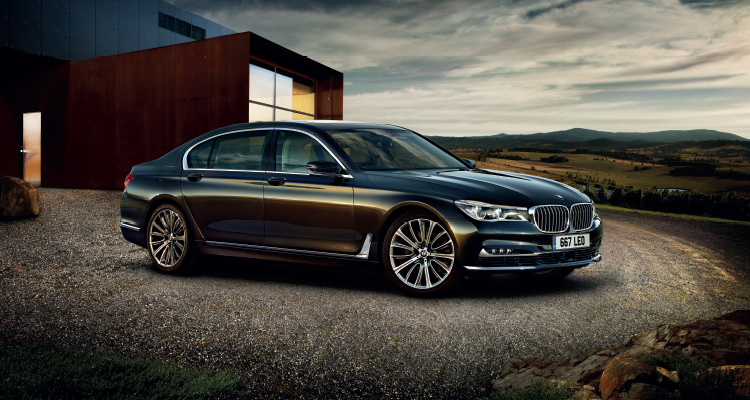 Having owned most of the BMW range I am embarrassed to say I have never owned the 7 series; I have always classed it as the businessman’s choice, so it’s never really appealed to me. For over four decades the 7 series has always been in the shadow of the much more popular Mercedes S Class.

The 7 series was launched back in 1977- a full five years after the S Class – and it has been trying to play catch up ever since. BMW’s competitor has always been used as a technological and engineering show pony for what the German car giant can do. Last year Mercedes sold two S Classes for every 7 series that BMW shifted. Factor in brand loyalty and it’s no wonder BMW have found it hard to steal sales away from Mercedes.

I drove the the stunning 2015 edition 7 series to the Lakes Distillery.

It was on the tight and twisty roads to the Lakes that I realised this incarnation of the 7 series, with its handling and overtaking prowess it has serious potential to be the one that finally takes the S-Class’ crown.

BMW have ploughed big money into a whole new platform along with new construction principles and materials. An adaptive fully airsprung chassis and pioneering infotainment system help give the car a real fighting chance against the S Class.

It is clear BMW is trying to get the flagship model back to the state-of-the-art status the car enjoyed back in the nineties and deliver the knockout blow to Mercedes.

Buyers have the choice of either six cylinder turbo petrol engine or a V8 petrol engine or what will be the best-selling engine in the range, the six-cylinder diesel engine. The options don’t end there with two wheelbases and either a rear wheel drive or four wheel drive model available and next year, buyers will have another alternative in the form of a petrol/electric plug in hybrid version. A 2.0lt four-pot petrol engine is twinned with a powerful electric motor. This technology combined will emit a measly 50g/km of CO2 which for the size of this car is quite simply outstanding.

My car was fitted with BMW’s sport automatic gearbox. Alongside the sport gearbox, launch control also featured and was a welcome way of enhancing the car’s sporty nature. Despite the car’s size it handled exceptionally well indeed, holding the road more like a hot hatch than a saloon.

BMW have gone to great lengths to make this car not only lighter but a real driver’s car. When you open the door you are greeted by a badge saying ‘carbon core.’ This carbon fibre shell isn’t like the i8 or the ones used in McLarens. The use of carbon and aluminium help make this car 130kg lighter than the outgoing 7 series, and it’s almost as quiet as a library even at speed.

The long wheelbase 7 series is exactly the same length as S Class, but the BMW beats the Mercedes for headroom and the car’s boot is also taller and larger than the Merc’s; truly a businessman’s dream!

Anyone wanting the 7 series for chauffeuring will need to decide on one of two rear passenger based options. The first is the executive package, priced at £2850. The second comes in at £4815 and is called the comfort package.

For close to £5k, rear passengers get heated and massaging comfort seats, rear seat backs also have tablets, they help control the intensity of the seat massaging to changing the channels of the in car digital TV and it also doubles as a web browser that can be removed if necessary.

The designers have gone all out to make sure the interior matches the sleek, stylish bodywork. The switchgear looks and feels solid to the touch. The heads-up display is 75% larger than other BMW’s and the colour selectable ambient lighting looks great after a long day.

All cars get professional multimedia and navigation systems which are operated in one of three ways. Using the familiar iDrive controller, the touchscreen interface or via the optional gesture control. My weapon of choice was the gesture control. To be able to change station and up the volume with the wave of a hand was something I’ve never seen in a car.

Every version of the 7 Series is fitted with wireless phone charging, Wi-Fi hotspot, Navigation Pro, DAB radio, comfort seats and all round four-zone air con as standard. The car’s seats reminded me of the stitching found on Bentley’s with material quality and refinement that really is class leading.

Another great feature is the remote park function on the car’s remote control. If your parking space is tight, just jump out of the car and press the remote to watch the car park itself. The car’s laser lights double the range of the best LED lights and they won’t blind oncoming drivers.

The latest 7 Series not only looks sporty but it really is a fabulous car to drive, with the car’s technology really making you gawp and smile. If you are after a sporty drive and with luxury to boot then look no further than the BMW 7 Series.