Stay in a piece of modern architectural history. Birmingham’s Rotunda is a Grade II listed building with a funky vibe in a city of surprises, says Kathryn Armstrong 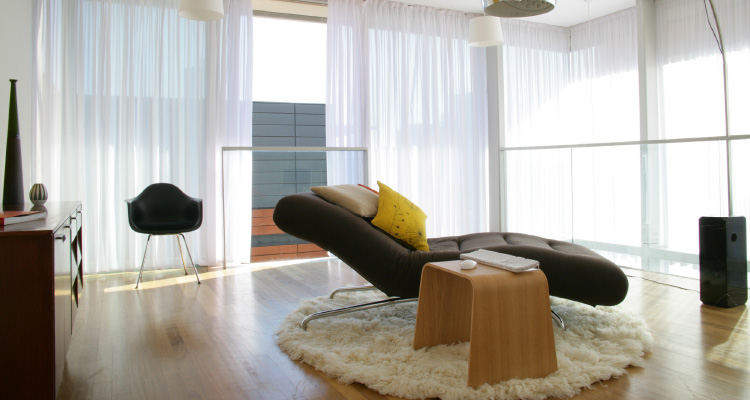 If you’ve travelled on the train through Birmingham or visited the city before, the huge cloud-grazing Rotunda in the city centre is a recognisable landmark.

The circular high-rise has grown up to become a towering symbol of Birmingham’s on-going cityscape revolution.

Once, its location by a then-grubby Bullring shopping centre was unlovely and unwelcoming.

Today Rotunda goes by the name of Staying Cool where the top floors of this uber-tube are given over to stylish boutique apartments while lower floors are sought-after residential homes in their very desirable city centre location.

How does Zara sound as your convenience store on the ground floor? M&S food hall a short hop or the curvy contours of the snail-shaped Selfridges building a very near neighbour?

Staying Cool apartments have won loads of awards and it’s easy to see why. They offer great accommodation in design-savvy surroundings and a service with much thought added.

A head for heights is good. On the 18th floor the full-length windows actually slide all the way back (the thought is making my tummy flip just writing about them) – about as bold a design as is legal – there are waist-high safety barriers too, I might add. It all makes for some gasp-worthy views over the sprawl of the city and its surroundings.

Rotunda was designed in 1961 by architect James Roberts as an office block – the original plans included a rotating restaurant at the top, a Vegas touch which never happened.

In the 1990s, demolition was threatened but local opposition and the work of English Heritage saved the building and it was granted Grade-II listed status before architects Urban Splash took on the redevelopment.

There is much attention not only to design detail but also to the touches that make a city break work.

Apartments are white and modern with easy-use stuff like a convenient kitchen which has a basket of fresh oranges and a juicer waiting for you, two kinds of coffee maker and fresh coffee for each. Plus milk in the fridge and really lovely toiletries in big bottles in the bathroom.

In an homage to the area’s car-making heritage accommodation goes by the name of mini, clubman, maxi and roadster penthouse.

Retro-style photography has been commissioned for the apartments and the furnishings are design-led and super-comfy. What they’ve done is think of somewhere they’d like to live in a city – then made it happen. It’s something of a ‘blow the budget’ approach which is a nice surprise. Furniture is from up-and-coming designers and studios, for which they namecheck Naughtone and Anne Kyyrö, as well as sourced original pieces which are then refurbished – such as Eames, Jacobsen and Panton pieces.

In fact it is like staying in the home of your coolest child-free friend who doesn’t have to worry about practicality and whose place is awash with designer names like Timorous Beasties, Tom Dixon and Paul Smith.

As for sleeping pleasure, sink into beds pocket sprung with memory foam.

So that’s your shut-eye and late-night glass of wine-meets-view all sorted.

What to do in Birmingham?

There’s loads. You can max out on shopping at the likes of Harvey Nichols and Selfridges or my own favourite, the glorious Cos. The Bullring is a shopping wonder and a lavish John Lewis opens later this year, pretty much adding the final touch to what has been a major city centre development out from New Street Station.

The Jewellery Quarter is home to more than 100 specialists and craftspeople. Part of the appeal of going direct to makers is that many have workshops on the premises, so a special gift can be commissioned on site.

It’s home to a buzzing arts scene with galleries, wedding shops and fashion specialists mingling with restaurants, serving everything from Neapolitan to Nepalese cuisine. For a drink and a dance St Paul’s Square is home to Jools Holland’s legendary Jam House and Après in Summer Row.

Birmingham is home to more canals than Venice (remember TV’s Rosie&Jim on that barge as a kid?) and the area around Brindley Place makes the most of this heritage with waterside bars and restaurants. This area links to the city’s vibrant Symphony Hall (a good range of concerts similar to Sage, Gateshead) and the ICC arena – and the Sealife Centre if you have small people to please…

Worth a trot a bit farther afield are bustling suburbs like Harborne and Edgbaston. The former is more Jesmond-like with a student presence and bistros, good eating places and the cool School Yard re-development of a gorgeous red brick school now home to shops and good eating places.

Edgbaston is the place for cricket but it’s also the city’s most exclusive residential area. Try a visit to the glorious Botanic Gardens.

Cool things to do in Birmingham >>

> The city’s lavish new library looks like a jewelled chocolate box – inside you can listen to music from a comfy armchair, play a public piano or have a game of ping pong. Choose a book of course – or take to the roof terraces for dazzling city views.

> Gaze at one of the best Pre-Raphaelite collections in the world, at Birmingham Museum and Art Gallery  where The Staffordshire Hoard is also on display.

> For contemporary art, Ikon Gallery is the place to head – a nice place to mooch and stop for coffee.

> The Custard Factory is the place to find independent shops, galleries and a Saturday vintage flea market.

> Lose yourself in a planetarium show at the impressive Thinktank.

> Explore the Arts & Crafts wonder of Winterbourne House and Garden.

> Car fans can head for the Jaguar Experience & Visitor centre in nearby Castle Bromwich. No ordinary factory. Built in 1936 to produce the iconic Spitfire fighter that defended Britain against the Luftwaffe, Castle Bromwich has been the home of Jaguar since 1977, and today produces the XJ luxury flagship and the thrilling F-TYPE sports car.

Everyone, whether petrolhead or youngster, will enjoy seeing these sleek machines coming together and hearing the rasp of their V6 and V8 engines as they come to life. “It’s like a toy factory for grown-ups,” as one visitor put it.

> Visit Britain’s oldest working cinema, The Electric, and treat yourself to a ticket for an indie film and enjoy waiter service to your private sofa.

> We were impressed by Pushkar in the bustling Broad Street, a real blingy affair with some of the best Indian food we’ve ever eaten. It’s all cream leather and slick interiors with a blingy cocktail bar and live music spilling out on to the pavement.

Outstanding luscious and different dishes and brilliant service. Recommended is the Qasoori Methis Murgh, a tender chicken breast dish with fresh fenugreek and garlic. Also, Acari Gosht, semi-dry lamb in a piquant sauce of pickling spices, ginger and tomatoes, tempered with whole red chilli, mustard seeds, kalonji and fresh curry leaves. If you like the combo of glamorous cocktails with your curry and a spot of people-watching, this is definitely the place.
www.pushkardining.com

> By comparison, head for balti food in no-frills surroundings, plastic chairs, naan the size of a table and bring your own booze. Awesome food, great value. Balti Triangle is the centre of Asian cuisine. Bringing together the Sparkbrook, Balsall Heath and Moseley areas of the city.
www.balti-birmingham.co.uk

> A taste of Thai in the suburbs, head to Harborne high street for a Thai extravaganza at Sabai Sabai. Refined Thai tastes, especially good seafood combinations and as much heat as you like.

> Wine tasting with a difference. Loki is a cosy, tucked-away wine bar in a Victorian arcade in the city centre. At any one time you can taste up to 40 wines by the glass, using specially imported wine preservation machines. You can taste each wine from as little as 69p a sample or get a wine tasting card from £10 then sip your way though the bottles until you find a favourite!

> Birmingham’s four Michelin starred restaurants: Turners in Harborne; Purnell’s and Adam’s in the city centre and Simpsons restaurant in Edgbaston.

Information on things to do in the city www.visitbirmingham.com