Limitless funds, fabulous friends and a 50th birthday to celebrate? Obviously the urge is to pop a couple of hundred pals on board a chic French yacht and sail away along Croatia’s luscious Mediterranean coastline.

Yes, I’d do that. And it’s exactly what was happening on Le Lyrial once we’d finished our too-brief time on its inaugural journey on the Mediterranean.

The temptation to stow away and then make friends with the birthday boy was huge. We’d only spent three nights on board and really didn’t want to succumb to dry land. We wanted to join that birthday party.

Whatever your perception of the word ‘cruise’, Le Lyrial will shoot it to bits. This is definitely more of a floating boutique hotel.

One where stylish people elegantly waft, where there’s the soft burr of  French accents, the sound of champagne corks popping and where you glide with ease through light, airy corridors with shimmering azure blue and white interiors, pretending you too own the vessel.

You won’t need to throw an ‘it’s mine’ towel on a sun lounger because there are always plenty of both available.

No need to queue for lunch or dinner, everything seamlessly slips into place and your fellow guests are very well behaved.

Oh, and there’s always a glass of chilled Veuve Clicquot with your name on it, that’s the ‘house’ champagne. And just when you need something to accompany your coup, an iced bowl of oysters will make its presence known.

Le Lyrial is the newest of the Ponant sailing fleet, a French sailing company that specialises in small ships and bespoke destinations, journeys and expeditions. 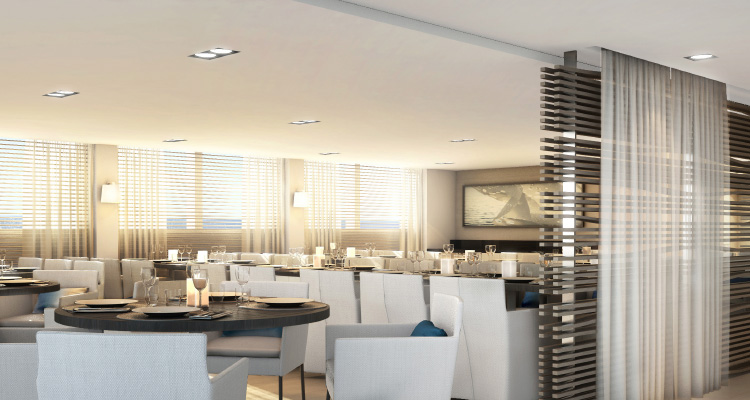 They have state-of-the-art vessels that can cope with the rigours of  the Antarctic and the North West Passage, taking passengers on journeys of a lifetime.

Itineraries are worldwide, depending on your need for sun, speed, culture or thrills with a breath-taking array of destinations and a collection of experts and speakers who accompany specialist  journeys.

The style is as you’d expect of a French company – sleek and unshowy, elegant and pared-back luxury.

We joined Ponant’s Le Lyrial in Venice, which is about as good as it gets in terms of a sail-away journey.

Suggestion one:  book a water taxi to take you from the airport into Venice. It’s a George Clooney VIP moment to be relished. The approach to this stunning city is one to behold and the splashy thrill of zipping up towards that domed isle is one to remember.

Suggestion two: grab a glass of champagne as you take in the Venice views when you sail out of the city.

The ship is neat enough to have better access than the huge cruise ships so you have great views for those all-important photographic memories – but they are definitely made special with a chilled glass of champagne to toast your journey – and in our case, Le Lyrial’s first.

You get a magical vista of Venice, one you don’t see on foot as the busy central area gives way to the more urban side of the city and its unexpectedly green waterside walkways and parks. The speed is gentle, the waters easy and the early evening light magical. From the start of the journey you can’t fail to be lulled into your new-found passion for sailing.

At this point I took off my watch and hadn’t much of a clue of time for the next few days. It was time to relax, as simple as that.

It was also time to explore Le Lyrial and our cabin, a twin with balcony.

A daily ship’s bulletin signposted the ‘things to do’ throughout the day and into the night.

You do as you please.

If you’re not a ‘joiner’ then sit back where you like and relax.

If you are then there are quizzes, destination talks and activities to choose from.

Once you get your bearings make it a mission to try every lounge and bar (yes, taxing stuff). 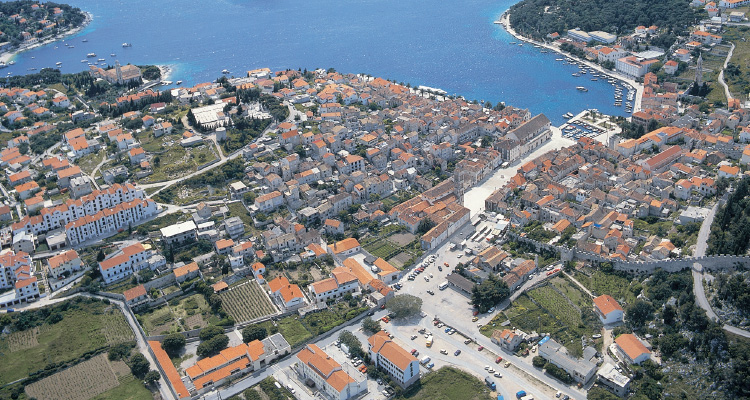 We went big on reading and lounging, being workaholics on dry land. It was the ultimate in R&R.

The first night was a fine dining gourmet night, with exceptional food and paired wine.

We followed it up by a trip to the entertainment – a bit cheesy to be frank with crew-led dancing straight out of the 80s.

The following night this took a different turn altogether when a group of 40-something Belgians brought their own sounds and turned the dancefloor into a house music session.

The third night our entertainment consisted of a bit of carousing by a contingent of Australian paediatricians marking the last night of a conference they were holding on board.

All proving that this indeed can be your own party palace.

On day one we sailed and stopped at the Croatian port of Hvar, a slick harbour lined with smart cafes and with its own stylish vibe.

Le Lyrial’s size means it can sail to smaller ports. From Hvar’s harbour you can walk to craggy coves and swim in crystal clear waters or just take in the history of the unspoilt town.

We found a rock and dipped our toes.

The following day we sailed to Rovinj whereLe Lyrial berthed overnight. The small town is picture postcard pretty and you must take a walk to the characterful old town with its landmark church and dazzling views along the coastline.

Much less glitzy than Hvar, Rovinj dances to a laid-back waterside beat with some local shops and markets.

That holiday pastime of sitting with a drink watching the world go by goes down particularly well here.

At Rovinj we ate at the restaurant on Le Lyrial’s pool deck, surrounded by the town’s gentle scenery.

On deck, chef cooked us prawns and steak on the griddle and we chose from a stylishly seasonal salad and starters buffet.

It was impressive and memorable, especially when Le Lyrial played host to a dazzling sunset.

I have only been on a cruise ship once before. What I loved best about being at sea was the awareness of the changes in the day that you don’t notice so much on dry land.

The sun shines as you wake then when you get to early evening it shifts to chillout-mode. Watching the sun start to set sitting on the pool deck with Veuve in hand is well-being at its finest.

Granted, this ship was brand new so it was going to be as sharp and shiny as they come but the impression is one of space, calm and ‘do-as-you-please’.

There are just 122 staterooms and suites so that’s about 250 guests on board at any time, on what is a vast space.

Le Lyrial is the last in a series of four latest-generation sisterships, which, because of their size and design, is unique in the cruise world.

There are two indoor bars, an outdoor bar, relaxation area on the pool deck, lounges, gym and spa, a theatre for talks, films and shows, a library, an Internet space, a games area with Wii consoles, as well as cosy spaces for gathering and relaxing.

On our last day we woke very early to see the sun rise as we sailed back into Venice.

We felt privileged to watch the city wake up as we glided on languid waters and prepared to pass on our all-too-brief holiday palace to the party people.

Le Lyrial isn’t the only yacht making its presence felt in the Med’s Croatian hotspots.

The coastline with its miles of hidden coves is popular with the sailing crowd and places like glitzy Hvar have celebrity fans returning time and again for the culture, unspoilt towns and relaxed way of life.

The Croatian coast has become known and famous as a beach party destination, as well as a romantic and private sanctuary – and a place to stop.

Hvar, where Le Lyrial stops, has featured in Lonely Planet’s top ten towns and regions to be visited, largely because of its reputation for great beach parties.

The Sunday Times Travel Magazine also included Hvar on the list of 25 best islands in the world.

Indeed, celebrities have been a common sight on Hvar’s shores.

• Tom Cruise fled to Hvar after the announcement of his divorce from Katie Holmes.
He sailed to the island on a magnificent yacht where he patiently gave out his autograph and was photographed with numerous fans.

• Tina Turner sailed up on the Lady Marina, one of the 100 largest yachts in the world, a 64 metre-long vessel with its own heliport.

• The biggest yacht in the world has visited Croatian waters, the 170m Eclipse, owned by Chelsea boss, Roman Abramovich.

• And finally, this might float your boat – or not – the beauty of Hvar delighted the famous rapper MC Hammer.
He wrote on his Twitter: “I feel the energy everywhere. Night life in Hvar is fantastic. The sea is so blue that I cannot believe it’s real.”

Departing from Newcastle on 24 May 2016, a 7-night Adriatic cruise aboard Le Lyrial on an all-inclusive basis costs from £3,999 per person sharing a deluxe stateroom, including return flights via Heathrow to Venice and private water taxi transfers.

Travel specialists from the Ponant team will be joining The Travel Bureau’s Cruise Show at The Biscuit Factory, Newcastle, on Sunday October 4th. They will be on hand to discuss all the Ponant specialist cruise itineraries | travelb.co.uk