Roaring Back Into The Lime Light

Despite its price tag – a snip at £237,500 – the Bentley Continental GT3-R is worth every penny, says Bob Arora 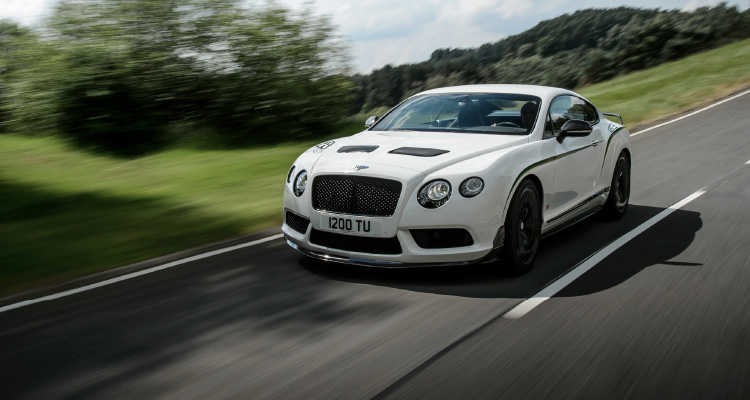 When you mention the name Bentley, the first thing most people think of is the company’s illustrious racing history. The company’s founders W.O & H.M Bentley were keen racers and believed to win a car had to be fitted with the biggest engine possible. W.O was never a fan of superchargers, unlike other manufacturers. Again unlike the competition, it was his W.O’s cars and drivers that went on to take Le Mans by storm.

The first time I drove a Bentley was when they introduced the Continental to the world. The stunning car had all the qualities you would expect from a brand as historic as Bentley. A beautiful dash along with the most luxurious materials matched upon opening the car’s doors. You were greeted with the most sumptuous leather and wood, whilst the buttons and switches just oozed quality.

Bentley managed to bring down the average age of its buyers as footballers and their WAGs marched down to the nearest showrooms to order their cars. As you might expect, Bentley allows its customers to customise their cars to any specification their heart desires. Paris Hilton and Katie Price, for example, decided to order pink cars which I am sure wouldn’t be everyone’s first choice of colour!

This car actually saved Bentley’s future, transforming its fortunes. It went from selling just a handful of cars a year to over 10,000 at its peak. This brings me neatly onto the car I drove this month, the Bentley Continental GT3-R. This stunning road legal completion car is a tribute to Bentley’s maiden season back in international motorsport after a hiatus of more than a decade. Despite the break, this car has firmly thrust Bentley back onto the racing stage. Only 300 of these amazing machines are being made and I am sure they will sell as quickly as they roll off the manufacturing line.

Believe me when I tell you this car is the most performance focused road car out there and its display of engineering is nothing short of breathtaking. Fitted with a responsive 4.0lt V8, which I must admit wouldn’t have been my first choice, the GT3-R features the addition of new turbos, a titanium exhaust and recalibrated ECU resulting in an impressive 572 bhp. The first Bentley to hit 62mph in under 4 seconds, the GT3-R is 100kg lighter than the speed but still tips the scales at around 2.2 tonnes making its performance all the more amazing. One thing that did surprise me was the car’s top speed is only 170mph. I personally thought Bentley would have cranked it above 200mph.

Starting the car literally gets the hairs on the back of your neck standing up. The exhausts’ growls are just unreal. Add to this some orchestral pops and crackles and you have a symphony to wake your neighbours! The car’s standard air suspension is still here but has been tinkered with and adapted. The car now feels more planted to the road but beware, it’s 21” alloy wheels do thump over some of the finest roads Britain has to offer. In sport mode the car really comes to life. Holding its gears as long as is mechanically possible, the GT3-R produces a sound which can only be described as legendary. In stark contrast, driving the car in D mode allows you to drive around with much more subdued noise. This makes it much more discreet around town or in traffic.

Flooring the cars throttle and you can’t help but notice the fantastically smooth delivery of performance. The steering gives the driver massive amounts of feedback – I was always impressed with the Continental’s handling, but the GT3-R takes it to the next level. Twinned with the blessing of higher grip levels and much better body control, partly thanks to the 40:60 front to rear torque bias, the latest Bentley certainly lives up to its racing pedigree. Bentley has, for the first time, introduced rear axle brake delivered torque vectoring. In a nutshell, despite its size, it feels like a hot hatch around country roads. When you see the GT3-R for the first time you can’t but help notice the rear wing which wouldn’t look out of place on a boy racer’s runaround. The door feels unbelievably heavy and it’s a workout just opening and closing it.

Bentley has ditched the wood for sporty-looking lacquered carbon fibre trim which is continued around the dash.

The rear seats have been replaced by a beautifully upholstered storage bay with the remainder of the interior screaming Bentley, with yards of hide and the most stunning diamond quilted Alcantara. It really is a work of art and it’s obvious to see where all the man hours go in making this thug of a car as refined as a gentleman. The car costs £237,500 which I know is not cheap but as mad as it may seem, I honestly think it’s worth every penny. If the famous Bentley boys were around now this car would really have done them proud!