One made for fun on the run, the BMW Active 2 is a Mini that’s been stretched to BMW status with bags of personality and driving pleasure

As most people are aware, BMW have always been marketed as being the ultimate driving machine. I would agree with this, having owned quite nearly every car in the range. From the 1 series to the 7 series they are all rear wheel drive which makes for a great driver’s car. In a nutshell, the front wheels are allowed to steer while all the power goes to the rear wheels. In California or Dubai where the weather is usually amazing all year round the rear wheel drive works a treat. Now imagine the scenario; we have a freak showering of snow, you get ready for work and you get in your lovely BMW. It’s at this time of the year when normally smug and happy BMW drivers face their worst nightmare, getting stuck in the snow at the side of the road. Unless you have winter tyres fitted you’re going to see every smug Audi driver flying past you. Thankfully, BMWs are now available with 4 wheel drive technology.

This brings me onto a new market being targeted by BMW; despite joining the MPV party very late indeed they have launched the Active 2 Tourer. Despite coming in to the market which has been decreasing in sales as customers prefer to buy chunky crossovers instead like the Nissan Qashqai or the Peugeot 2008, the BMW is facing even more competition from the VW Golf SV, Mercedes B Class and the Ford C Max. Most MPVs tend to be very boxy and high-sided, making them visually not as cool looking as the new breed of crossovers.

BMW have done a great job with the Active 2 as it is very dynamic looking indeed. They have styling cues from both the coupe 4 series and the 6 series. The car’s trademark kidney grilles are imposing and sit between the headlights. The designers have worked hard to give the car subtle creases and break up the lines of the bodywork. The car’s interior is very lavish indeed with aluminium and lashings of leather all over. The sporty red stitching helps give the car a real premium feel, too. They have ditched rear wheel drive and given this car front wheel drive technology; they have gained invaluable experience thanks to the Mini.

The car’s interior is very lavish indeed with aluminium and lashings of leather all over. The sporty red stitching helps give the car a real premium feel

The range is priced from £22,500 – £32,350 for the range- topping M Sport model. The car’s driving dynamics are somewhat limited due to the car’s shape and size, the car’s steering is well weighted and very accurate indeed. Press the sport button and the steering firms up and feels artificially heavy. Turn into a bend and you will notice some movement in the body but even quick changes in direction never unsettle the car. I am sure the car will receive a 5 star Euro Ncap rating partly thanks to the pedestrian warning and the city brake function. Pedestrian safety is increased as the city brake is automatically applied if the driver fails to respond to an obstacle in front of the car. 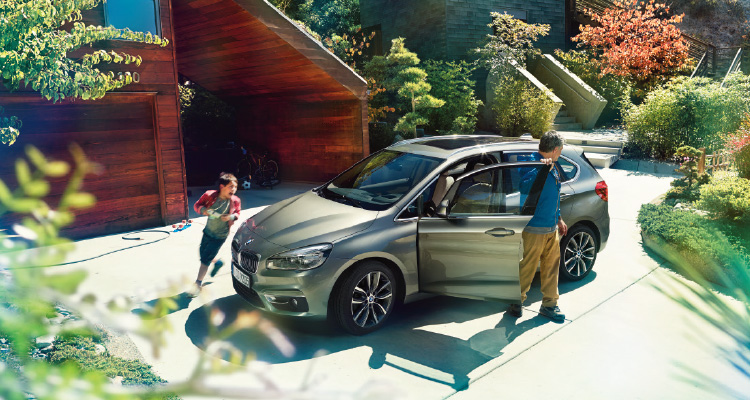 At higher speeds the wind noise is eradicated by high A pillars, wing mirrors. The ride quality is very smooth despite riding on 18” alloys. Another great feature were the electrically folding rear seats; once folded, there is 1510 litres of boot space and with the seats up there is still a very useable 468 litres of space. Both the Golf SV and Mercedes B Class are slightly larger than the Active 2 which suffers with slightly less legroom. The BMW trumps it competitors with its excellent build quality and stunning interior. There are plenty of storage bins and the arm rest doubles up as another storage box. There is ample room for three adults in the rear; the high roofline allows plenty of headroom for passengers. After spending a few days in this car I really realised just how nice it was to drive, anyone looking to buy a MPV with a bit of style and great driveability need look no further, as this car really does tick all the boxes.