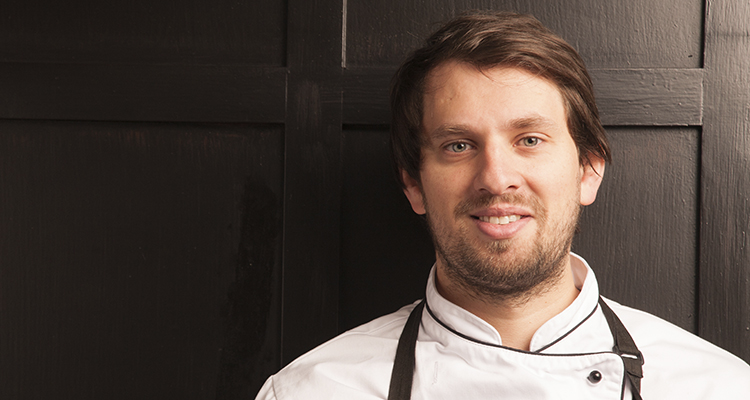 Summer’s here and my Big Green Egg really comes into its own.

True, I am fairly evangelical about this thing, what many would call a barbecue, but to me the ultimate. A barbecue is for life, not just for summer and BGE has been a fond fixture in the kitchen here at Raby Hunt pretty much since we started.

The difference? The Big Green Egg is made from clay – this helps whatever is being cooked to really retain moisture. We use it for many things on the menu; it imparts a different flavour to vegetables as well as meat – and I’ve been using it to smoke my own chicken, which was spectacular! The plan is to smoke other birds, pigeon, quail, things that would sit well on our menu.

My technique with the chicken is to roast it to a high temperature. The barbecue cools then I put smoking chips in and the chicken stays in the egg (!) for three to four hours to allow for the smoking process to happen. The results are great – I can’t recommend the BGE enough – it works pretty fine on sausages and burgers too – we had a staff barbecue on it recently!

The abundance of summer produce prompted me to create a dish that was like a walk through Vallum Farm. Grower Ken Holland is the go-to veg man at Vallum in Northumberland who most chefs in the North East and an increasing number nationwide seek out for obscure varieties to adorn their plates and thrill their palates. The dish features 25 different vegetables, I kid you not.

Lurking in that ingredients list are baby turnips, varieties of beetroot, beet and pea purees, crispy kale, fennel, nasturtium… on it goes. I created a crispy scallop crumb that we add to the dish for some texture and another flavour. The result is a delicate dish that really makes the most of the abundance and freshness of produce at this time of the year. The ladies like it. We call him the coffee dude. Andrew Henley is the man behind Railtown Coffee, based in Darlington. He is as passionate as it gets about his beans and determined to get bean to cup via roaster in less than four weeks for us. We work on the basis of seasonality and freshness here at Raby Hunt and he applies that ethos to the gathering and roasting of beans that we use for our filter coffee.

We wanted the way we serve coffee to reflect everything else we do in the kitchen – so we can guarantee pure flavour and a very specific taste to our coffee. We use coffee harvested from small single estates, artisans you might say. They are sent over and then roasted to our specification. The resulting flavour is full of personality rather than the wham bam of an intense espresso.

There’s a lightness and complexity to the flavour that makes it like a digestif after dinner. Andrew, who owns West Park Café in Darlington where he serves up his coffee, also supplies to cafes in the area, including Olivia’s in Stokesley. Worth sharing a coffee with him. We’re going a bit crazy with elderflower foraging at the minute. Opposite the restaurant there’s masses of the stuff and we’ve been making five batches of luscious cordial every week to stockpile. I’ve been playing with oyster and elderflower. I slow-cook oyster then serve in the shell with some of the cordial and with some of the flowers, adding a touch of gooseberry liquid. Something unexpected, people love it. If you want to try your hand at the more conventional cordial, here’s our not so best-kept secret of a recipe.

We seized on a lovely sunny Sunday and headed for The Star at Harome recently. Always a great place, I love what Andrew Pern does and we were soon settled in the garden with a bottle of English fizz, a really impressive Bloomsbury Brut from Ridgeview. As the fizz went down we knew we were meant to stay and booked in for the night – in a room with its own pool table, thanks.

The nice place about The Star is that you can start off at the cosy pub end of things then move on to the cocktail bar outside as the mood – and weather – takes you. We settled in fine – and after a hearty walk even managed to then head to The Pheasant to eat later.

A chefs’ night out isn’t always a busman’s holiday. We tend to go berserk when we’re let loose – it must be the thrill of being let out of the kitchen at night-time with other chefs. The occasion for me gathering alongside Kenny Atkinson and chefs from Box Tree, Ilkley and Black Swan, Oldstead, was the opening of The Man Behind the Curtain in Leeds.

Chef is Michael O’Hare, for whom the phrase ‘larger than life’ was invented. The flamboyant blonde, rock-loving chef is as wacky as it gets in some respects – on the plate his food looks like a work of art and presentation is all. He worked at Noma in Denmark and his new Leeds place is above Flannels in Leeds.

There were many highlights in the tasting menu – amazing pea veloute, a veal dish dedicated to chef Bernard Loiseau. Langoustine in mussel consommé with parsley oil was served in little spoons attached to a spoon ‘tree’ – all very spectacular. Very different, very inspired and a product of dedication. Lots of chefs late into the night, yes it got messy. I walked out and it was 5am, too light too soon!

Black Swan at Oldstead, really gets my vote for a superb Sunday lunch, somewhere with cracking food but also an atmosphere that makes you want to stay put for a while. Van Zeller in Harrogate is a good place for a bit of a best-clothes day out of lunching in the cultured surroundings of Harrogate. The place itself is in very desirable courtyard and you’ll be wowed by the great-value lunch tasting menu. Wensleydale Heifer ticks my box when the kids are in tow and gutsy food is needed. Fish and chips there takes some beating and the place is really relaxing and good-humoured. I am trying to get to grips with utensils at the minute, having a decent crack at it but hands so much simpler.

I loved staying at The Star where my favourite thing was the beef with its runny red juice at my Sunday lunch.

Daddy had something called a parfait for his pudding which looked just like an ice-cream sandwich – I pinched all of his homemade lemon juice because it was so very juicy, even though it did make me pull a bit of a funny face!